About six years ago, when we titled “Are the missiles returning to Comiso?” in il Manifesto (June 9, 2015), our hypothesis that the US wanted to bring their nuclear missiles back to Europe was ignored by the entire political-media arc. Subsequent events have shown that the alarm, unfortunately, was well founded. Now, for the first time, we have the official confirmation.

A few days ago, on March 11, one of the top US military authorities, General James C. McConville, Chief of Staff of the United States Army confirmed it. Not in an interview with CNN, but during a speech at an experts’ meeting at the George Washington School of Media and Public Affairs – here we have the official transcript General McConville not only reported that the US Army is preparing to deploy, evidently aimed at Russia, new missiles in Europe, but revealed that they will be hypersonic missiles, an extremely dangerous new weapon system.

This decision creates a very high-risk situation, similar or worse than that one Europe experienced during the Cold War, as front line of the nuclear confrontation between the US and the USSR.

Hypersonic missiles – their speed is 5 times faster than that of sound (Mach 5), that is more than 6,000 km / h – constitute a new weapon system with a nuclear attack capacity superior to that of ballistic missiles. While these follow an arc trajectory for the most part above the atmosphere, the hypersonic missiles instead follow a low altitude trajectory in the atmosphere directly towards the target, which they reach in less time by penetrating the enemy defenses. 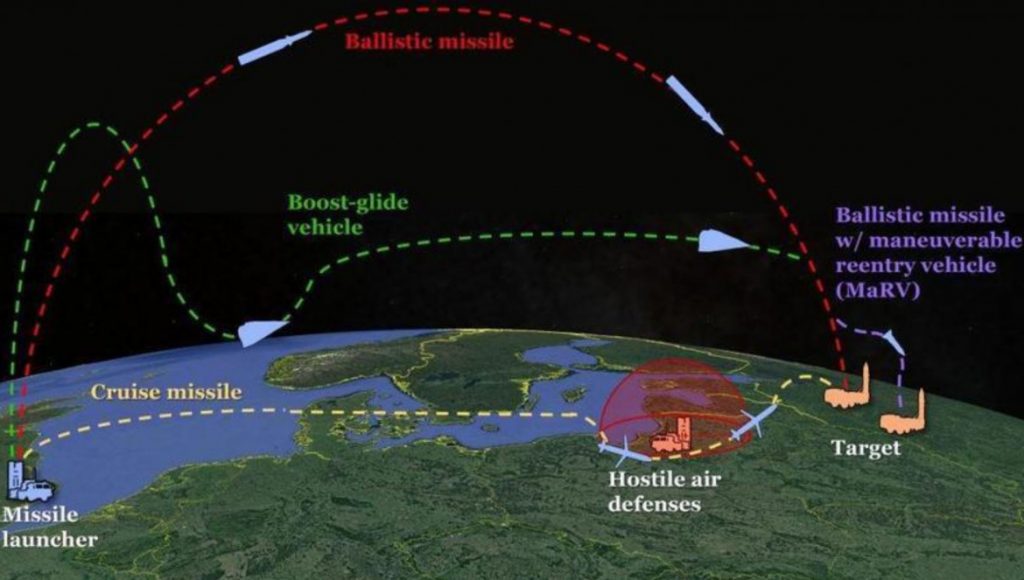 In his speech at the George Washington School of Media and Public Affairs, General McConville revealed that the US Army is preparing a “task force” with “a long-range precision fires capability that can range anywhere from hypersonic missiles to mid-range capability, to precision strike missiles and these systems have the ability to penetrate an Anti-Access Aerial Denial environment”. The General stated that “ We see the future of that being in the Pacific, probably two in the Pacific ” (evidently directed against China); we see one in Europe (evidently directed against Russia); and we’re building them as we speak”.

In an official statement DARPA informed to have commissioned Lockheed Martin to manufacture “a ground-launched intermediate-range hypersonic weapons system”, that is, missiles with a range between 500 and 5500 km belonging to the category that was prohibited by the Treaty on Intermediate Nuclear Forces signed in 1987 by President Gorbachev and President Reagan; the treaty was torn apart by President Trump in 2019. According to the technical specifications provided by DARPA, itt will be “a novel system enabling hypersonic boost glide weapons to rapidly and precisely engage critical, time-sensitive targets while penetrating modern enemy air defenses. The program is developing an advanced booster capable of delivering a variety of payloads at multiple ranges and compatible mobile ground launch platforms that can be rapidly deployed”.

The Army Chief of Staff and the Pentagon Research Agency therefore informed that the United States will soon deploy hypersonic missiles, armed with “ a variety of payloads” (that is, nuclear and conventional warheads), in Europe (there are rumors of a probable first base in Poland or Romania). Intermediate-range nuclear hypersonic missiles installed on “ mobile ground launch platforms “, that is, on special vehicles, could be rapidly deployed in the NATO countries closest to Russia (for example the Baltic Republics). Having already the ability to fly at around 10,000 km/h, the hypersonic missiles will be able to reach Moscow in around 5 minutes.

Russia is also building hypersonic intermediate-range missiles but, by launching them from its own territory, it cannot hit Washington. However, the Russian hypersonic missiles will be able to reach US bases in a few minutes, first of all nuclear ones such as  Ghedi and Aviano bases, and other targets in Europe. Russia, like the United States and other nations, is deploying new inter-continental missiles: the Avangard is a hypersonic vehicle with a range of 11,000 km and armed with multiple nuclear warheads which, after a ballistic trajectory, glides over 6,000 km at speed almost 25,000 km/h. Hypersonic missiles are also being built by China. Since hypersonic missiles are guided by satellite systems, the confrontation is increasingly taking place in space: for this purpose, the US Space Force was created in 2019 by the Trump Administration.

Air and Naval Forces, that have greater mobility, are also equipped with hypersonic weapons. These weapons open a new phase of the nuclear arms race, making the New Start Treaty, just renewed by the US and Russia, largely outdated. This race passes more and more from the quantitative level (number and power of nuclear warheads) to the qualitative level (speed, penetrating capacity and geographical location of the the nuclear delivery vehicles).  In the event of an attack or presumed attack, the response is increasingly entrusted to artificial intelligence, which must decide the nuclear missiles’ launch in a few seconds or fractions of a second. It exponentially increases the possibility of a nuclear war by mistake, a risk that occurred several times during the Cold War. “Doctor Strangelove” will not be a mad general, but a supercomputer gone mad. Lacking the human intelligence to stop this mad rush to catastrophe, the survival instinct should at least be triggered, so far only awakened by Covid-19.