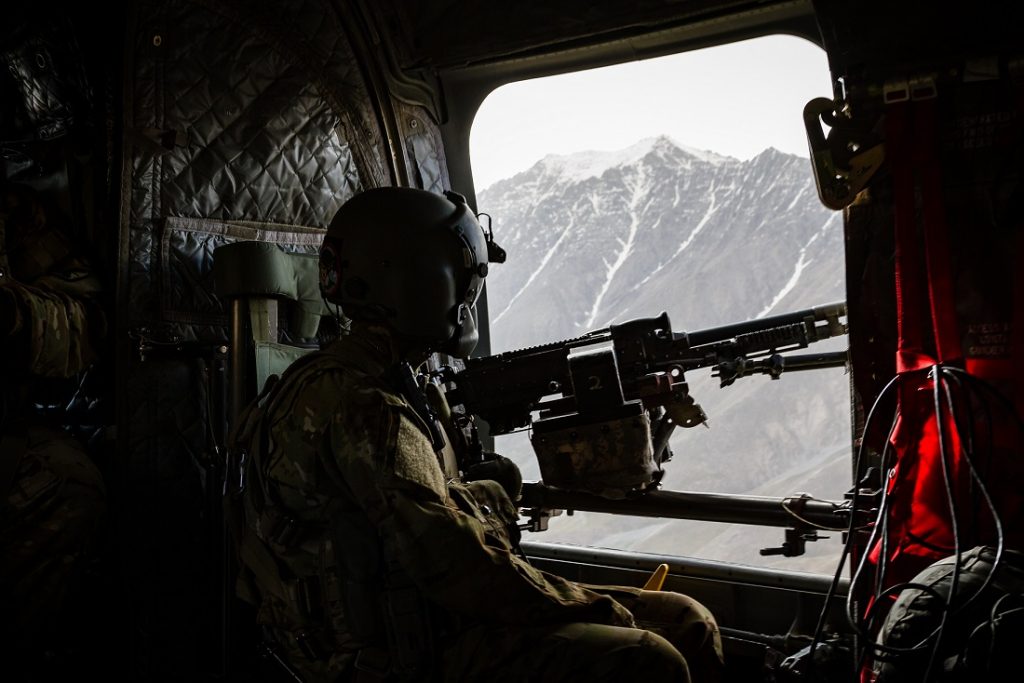 US military helicopters have transported logistics and weapons from Iraq to northeastern Syria, the Syrian Arab News Agency reported on April 10.

“Helicopters of the American occupation forces coming from Iraq transported containers containing logistical materials, weapons, ammunition and medical materials to their base in al-Shaddadi city in the southern countryside of al-Hasakah,” a local source told the state-run news agency.

According to the source, the containers were later moved on a number of trucks to “special depots” in the base amid tight security.

Despite official denial, the US has been boosting its military presence in northeastern Syria since the start of this year without providing any explanation.

An airfield was built in the area of al-Omar oil fields in southeastern Deir Ezzor. A large base is also being built in northeastern al-Hasakah, near the border with Iraq and Turkey. Moreover, recent reports revealed that the US had deployed missile launchers, very possibly air-defense systems, in the region.

That’s why you can’t help but start laughing when seeing news that the US Zioterrorists are “withdrawing” from Iraq. As if the US/EU terrorist Ziocorporate globalists could be kicked out of anywhere by simply asking them nicely.

US Zioterrorists have more freedom to operate in Syria either way, they’ve got a diversity of collaborators in the Turkish/ISIS/SDF invasion areas and are better positioned to destabilise the region with less Iran-backed liberation forces than in Iraq to interfere in US terrorism.

The world in Iraq and other places are not as You wish, even You insist in the most stubern way more blind then Niqabs with sunglasses at night.

You must have lost Your memorycard as well. Nato was asked back and had left by the Bagdads.

You not even respect them … Who shiuld respect You – none.

New batches of terrorists, but they never end?

ISIS breeding camps like Al Hol and at Tanf are designed to guarantee enough head-chopper production for the endless U.S. freedomization scheme demands. You can’t satisfy your best customers if the shelves are empty.

Frankly, the US has given orders to its headchopper terrorists to create more havoc in Syria as it prepares for war against Russia in Ukraine. They want Russia to get bogged down in Syria as the new Afghanistan. The Kurd turds will also attack Russians.

I’ll bet the containers smell like rearmed, retrained ISIS. Hope they left a few air holes. On second thought, I hope they didn’t.

We used to call them barracks. “Special depots” makes it sound like it’s for trans-choppers awaiting for gender reassignment. Could be, though. You know CENTCOM hates to waste those valuable weaponized ISIS wives it choppered out of al Hol. Homicidal psychopathy that profound is an asset to the U.S. Issue them a penis, a paycheck and an AK-47, and they’re good to go for a little anti-Assad head-chopping.

They are ISIS suppliers…weapons, petrol, suits, vehicles…. Nothing new …US bases in Syria are the “Ali Express or Amazon”…for wahabi terrorists brands…

To this day i still amazed how the U.S betrayed their own citizen… soldier tunned into a bunch of criminals aiding terrorists that exterminate their own citizens… (indirectly and kind of directly if we think about they managed the Julian Assange issues) That’s the worst part about the U.S… how can you support a government that wants you dead? Clearly some americans don’t even have a single neuron on their heads… could it be too much fluor on their water? hehe

same in my Country,many people are sleep walking into being part of a Nazi warmongering state,it happened with the Germans and can again,as for north east Syria when are those bastards going to be sent to hell?

Maybee it will be heaven compared to be with someone like You.

Thats not their version at all and ou probatly are several 1000 km from there and translate english into Your own context trying to make a car to a horse.

…And they acually vote and debate about it too.

the usa will never withdraw from the ME, they may draw-down allot in irag only to relocate to syria. the plan all along was to fracture syria, usa and sdf will keep east of the Euphrates, which serves allot of purposes, blocks iran corridor, strangles assad gov and syria by controlling the best oil fields and agri rich soil, while turks get just about what they currently occupy, non may fully get all they want, then there’s the issue of Al tanf and ever more agressive zio attacks

Yes, they just optimize. Trump not there might be a small difference too.

Just Me
Reply to  Frank G

As long as the Zionist cancer survives in Palestine, the deadbeat US losers will keep spending billions to protect the Zionist cowards. However, it is a zero sum game as the dumbass Ameriswine are engaged in wars and terrorism on every continent and have made too many enemies.

I thought they used Zipfiles by internet.

Its also hard to see if any explanantion is needed. To many with low Iq or worse about it. USA has been there for years and still none has learned about them.

Trump wanted to pull out but Biden doesn’t want to do that, he wants to stay close to the Iranians so he can do this,

“The United States has carried out an airstrike against structure belonging to Iranian-backed militia in Syria, U.S. officials tell Reuters.”

“Unidentified aircraft target sites near the Imam Ali base in the city of Albu Kamal.”

“The Imam Ali base and the military crossing, which was also targeted.” …..

And the US will be able to strike at Iranian targets in Iraq just as easily from their more secure bases in Syria, so in essence the US are just relocating personnel out of a less secure area of operations to a more secure area of operations, but they still have all the same capabilities they did before they moved. So it seems old Joes taking a standard defensive stance now, relocating vulnerable hardware/personnel from less secure locations to more secure locations, and also consolidating all the remaining hardware into more secure and defensible facilities/locations. Aren’t they all the things a good commander does just before he opens new hostilities. mmmm, I’m watching you Joe.

Very very biased. Much as part of Your memorycard is infected.

I may be a little biased but my memory is still ok, the warmongering Democrats will just go back to doing business as usual, which usually means unnecessary and destructive wars.

The US neocon regime is setting up the Kurds with their own homeland, and oil is the deciding factor. Lot’s of air defences means a substantial airport.

From this new homeland the USadmin can control not only the Kurds themselves but all the Iraqi’s and Syrian’s within their catchment area. The USadmin also get to cause trouble for Turkey via their new and fully owned fighting force…The Kurds, who think they have a friend in america.

Kurd are not in their own homeland they occupied Assyrian Christian lands after Armenian-Assyrian Genocides in 1915. Kurd get help from Israel and https://uploads.disquscdn.com/images/08f158eb7f3f8e3086318439579f88ebd84396a17de16fc9cdc5c446e8a1ade5.png steal Syrian’s bred basket province.