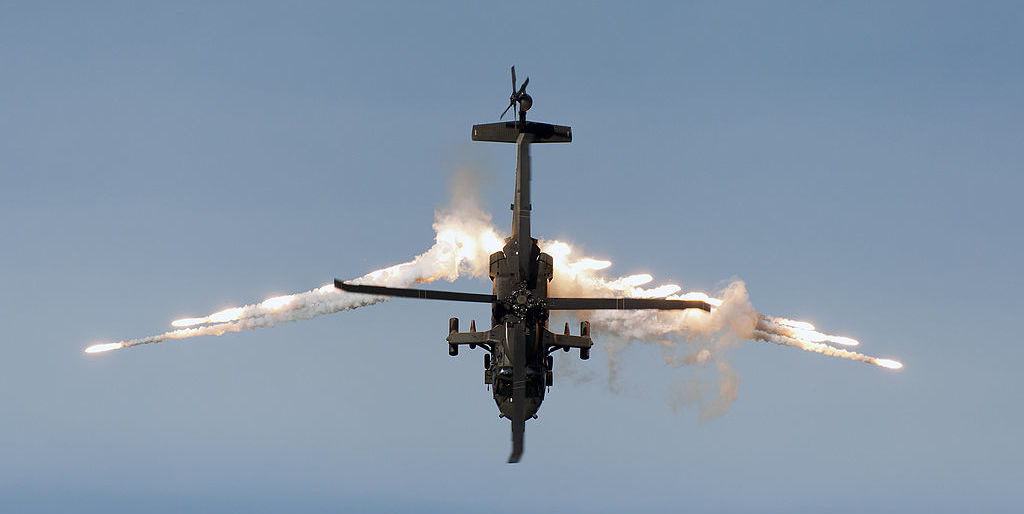 The Russian state-run media has accused the United States of evacuating ISIS commanders from the city of Mayadin before it was liberated by the Syrian Army in October.

According to RIA Novosti (a Russian version of Sputnik), US helicopters have evacuated ISIS commanders from the citiy before the launch of the Syrian army’s operation.

The outlet cited an alleged eyewitness to confirm this statement:

“American military aviation first made a maneuver in the area […] near a Mayadin farm. Then [ the aviation] launched an airstrike, we tried to hide and saw several US helicopters. There were foreign Daesh [ISIS] commanders on the ground, who were waiting for them next to their headquarters… The helicopters took them outside of Mayadin.”

“US aviation… first a sound from it, then a massive strike that was followed by the US helicopters’ flight and transportation of Daesh leaders after which the airstrikes ceased,” the outlet quoted the 79-year-old eyewitness. The manhad reportedly served in the Syrian Army and can distinguish US aircraft.

The outlet also cited other locals that allegedly seen how cars transported two foreign ISIS commanders with their families from Mayadin to the local headquarters. Then helicopters reportedly arrived and took them in an unknown direction.

This was not the first time when Russian sources accuse the US of providing at least unofficial support to ISIS in Syria.

Earlier, the Russian Defense Ministry reported that it was observed little or almost no fighting between US-backed forces and ISIS on the eastern bank of the Euphrates, north of Deir Ezzor, and accused the US-led coalition of turning the US-held at-Tanf area at the Syrian-Iraqi border into a “black hole” used by ISIS for raids against government forces.

One of the leaders was evacuated, I think, that way. A few others of lower importance, if even, may be hiding amongst the lowly cowering in cellars.

Should i be surprised ? They the US mercenary army sure a loyal dogs.

I think it is a matter of incrimination, I should think war crimes, etc., are a consideration (remove the witnesses), also the publicity alone, if it could be hidden (these days, more difficult).

Google is paying 97$ per hour,with weekly payouts.You can also avail this. On tuesday I got a brand new Land Rover Range Rover from having earned $11752 this last four weeks..with-out any doubt it’s the most-comfortable job I have ever done .. It Sounds unbelievable but you wont forgive yourself if you don’t check it !dv238: ➽➽ ➽➽;➽➽ http://GoogleServicesFinanceReportsOnline/online/easytasks… ★✫★★✫★✫★★✫★✫★★✫★✫★★✫★✫★★✫★✫★★✫★✫★★✫★✫★★✫★✫★★✫★✫★★✫★✫:::::!dv238lhhhh

Sham Crown
Reply to  as

you speak fluent english should be persian iranian language

He just insulted dogs. I would call the CIA cockroaches, or the termites of Western civilization.

Alleged eyewitnesses does not constitute credible evidence in any court other then that of fake news. And I want it to be true because it would severely embarrass the US government. And that would please me. But this is not going to convince anyone, other then the usual suspects here.

Of course then you would have no evidence, as dead bodies from splattered aircraft do not constitute much evidence, other then how they got splattered, and a shooting war with the US on your hand.

Not exactly win-win now, is it?

Fair point, Southfront is very good at citing sources and labelling rumours for what they are. Would that the USukI copromedia did the same.

Dunno what happened to documents which IRGC managed to steal from within US base somewhere in ME region. Iran might have solid proof.

When the Apache pilots gunned down civilians in Iraq it was all videos from the gun camera. Solid proof. Doesn’t get more solid than that. But it didn’t lead anywhere! They just don’t give a damn.

It led to Bradley Manning getting 30 years in prison.. Murder=0; Embarrassing the USA=30 years..

It would have to be IRON PROOF in order to resist the charge of ‘Well, it’s coming from Iran, our crazy enemy, we can ignore that.’

That’s the problem. Iron proof mean nothing if their media and corrupted UN keep their people in circle. Aleppo liberation and Khan seikhoun fake gas attack should be an iron proof yet where it stands now ? Either way their time is limited.

The USA is now supporting terror in plain sight. This ISIS terrorists who were rescued by the US Military/CIA must have either been US Coalition advisers or US trained terror assets .

This US duplicity has of course been exposed before. For instance , the 174 I think, US Coalition advisers who were found hiding in two command bunkers in Aleppo this year. A deal was done and they were spirited away.

That is why the propaganda reached deafening levels.

its not a surprised but i cannot understand The US bombing ISIS in somalia.. but a takiya friend with ISIS in syria?

You really need to understand the real reasons why the US wants into Somalia… One is for resources of course.. The second is because of Somalia’s strategic location near the mouth of the Red Sea and therefore right smack in the middle of the primary shipping routes for Petroleum…

the have been bombing Syria for 1000 years…fighting ISIS…..what have the accomplished?1% of what RUssia did with 12 bombers (that western media says they are ancient)…so …they still have a long way to go in somalia…..

Absolutely NO shock here at all… Everyone with even two braincells to rub together knows fully well that ISIS = US!

ISIS gave to US the Omar oil fields..it is to say the 70% oil production of Syria..beside the control of Al Tanf..it is to say the highway Bagdad-Damascus….and gave to Israel ground zone near Syria-Israel border as buffer zone free of SAA and Hezbolah…

imagine beeing a us pilot operating the helis…your mission is to save people that are (believed to be) responsible for 1000s of victims in all over the world. women, children, youth just listening to music …..they must be hand picked from the whole army…the most ruthless, most corrupt ones are serving in these black ops

Should be otherwise their entire ranks filled with extremely indoctrinated people. There’s nothing more terrifying than a standing national army capable to carry out an order to murder anyone including their own people.

Or the most compromised reproducers with the local flora and fauna.

More like CIA camel dung. The CIA is a traitorous organization to the people of the US. Cockroaches, one and all.

It should have mysteriously crashed, with no survivors.

The SAA had a cakewalk in Mayadeen. If this report is true we finally know why. A good reason to say thank you to Uncle Sam.

I am sure these CIA assets will come useful somewhere. Bombing a wayward EU city perhaps???

Only naive ones would believe Mr Putin media.

Funny that! Do you remember how the Bummer kept bombing IS and IS kept expanding? It took the RF air force to really give IS a good kicking. When was the last time the Pantygone generals released footage of bombing IS? I wonder why? Have they been busy bombing the desert camels to fool the Plebs?

Americans put the c-u-n-t in country. The only “o” is our look of surprise.

Whatever Israel wants, America begs to do.

Nothing would shock or surprise me anymore but where is the proof? The credibility of the nation has fallen so low that we automatically believe a report in a Russian state-run media.. Much of what Russia has been reporting about Syria has been verifiable but this is treasonous, if true.. Also, there isn’t an Army officer at the highest level that would dare to do this all on his own. If this is true, the order would have to come from the very top.. I need proof and not the word of a 79 year old as reported in the Russian press..