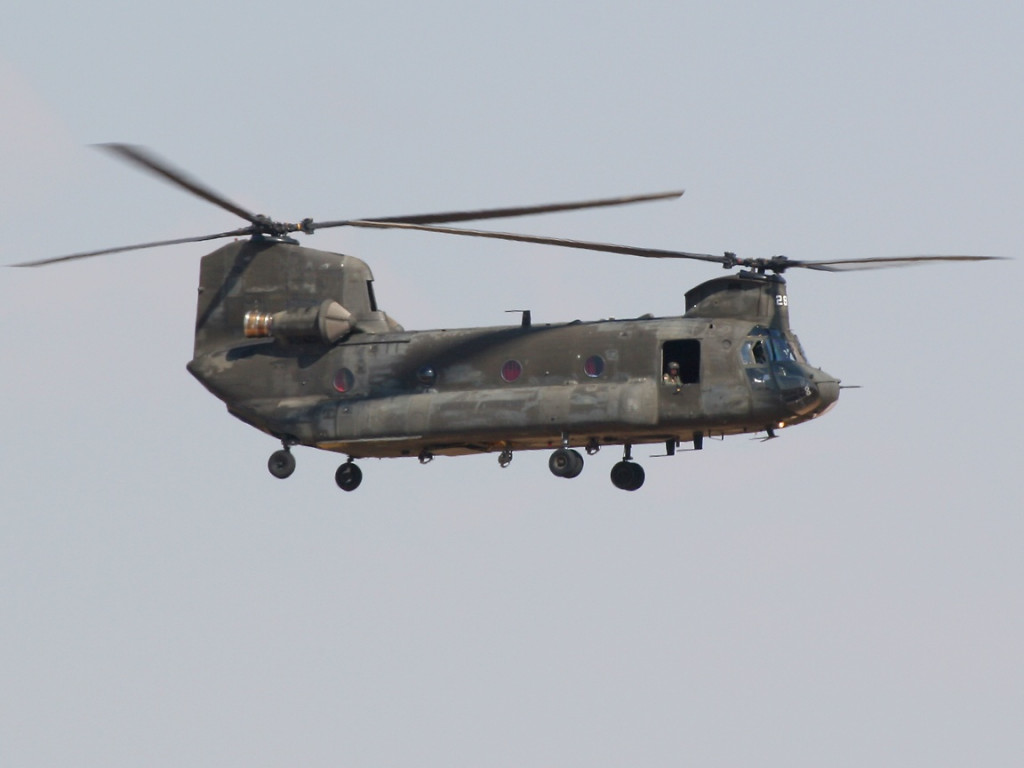 A US Boeing CH-47 Chinook helicopter landed near the village of Mak’houl in al-Jazeereh region controlled by ISIS terrorists on January 28, according to various pro-Iraqi and pro-Syrian sources.

Initially, the information appeared in English in the Iranian Fars News Agency which quoted a member of the Iraqi Parliament, Sattar al-Qanem. Then it was spread across various pro-government media outlets and blogs.

Sattar al-Qanem quoted sources in the Iraqi army intelligence and the country’s popular forces of Hashd al-Sha’abi as saying that an American Chinook helicopter on Saturday landed in al-Jazeereh region near Salahuddin that is controlled by the ISIL terrorists.

In the meantime, another American aircraft landed in an ISIL—held region near the village of Mak’houl North of Salahuddin.

Member of Security Commission of the Iraqi Parliament Hassan Salem said that the US army aircraft was carrying food stuff and arms for the ISIL terrorists in al-Jazeereh region near the village of al-Salam and was on a mission to take some of the ISIL commanders and members away from the region.

“We will not keep mum over the landing of US military aircraft in ISIL-held regions,” Salem underlined.

The agency added, citing Al-Waqt news website, that last October two military helicopters of the US-led coalition delivered number of weapons and military equipment to ISIS members in the Iraqi province of Diyala.

No photos or videos, confirmed aforementioned claims, have been provided.

as expected. US and Israel support and provide weapons on both sides. the objective is depopulate Iraq and Syria by all means including killing each other as necessary steps for the zionist Greater Israel vision,

The Fing News
Reply to  me notyou

Do you even live in this planet? This should not come as a surprise at all! The so called ‘rebels’ which US has been helping has been dubunked time and time again that they are terrorists! How about when US government admitted they air striked SAA near Deir ez-Zor killing 80 of SAA soldiers, wouding 100+ which resulted in ISIS taking control of that area which led to Deir ez-Zor mess? After the investigation finished of the so called ‘accident’ it was beyond a doubt that it wasn’t a mistake but rather a calculated move. Go back to CNN moron!

me notyou
Reply to  The Fing News

You mean go back to fox, don’t you, retard?

Kell
Reply to  me notyou

Kell
Reply to  me notyou

This has happened many times and documented by lugenpresse (main stream media) The Egyptian media was saying when I was over there that the Jordanian pilot that was shot down and captured by ISIS was actually shot down by a US aircraft because he attacked an unidentified aircraft dropping supplies to ISIS which turned out to be US/British.. https://www.youtube.com/watch?v=gJlF7usHNss

CIA and ISIS in cahoots is really not a big surprise…..CIA supporting several sides in these conflicts…..assisting the SDF, the Kurds, Al Nusra, ISIS and Iraqi Army

Strange, I saw a Chinook land by our county jail last friday. A bunch of inmates jumped on board and it just took off! It may have been Con Air. Sorry no pictures, my cell phone battery was dead. But it was painted in camouflage olive drab, does that help?

Careful, Ivan, Fearless Leader Valdamir is going to do a Mikhailov number on you if you don’t change your tune soon. His boy, Donald, is eventually going to express dismay at your nonsense, and current SF staff might be sacrificed. Look up “scapegoat.” It’s all about timing, and you’re a tad behind.

Dear friends, here you can see another example of a person who believes that SouthFront was set up by the Kremlin and Trump was elected by mighty Russian hackers.

Bringing supplies to their (USA-OTAN-Israel) creation, it is not at all a surprise for any intelligent person !

Why am I not surprised by the comments by trolls here?

They do not want people to see the obvious truth that the US IS in fact ISIS and always has been! Their glaring support for their paid mercenaries and operatives are once again clearly evident with these actions!

Am reminded of the Colonial wars for North America.. The Spanish Kings went bankrupt to Jewish money lenders, All the loot of the New World. ……Spain falls. France and England now fight for control. The Vatican fails via Frances Navy….they can only hold little.

ISIS and the Muslim Brotherhood…. ..are Fascism of Islam. Fascism is Rome…. All the socio tensions and wars are ….Submission to Papal Temporal Power.

The Russian Generals which support Putin understand what the end game is. The Ukraine is a criminal Nazi enterprise which the Vatican supports. It’s not just US military industrial complex and crazed Zionist

Europe is a rickety bridge….and still the NATO /Vatican game pushes against Russia, And now with Trump. …pushes on China.

Wheres the jews in all this? Seems Rothschild interests almost make the Vatican irrelivent or at best a subsidiary to them. https://uploads.disquscdn.com/images/befba93d45e3c4f9ff3b1b01c5bce006eeaa567b3ef84932c8da0a4eaa52fa65.jpg

Hi Kell Battle of Waterloo and Rothschild intrigues. As mentioned in previous post….Spanish Kings went bankrupt. ..even upon all the looted Gold of the New World. Venetian Bankers backed Europa…backed Silk Road trade. ..even backed the Mongols.

They eventually pissed everyone off. …even the Pope went after them. Ran them off to Holland….they jumped the Channel to London ( City of London ) And by late 1800s …..Wallstreet NY State.

Rumor is the Venetian Bankers were generations of Oligarchy which left Ancient Babylon. Not exactly Jews…..but Jews eventually scheme into the power circle.

The Church of Rome has known about the diameter of the Earth. Hence why when Masonic ( Cristobal Colon ) Columbus….went to the New World. The Vatican already knew Trans Atlantic trade was occurring. The Templar/ Masons in the New World on secretive action. The Pope uses Papal Bull to claim all Lands Discovered for the Church. The Portuguese screw the Pope in their South American/Brazil concessions.

Raiding Spanish Shipping… Sugar/Fruit and Spice Trade. ..plus Rumm….= Papal power being cut out by Independents. …The Masons and the Pirate Flag signal contest.

Rome lost America as the Navy of France could not support its Colonial Reach… Britannia won….and so to….the Masonic houses. It would be 100 years and into WW 2….before the Jesuit/Papacy could control America. The OSS/CIA….Ratline Nazi and NASA Rocketry signaled they had succeeded. The US Neocons may appear to be in charge,….they are not. Temporal Power …..continues.

Indeed I do not fall into the trap “their all jews” as this is very obvious so obvious clearly someone has intended for it to be this way so that they take the brunt of the inevitable counter-reaction.

I dont however absolve them of their crimes as many like to do and ill point out a few things now the above is known.

* Jesuits are an order of jewish convert or jews useful for whatever reason.

* Masonic orders are known as Hebrew Brotherhoods for a reason and allegedly their linage does go back to Babylon and indeed before to Atlantis and the two feuding brotherhoods that destroyed the place the other of which allegedly is the Thule society in Germany that has been sitting very quietly since the 1940s.

* Christopher Columbus was a jew.

Indeed you point out some very interesting aspects of history some of which I was myself light on in particular the relation of (((money lenders))) to the Spanish crown – my ancestors who were from Ireland and Scotland wound up ethnically cleansed and sent to Australia by invading Dutch armies funded by jews (Highland clearances/Irish famine) so have a personal connection with all this as well to the wars they continually create for their own personal profit.

If you think the Black Nobility or ‘others” behind the scenes are not jewish I wonder who you speculate they really are?

Upon learning that Jewish money lenders …Bankrupted Spains Kings. It was obvious the Rothschilds house would be a snake of earlier creation. The Rothschilds had Shield/Crest is numerous Europe nations. The Waterloo play and run the tables at London trade house indicates they have At least….on par…Intelligence agents as the Jesuit /Vatican.

The Masonic hold of 1776 America was tumbled during WW 2.

LOL….Donald Trump is educated at Fordham. …this is Jesuit. His Children are UPenn. ..connected to Georgetown. Bill Clinton went to Georgetown. ….And was Rhodes Scholarship.

The Neocons and Zionist are real….their Thinktanks push the US Military. Americans are complete sheeple…Even Europeans…they luv the kool-aid.

Panzer Pope at the Whitehouse. …Notice the British soldiers. …playing music for the Pope.

America honors it’s ruler. Notice the Papal flag going up the Stairs of the Whitehouse. http://assets.nydailynews.com/polopoly_fs/1.283232.1314352906!/img/httpImage/image.jpg_gen/derivatives/article_750/alg-pope-white-house-jpg.jpg

George C Scott in the movie ….Patton, Is walking his dog with a Windmill behind. (Don Quixote )….

And then he is killed….

If you think the Black Nobility or ‘others” behind the scenes are not jewish I wonder who you speculate they really are?

The Jews….are actually a small clan from circa Akkad/Sumer…in the Hurrian Culture. Along trade routes they prospered. Trade from India was in Sumerian ports…and overland Trade routes.

The Jews were never taken in slavery to Egypt. There is NO official gov record from Assyria, Babylon,Egypt…of either King David…or Solomon. Their Kingdoms and territory trsde/wealth are complete make believe… They never Existed. … The Hebrews/Jews concocted a history during the Babylon captivity.

The Hebrews /Jews are simply opportunist that seize the moment, Steal knowledge. ….use leverage against others.

The Greeks kicked the shit outta them,…and so to the Romans. This happens when you offend Ruler power.

The Hebrews followed after numerous pagan gods. …like Molech. They cast a literature legacy of following YHWY, …when that to,…is complete BS.

They are opportunists….and some % hooked up to serve Oligarchy/Kings, Building a support base of Nepotism. ..

House of Saudi are fake Muslims. … Jews are just as fake….

Certain elements (the loosing side Neo-Cohens) in the US administration cleaning up and obscuring evidence trails, pulling key poeople out before ISIS are rolled by Iraq/Syria/Russia and Trump, attacks on Al-Nusra recently by US aircraft seem to be doing the same thing.