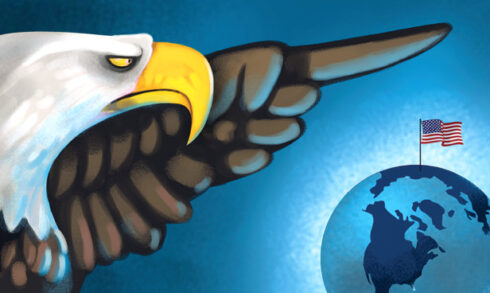 Washington is overburdened by overextending its power and trying to contain Russia and China simultaniously.

Ravi Agrawal, Foreign Policy editor in chief, has interviewed historian Stephen Wertheim,  a senior fellow in the American Statecraft Program at the Carnegie Endowment for International Peace. In this interview, Wertheim argues that the US is overextending its power and therefore should restrain itself in Taiwan and Ukraine, among other places.

Washington has of course been providing essential support to Kiev in its current conflict with Moscow. Meanwhile, it is engaged in a new cold war with Beijing.

The American scholar notes that, even though US President Joe Biden came into office proclaiming that “America is back” (after years of former President Donal Trump’s relative “isolationism”, if you may call it that, though only relatively), the current American president in fact withdrew from Afghanistan and seemed to reject the idea of a “forever war” there. Moreover, he also initially pursued a “stable and predictable relationship” with Moscow.

One should say it did not last much, though. Not too long after removing its troops from Afghanistan, Biden escalated the American forever war in Somalia, for example. And, one year after that withdrawal, the US now finds itself entrenched in two arenas simultaneously, while it tries to encircle and contain two superpowers at once.

An interesting point Stephen Wertheim makes is that by pushing the narrative that the conflict in Ukraine is all about “a defense of democracy”, albeit Ukraine could hardly be described as a democratic country from a Western or anyone’s perspective, the US and its global North allies in fact alienate and exclude much of the global south. The US “human rights” and “democracy” narrative that informs much of its foreign policy, in any case, is simply a weaponization of these very concepts, as anyone can easily tell just by paying any attention to the covering up of Ukraine’s own record on this, for instance.

Wertheim also argues that the American “engagement” strategy was really about regime change, in an attempt to make China look like a liberal democracy Western country. This has been replaced today by a “containment” strategy, but the truth is that neither approach has worked. What he proposes is a “mutual coexistence”, based on the premise that Beijing has “its own system” (albeit one which the US does not approve of). In this scenario, for the sake of avoiding the serious risks of a “great-power war” Washington would not try to “change the Chinese regime” and would acknowledge that “not all aspects of Chinese power run counter to U.S. interests in the world” – plus “some things are also not worth antagonizing China over.”

Thus, Stephen Wertheim reasons that the White House should go back to its own One China Policy, as it had been practiced for decades, though still maintaining some degree of “strategic ambiguity” on Taiwan, so as not to provoke and corner the Chinese into thinking they will need to act there. The academic goes beyond that and, in practice, argues that Washington “doesn’t have vital interests implicated in the Middle East” and therefore should “draw down” its security partnerships there. In the same way, it should pursue a “transition” in Europe so that Europeans themselves lead the defense of their own continent.

Wertheim’s defense of “restraint” (or so-called “offshore balancing”) echoes that of Stephen M. Walt, a Harvard University professor of international relations, who adopts a realist stance on foreign policy. Walt has been defending that there is not much need for the US to deploy significant forces neither in Europe nor in the Middle East, and that a more restrained foreign policy would free up resources for much needed long-term domestic investments in the nation’s future. Walt argues that realists were correct about the dangers of NATO enlargement, the Iraq war, about Afghanistan, and so on. Thus, they should be heard.

In a similar “pro-restraint” vein, former U.S. Secretary of State Henry Kissinger has been urging peace talks with Russia, necessarily involving some territorial compromise in Ukraine, so as to avoid a permanent break with Moscow. Realist scholar John J. Mearsheimer in turn has also warned that the US-led Western policy toward Ukraine would lead to trouble, as have many other realists.

These calls for restraint are not only feasible but are in fact quite urgent. Europe already seems to be slowly “abandoning” Ukraine, which, from the US perspective, overburdens Washington. The US is already overextending its power in its effort to contain two superpowers at once. If one stretches too far, one breaks, as the saying goes. It is about time Washington exercises some restraint – in Taiwan, Ukraine and beyond.

“Containment” has simply not worked and the unipolar moment has already passed – whether the American establishment likes it or not. Therefore, the United States needs to get out of the escalatory dynamic it has put itself into, for the sake of global peace; and it must surrender much of its military overcommitment.

No one is gonna tell America to exercise restrain, no one! We exercise when, how and where we wanna exercise and we do not do it in restrain!!! Period!

i am confused
Reply to  Tommy Jensen

so a sign says “slow down” and you speed up ….. right off a cliff

Last edited 5 months ago by i am confused
14
Reply

Ashok Varma
Reply to  i am confused

US is quite irrelevant in the new Asia centeric power balance, even Solomon Islands gave the US navy the finger and refused refueling. Same is happening in Sri Lanka. People are fed up with US racist arrogance.

Once Upon a Time
Reply to  Johnw

A shining light on a hill that seems to be good only at attracting mosquitoes and blinding itself to its own realities.

He said, “we” you sound like a socialist, or I should say a commie.

Also, read first before talking out of your asshole again. It doesn’t matter to Russia or China really… The USA like their masters Zionist don’t like to fight their own wars, the US is failure – they are buying slaves in UA to fight Russia, and Taiwan going to see that same future.

If you do a job halfassly you going to get fired, that is the USA as of right now. Iraq, Syria, and Afghanistan were all failures of the USA – the USA failed to achieve its goals. None of those countries had a powerful military. Afghanistan alone cost the USA 2.1T dollars – what you achieve again? Tell me.

You become known as killers but the world knows that, and the world saw how bad the USA is overall. You had 20 years and run away from “backway people with AK-47” and asked him to protect YOU.

Now if the USA restrains itself from invading Afghanistan – would the world see the USA as a failure or a country full of mad pigs? No. It is the same story as before. UA is going to lose and so is Taiwan.

Why the U.S.LGBT military faces a growing recruiting crisis?

Well alright then. Get ready for the soup kitchens and have your begging bowl handy.

The true bosses are the bankers who “borrowed” the USA trillions of dollars to build its military.

They’re being laughed at these days. It’s not working anymore.

The West doesn’t look militarily over burdened to me. They aren’t losing their flag ships, bridges, military airports, and ammo depots. They have huge self imposed social and demographic problems but their military for all its flaws is far more functional and capable of solving tasks then anything displayed by post Soviet oligarch Russia.

Proof is in the pudding.

Yes indeed it is.

But I see lots… and lots…. of dead Western mercs making grade A potting soil these last 6 months to show for it.

And unending economic strife and panic in those Western markets that has already launched a civil war in the “Beacon on the Hill” that made it possible.

Once Upon a Time
Reply to  Vanya

Proof’s in the ocean size puddle of melted flesh……I suggest you not push your luck or mine.

I’d hate to see civilization ended by a cadre of NATO maroons clinging on to their paychecks.

Russian columns in bridges are the pudding 😘

Once Upon a Time...there was a civilization
Reply to  Putin bitches tears taste like heaven

You sound like a German grunt singing the songs of Dunkirk while being overrun in his Berlin bunker in 1945.

And for what it’s worth… I want to see Russia, China, India and Iran turn them into radioactive dust, but that means everyone else will suffer and die at their hands for the maniacal lunatics that just 25 years ago would have seen them behind bars for the relentless war crimes Truss & Co. as well as Biden LLC, have committed!… Or at the very least lobotomies and a padded cell!?…

Expecting restraint from a pathological Zionist occupied USA, is like expecting an autustic child to behave itself on an empty stomach!

The crazy bastards are biting off more than they can chew , no doubt about that. Look at the results of their foreign policy , it’s a fucking disaster. The geniuses have hurt themselves and the Europeans , far more than they have the Russians.

Is that opinion or manipulation? Fact is the battle in Ukraine is lost, time to retreat. Belligerent sides are not even clear, China is ambigues.

“RESTRAINT IS A PATH TAKEN ONLY BY THE 🦉 WISE!;AMERICA IS 🚫 NOT ABSOLUTELY NOT WISE!. THEREFORE IT IS DOOMED!!.The US, Has Already Chosen it’s Particular-Path-to-Collective/National Suicide taking it’s Twin Sister in Infamy Britain And Most-Of-Equally-Spineless-Gutless European’s along With Them!!. That’s Reality as it “IS!”,The Only Thing left to See is How The Final Act in They’re End Of Day’s Comes Wether in Fiery-Thermonuclear-Global-Holocaust,Or Massive Economic-Political Implosions,And CivilWar’s,Or A Combination Of Both!!.NO MATTER WHAT, THEY’RE DONE AND SO IS THEY’RE NEO-CONS-LIBERAL LUNATIC’S GLOBAL IMPERIALIST STRATAEGY,THE MULTIPOLAR BRIC’S-WORLD WITH,RED-CHINA,RFR-EURASIAN CSTO SHENGHEN NEO-AXIS TREATY-PACT ALLIANCE, INDIAN FEDERATION, AFRICAN UNION,AND SOUTH AMERICA CO-EQUALLY-SHARING THE STAGE!!.