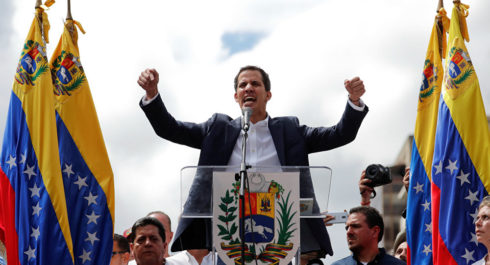 The US announced Monday that it was introducing sanctions on Venezuela’s state-owned oil giant PDVSA just a week after recognising the head of the opposition-controlled National Assembly, Juan Guaido, as the South American country’s interim president.

Washington has certified the authority of Venezuelan opposition figure Juan Guaido to control some assets held by the Federal Reserve Bank of New York or any other US-insured banks, the State Department announced on Tuesday.

“On 25 January, Secretary of State Michael R. Pompeo certified the authority of Venezuela’s interim President Juan Guaido to receive and control certain property in accounts of the Government of Venezuela or Central Bank of Venezuela held by the Federal Reserve Bank of New York or any other US insured banks, in accordance with Section 25B of the Federal Reserve Act. […] This certification will help Venezuela’s legitimate government safeguard those assets for the benefit of the Venezuelan people”, State Department spokesman Roberto Palladino said in a statement.

On Monday, US National Security Adviser John Bolton and Treasury Secretary Steven Mnuchin held a press conference to announce that the US had blocked all assets of Venezuela’s state-run oil company PDVSA under its jurisdiction and banned deals with the firm.

Mnuchin, however, stressed that US companies would be allowed to go on purchasing Venezuelan oil, but the payments must be held in an account that cannot be accessed by the government of Nicolas Maduro.

“If the people in Venezuela want to continue to sell us oil, as long as that money goes into blocked accounts, we’ll continue to take it. Otherwise we will not be buying it”.

The legitimately elected Maduro has dismissed the sanctions as illegal, while PDVSA President and Oil Minister Manuel Quevedo slammed the restrictions as “a robbery” that is being accomplished with the help of the “treacherous action of the Venezuelan opposition”.

The situation in the Latin American country escalated after Guaido declared himself Venezuela’s interim president last week in a move swiftly recognised by the Trump administration.Washington has been calling on the international community to follow suit, and urging Maduro to step aside in favour of a “legitimate leader reflecting the will of the Venezuelan people”. Maduro, in turn, has accused Guaido of being a “puppet” and blasted the United States for orchestrating a coup.

Guaido has been recognised as Venezuela’s interim president by the US, Canada, Israel, Georgia, Albania and a handful of Latin American countries, including Colombia, Chile, Peru, Brazil, Guatemala, Costa Rica, Panama, Paraguay, Honduras, Argentina, etc. A number of European countries have signalled their intention to follow suit.

On the other hand, Russia, Turkey, China, Iran, Bolivia, El Salvador, Cuba, and Nicaragua are strongly supporting Maduro as the only legitimate head of state.

Looks like the US has cut itself off from Venezuela oil. That should boost its price.

Maybe that was the plan all along?

Exactly, American oil companies need more than 65 bucks to break even. As the global economy slows the world needs less oil, so the US attacks oil producers in other countries to try and raise the oil price.

So they and the bank of london literally stole billions in venezuelan taxpayers money.

Turns out that Colombia is NOT a NATO member state and not covered under Article 5. It’s only a global partner, which means various kinds of cooperation with NATO but without the status of full membership. There were many MSM stories claiming Colombia had joined NATO, but that was technically not true. ‘Join’ implied full membership, but that was deceiving – it was only the partnership thing.

In the good old days it took millions of US taxpayers money to organize a successful coup in some God forsaken banana republic that somehow offended the great Gringo Heffe north of the Rio grande. But now, thanks to ingenuity of international bankers, complete disregards for the rule of law and creative use of sanctions poor little brown men pay for their own occupation. What interesting times we live in…

The exact same thing they did against Libya and Iran and basically any other country that dared to show some aspiration towards independence.

And Venezuela has frozen the US’s best boy’s bank accounts.

I personally am sick of these soft power chess games. Let’s use hard power this time.

And that’s why you aren’t in charge – because in mid 2000’s Venezuela bought new Russian hardware – Su-30 multi-role fighter jets and batteries of S-300 SAM systems.

the nearest lamppost for the traitor, now! will be fun to watch on the tellie one of these nights.