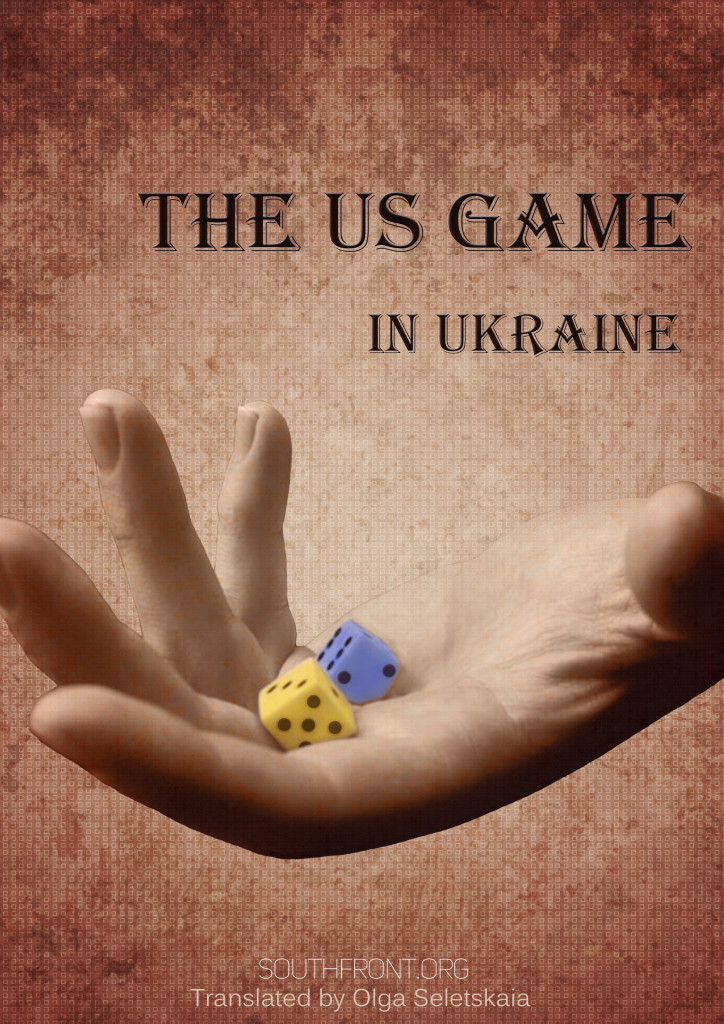 This article originally appeared at Inosmi, translated from Russian by Olga Seletskaia exclusively for SouthFront

Historical events quickly pass by: what yesterday was in the centre of the world’s attention is no longer of interest today. Against the background of the events reshuffles in the Middle East, the emerging of the Islamic State and the mass migration to Europe, Ukraine is quietly agonizing. Metaphorical fronts are getting rigid, and with cautious reference to the Minsk agreement, the parties are now playing the “peepers”, and periodically are firing at each other. …

For impartial observers it is now clear that the United States profits from the destabilization of Ukraine and from maintaining a lasting conflict. Those who shape political views in the Euro-Atlantic zone call Russia “aggressor”, for the sake of which they completely distorted everything that happened on the Maidan. In this regard, Ukraine has become a victim, and American-supplied puppet government has become a representative of “European interest”. As we know from Victoria Nuland’s statements, it costs US $5 billion to bring to power in Kiev pro-American puppets. John McCain who called Viktor Orban “neo-fascist” was pursuing the same goals when he was visiting the Maidan.

American Republican senator and his supporters are not worried that they provide support to the Ukrainian Nazis who openly despise Jews and everybody around and who even got seats in the Ukrainian Rada after the elections. But who cares: the end justifies the means, and the winners are not judged. Similarly, in April 2013, John McCain illegally visited Syria, where he met with members of the opposition to Bashar Al-Assad “moderate coalition”, including Ibrahim Al-Badri. Abu Bakr al-Baghdadi is now the world-known caliph of the Islamic State. At the time of the meeting, Al-Baghdadi had already been for many years in the list of most wanted terrorists in the world. In Ukraine, Petro Poroshenko is the president now. According to WikiLeaks, the Americans called him the “disgraceful oligarchy” in 2006. In addition, Poroshenko, being then a regular informer, actively snitched to the US Embassy in Kiev about Yulia Tymoshenko and Aleksandr Turchinov so that they would be quickly imprisoned. Yulia Tymoshenko lost the worst by mistakenly having rushed to Maidan from prison; she was booed there and had to leave. Victor Klitschko, present Mayor of Kiev who refused the deputy chair in Rada, also vanished from the “big politics”.

Europeans can learn a lot from the Ukrainian “story of betrayal.” Not long ago, Petro Poroshenko has dismissed the head of the Dnipropetrovsk region Igor Kolomoisky, who sponsored the armed units fighting against separatists in Eastern Ukraine. Poroshenko made such a decision about his ex-ally because Kolomoisky and his armed men broke in the Kiev headquarters of state-owned enterprise “Ukrtransnafta”, where the day before its director, “Kolomoysky’s man”, was fired. Caught in a difficult dilemma, Poroshenko went ahead with the break-up, having lost thus one of his most influential supporters. The story was not over. After the conflict between Poroshenko and Kolomoysky over “Ukrtransnafta”, Kolomoisky’s “Privatbank”, one of the largest financial institutions in Ukraine with 26% of deposits and 50% of bank cards in the country, closed all the accounts of the Poroshenko family.

Days later, Head of Emergency Department Sergei Bochkovsky and his deputy were arrested and handcuffed right in the government boardroom. This spectacular event was televised live. Both were accused of embezzlement in the implementation of public procurement. After that, on the last day of May, Poroshenko appointed Mikhail Saakashvili Head of the Odessa region. Michael Saakashbili holds American, Georgian and Dutch citizenships.

Michael Saakashvili was a President of Georgia in 2004 – 2013, and currently he is wanted in Georgia for his activities as Head of State, and his property is seized. After his appointment, he said: “Our main task is to leave behind the conflicts that have been artificially imposed upon this wonderful country.” Head of the Ukrainian Radical Party Oleg Lyashko called the appointment of the former president of Georgia who recently acquired Ukrainian citizenship, “an insult to the Ukrainian people.”
Viktor Baloha, the most influential politician in Transcarpathia, the head of the party “United Center”, wrote on his official Facebook page that Russia, the United States and the European Union have already decided on the division of Ukraine without the consent of Kiev. The change in the Western position towards the Kiev regime shows in increasing recognition that the ceasefire agreement violations come from both sides, not only from the the militia’s part. Famous for their cruelty, Ukrainian volunteers are charged with banditry, murder and looting. The Chief Prosecutor of Ukraine initiated the arrest of the former head of the battalion “Aydar”. However, the division “Aydar”, like the “Right Sector”, do not intend to abandon their commanders. Members of the “Right Sector” in Mukachevo got involved in an armed confrontation with Michael Lano, who, despite his criminal past, is a member of a democratic parliament in Kiev. One of the “Maidan heroes,” the head of the “Right Sector” Dmitry Yarosh is also a parliamentary representative. From April 2015 he also assumed a position of adviser to the defense minister. According to experts, it is not possible to assess the amount of weapons in the hands of individuals and groups outside the front line. The majority of Ukrainians do not want to die for Novorossia, so the Ukrainian parliament authorized the involvement of foreign mercenaries. It is increasingly clear that the weakened Poroshenko is not interested in meaningful negotiations with the militias, which the West calls the terrorists, while the Ukrainian government only partially pays pensions and other social benefits to residents of eastern Ukraine.

Ukraine is desperately approaching its collapse. Though it is about to sign the agreement on association and free trade with the EU, this will not solve anything. Viktor Yanukovych, who did not sign the association agreement, because he was supposed to get $15 billion credit from Russia, was driven away. Now there is neither one, nor the other. Now Ukraine is deprived not only of Russia’s financial support, but also of the vital Russian market. Moscow can wait: economic hardship and hopeless confrontation with pro-Russian militias in the east of Ukraine, sooner or later will lead to a total collapse. The pro-Western Ukrainian oligarchs, most likely, only then will realize that their patrons do not intend to bear their losses. Then forces gravitating toward Moscow will come back. The position of those “European Democrats” brought to power by the coup is also being exacerbated by the rapid deterioration of relations between Kiev and Warsaw. It started when Poroshenko signed a legal act rehabilitating the pro-Hitler Ukrainian Insurgent Army (UIA units massacred an entire Polish settlement in Eastern Galicia in 1943-1944.). Are they the same Polish politicians who opposed the legitimately elected former President Viktor Yanukovych that are opposing Poroshenko now?

In March 2014 Polish intelligentsia condemned Russian aggression. In their letter that depicts the harsh reality, it says: “This is the first time in history – the citizens of one country hold the European flag, and at the same time they are being shot.” But they did not think about what was written on the other side of that banner: “On the holy Ukrainian land there is no place for the Russian, Poles and Jews.” The Polish intelligentsia must have been probably confused – maybe, these banners were sewn in Washington and Brussels. Some people never learn from history, but Andrzej Duda is not one of them. The current president of Poland, trying to satisfy Polish society, sees the main enemy not only in Russian, but also in Kiev Ukrainian chauvinism.

The European Union has punished itself by the introduction of sanctions against the Russian Federation, while trade between the US and Russia increased by 10%. Former German Chancellor Helmut Kohl said that to isolate Russia over Ukraine is a big mistake. According to the newspaper Der Spiegel, when it comes to the US economy, “the Western superpower takes a break in a new cold war, which it is leading with Russia.” For example, the American aircraft manufacturer Boeing” bought from the Russian titanium production company “Avisma” 40 % of the necessary materials for the running gears and hydraulic devices. 1200 engineers in Moscow are working for the research center; in January the US Orbital Science has concluded with the Russian “Energomash” a contract worth one billion dollars to purchase 60 drivers for the US launch vehicles such as Antares. The modest abilities of President Poroshenko show that he is not interested in the international situation, changed by the game of great powers. He is still of the opinion that “Ukraine is a different story; it is a story of black and white: Vladimir Putin is the aggressor, and Ukraine is defending the EU values and principles.” At the same time Ukraine can’t let the peninsula of Crimea go, while the Westerners believe this issue has been closed. Ukraine is being ruled by disreputable oligarchs, who 25 years ago founded today’s corrupted system. Ukrainian society embittered, and as hryvnia is depreciating, more of the society will become impoverished. It is estimated that only 13% of Ukrainians unconditionally support Poroshenko’s actions, and 57% of respondents do not trust the head of the government Arseniy Yatsenyuk.

Analyzing the international developments, the impression is that Washington brings Ukraine to sacrifice for the sake of the great global goal. There is no and there can’t be a military solution of this situation. There is no good reason for NATO to increase the number of its military units in Eastern Europe, because Russia will respond symmetrically: next year Russia plans to expand its nuclear capacity to 40 new intercontinental ballistic missiles. It is a significant international success of Russia that during the vote on the Crimean peninsula at the meeting of the UN General Assembly, 58 out of 193 countries abstained. Among them was the new world power – China.