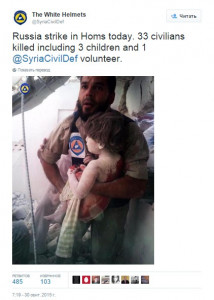 From the moment the first Russian warplanes started launching attacks inside Syria, a new campaign in the information war was also launched, with various groups trying to get their stamps on conflicting stories about what exactly Russia attacked, whether they hit ISIS, ISIS allies, pro-US rebels, or just random Syrian civilians.

At the center of one of the bigger controversies was the “White Helmets” organization. Formerly known as the Syria Civil Defense, the group is heavily funded by the US State Department, and while the group claims to be purely an aid group, and not to be taking any side in the war, their statements overwhelmingly tow the official US line, leading to allegations that the group is little more than a “propaganda outlet.”

Early in the day, the groupclaimed Russia killed 33 civiliansin its attacks, including three children, and attached a photo to the story which was quickly pointed out to be from an incident five days prior, which had nothing to do with Russia.

Russian Deputy PM aide Dmitry Loskutov was quick to criticize the post, leading to an angry condemnation from the White Helmets, who said Russian claims they were attacking ISIS were “bullshit.”