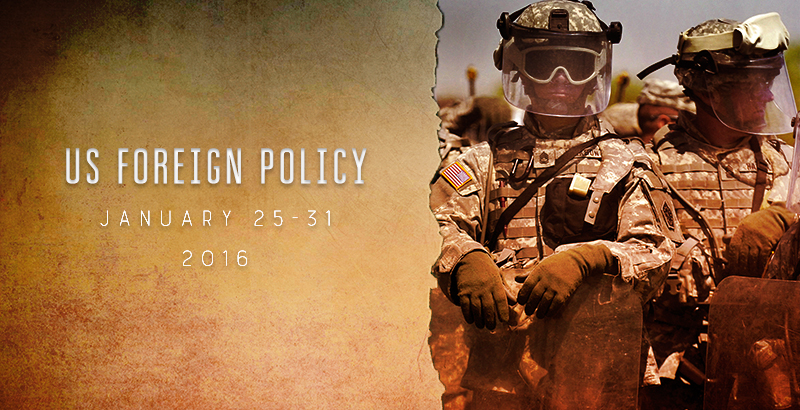 On Jan.25, the U.S and coalition military forces have continued to attack Islamic State of Iraq and Syria. Officials reported details of the latest strikes.

Coalition military forces used rocket artillery in addition to attack, fighter, and remotely piloted aircraft to conduct 16 strikes in Iraq, coordinated with and in support of the Iraqi government:

On 26/1/2016, delegations from 18 nations including the United States met in Kingston, Jamaica, Jan. 26-29, for talks on security cooperation capacity building in the Caribbean.

More than 100 leaders and experts in defence, government, law enforcement and emergency management took part in the 14th Caribbean Nations Security Conference, or CANSEC XIV, where they examined known challenges to regional stability and discussed the policies, strategies, initiatives, mechanisms and capabilities that support regional collaboration and shared security goals.

Tidd told attendees he was eager to hear their perspectives and ideas on ways to improve collaboration.

Between 2010 and 2015, the U.S provided over $387 million under CBSI for law enforcement programs to address the threats, complemented by longer-term, rule-of-law programs, economic development activities, and military capability programs.

Mullins-Hall called the State Department-funded Technical Assistance Field Team, one of the most successful programs assisting the region under CBSI.

Based from Southern Command(Southcom), the 15-member team is comprised of engineers, electricians, technicians, communications specialists and logisticians from the U.S. Coast Guard and U.S. Army. The team assists the region’s naval and maritime security forces with improving maintenance, supply and logistics capabilities critical to ensuring the sustainment and availability of maritime patrol fleets for counter illicit trafficking operations.

The second day of CANSEC XIV began with discussions on cooperative efforts to counter transnational organized crime in the Caribbean and improve information sharing.

The final day of CANSEC XIV included a briefing by the Inter-American Defence Board and updates on the 12th Conference of Defence Ministers of the Americas, a meeting of Western Hemisphere defence ministers to be hosted in October by Trinidad and Tobago.

On Jan.27, U.S Secretary John Kerry travelled to Beijing, People’s Republic of China, for meetings with senior leaders of the Chinese government ‎to discuss a range of global, regional, and bilateral issues, including North Korea.

On Jan.28, U.S Defence Department officials held a video conference to discuss ongoing implementation of the U.S-Russia memorandum of understanding on flight safety over Syrian airspace.

The discussions follow video conferences between the U.S Defence Department and the Russian Ministry of Defence in October 2015 to discuss the safety of coalition air operations in Syria.

“The conversation was constructive and the two sides agreed to continue safety discussions in this format in the future,” Cook noted.

On Jan.29, in a statement, Defence Secretary Ash Carter commended the Netherlands for its announcement that its pilots will expand their current mission over Iraq to participate in coalition airstrikes against the Islamic State of Iraq and in eastern Syria.

During discussions in Paris last week, the defence secretary met with his counterparts from six of the leading contributors to the campaign to counter ISIL, including Dutch Defence Minister Jeanine Hennis-Plasschaert.

While there, Carter said the “lasting defeat of ISIL must be a global undertaking, because it is a global threat.” The nations at the meeting reached broad agreement on the military campaign plan and the capabilities required to deliver ISIL a lasting defeat.

Carter said he was grateful for Hennis-Plasschaert’s “immediate action following last week’s meeting, and for the continuing commitment from the Dutch people to this fight.”

On Jan.30 the U.S. and coalition military forces have continued to attack Islamic State of Iraq and Syria. Officials reported details of the latest strikes.

Attack, fighter, and remotely piloted aircraft conducted 17 strikes in Iraq, coordinated with and in support of Iraq’s government: