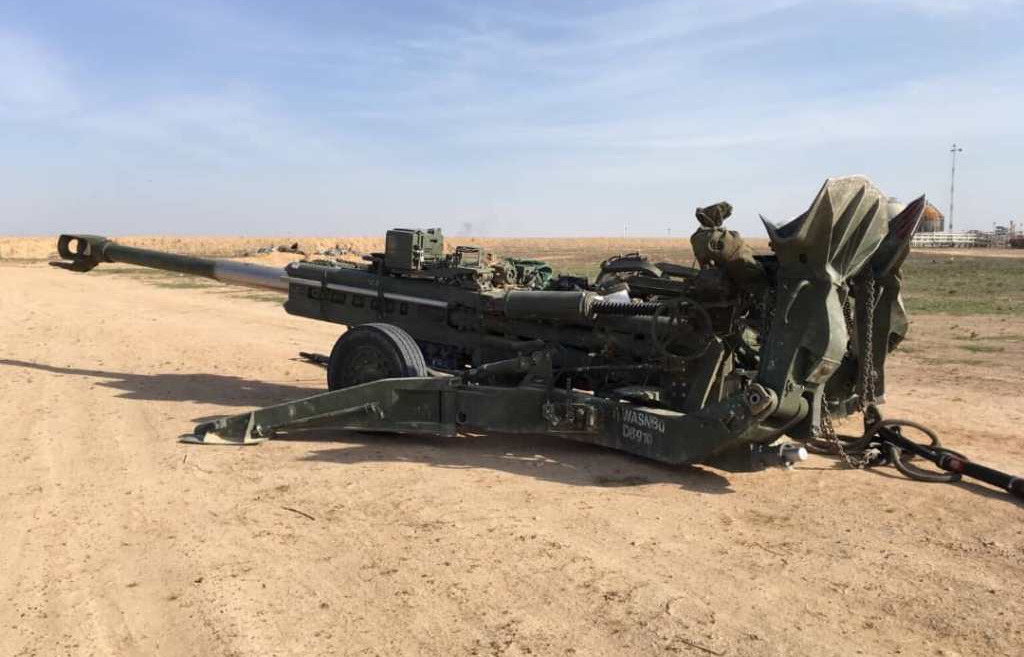 One of several M777 towed howitzers which were deployed by the US Army in northeastern Syria in 2020. Source: sdf-press.com

On June 14, US forces held a live-fire exercise with heavy artillery at a base located within al-Omar oil fields in Syria’s northeastern region.

Soldiers from the US Army 156th Infantry Regiment and 141st Field Artillery Regiment took part in the artillery exercise. According to the US Central Command, the troops trained on the M777 155 mm towed howitzer.

Last year, the US Army deployed a number of M777 howitzers in northeastern Syria to support its allies in the Syrian Democratic Forces. The howitzer has an effective firing range of up to 40 km and can fire GPS-guided munitions and white phosphorus shells.

A similar exercise was held in al-Omar oil fields more than a year ago. The fields are the largest and richest in Syria. The US maintains a large base there.

Earlier this year, the US-led coalition denied deploying more troops or establishing new bases in northeastern Syria. However, recent developments suggest otherwise. On June 17 alone, a convoy of 55 trucks carrying supplies and equipment for US troops entered the region.

The ongoing military buildup in northeastern Syria indicates that the US is not planning to leave the region anytime soon. Washington claims that its troops are present there to combat ISIS remnants and to “guard” the oil.

The yankees never learned to not steal…you go to hell for killing civilians with sanctions or stealing their goods. You Turkic Zion and yankees can hide your ugly faces in this world but what are you apes gonna do in the afterlife.

Another occupying, subjugating, and thieving warcrime on behalf of their Jew masters. They may want to, amongst other things, look up Article 3, Section 3.

The US will have to leave eventually. Corruption at home has reduced its status to third world and nowhere in history has a third world country ever had an empire. Decades of corruption has killed the golden goose and the US MIC ate it. No more weaponised reserve currency with which to threaten world trade and development.

The US will soon have lots to attend to at home whilst its population starves and riots.

Why the hell are those convoys not hit with missiles?

Armenia/Azerbaijan conflict showed the true value of these static assets, as soon as the SHTF, drones and loitering ammunition will destroy these outmoded concepts within hours.

Yay, my taxpayer dollars being wasted on ammo being shot in an empty desert, in a country that the U.S. is occupying illegally.

Russia should send them a few Kalibers….