The GBU-43, the most powerful non-nuclear bomb, has been for the first time used by the US in combat conditions. 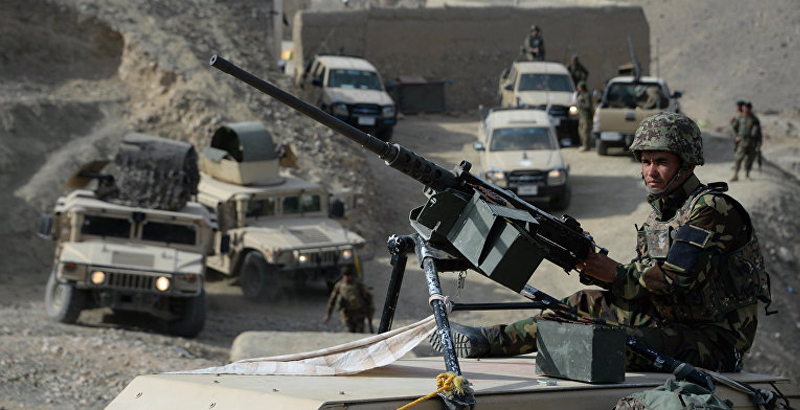 The US has for the first time used the most powerful non-nuclear bomb in combat conditions, targeting terrorists of the Islamic State (IS) group, the RIA Novosti news agency reported, citing the Pentagon.

“The strike was carried out in Achin district in Nangarhar province on Thursday. The target was IS militants, their system of tunnels, which they used to move. The GBU-43 [Massive Ordnance Air Blast] was used,” a representative of the Pentagon press service told the news agency.

He confirmed that the bomb had become the most powerful non-nuclear weapon, used by the US. According to him, the ammunition was dropped from the MC-130 aircraft.

A Pentagon’s press release quoted the words of commander of the US forces in Afghanistan, John Nicholson, who noted that the powerful bomb is needed to destroy tunnels and bunkers of terrorists.

According to data from open sources, the weight of such a high-explosive aerial bomb is 9.5 tons. An explosive mixture of hexogen, tritol and aluminum powder is used in the bomb. The GBU-43 is equipped with a satellite guidance system. The first test of the bomb was conducted in 2003. As it is claimed, in total, there are 15 such munitions on the US arsenal.

Earlier, it was reported that the US President Donald Trump’s administration was developing a new strategy for Afghanistan and planned to use more military forces in the country.

I thought the Russian FOAB (father of all bombs) was the most powerful non-nuclear bomb, more powerful by far than MOAB. Has that now changed or is the author mistaken?

You are right but MOAB is “the most powerful non-nuclear weapon, used by the US“.

The US cannot complain now if Russia uses her FOAB against terrorists in Syria :)

i really hope they do soon lol

daesh is in afghanistan too? wow did not know that

Yeah, it’s really bad there, as NATO troops and allies can’t properly defeat the Taliban, AQ, and ISIS, or even train the Afghan forces correctly. And in usual NATO fashion, they start to claim countries like Pakistan, Iran, and Russia are supporting them.

Lol wow that is pathetic, they could learn a thing or two from SAA!

u dont know anything about there capabilities go and search, ANA is by for more skilled and better organized then SAA.

So why did expo marker say its really bad there?

Aviation Thermobaric Bomb of Increased Power (ATBIP) nicknamed “Father of All Bombs” (FOAB) is the most powerfull non-nuclear bomb. The Blast yield of the FOAB is 44 tons TNT /while the GBU-43 has “only” 11 tons TNT,…the good things there would be no white helemts left to complain.

yup, everybody will agree after using in combat conditions. until that time is hypothesis.

The Russian federation model has a 4x bigger blast and it’s actually physically smaller in weight and size by a good margin if I remember correctly. That would make it even more efficient in combat and logistics needs I would think.

A dug in tunnel system in hardly accessible mountain regions is the place to use these kind of bombs.

Whether there was a real strategic value in the targets is beyond my knowledge. It is even possile that its only use was to give a signal to NK which is about to test a nuclear bomb in a similar area.

The US site Veterans Today thinks these are a cover for the of micro nukes.