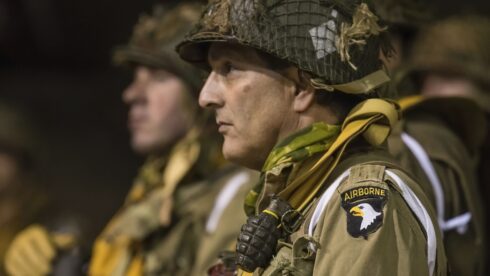 The Pentagon has decided to extend a troop deployment in southeast Romania, which is part of the US military buildup in Eastern Europe that was ordered around the time Russia invaded Ukraine.

The US currently has about 4,000 members of the US Army’s 101st Airborne Division based out of the Mihail Kogalniceanu Air Base near the Romanian city of Constanta on the Black Sea. The New York Times said the base is just “a seven-minute rocket flight across the Black Sea from where Russian forces have settled in Crimea.”

As part of the deployment, some of the 101st Airborne members have been simulating war with Russia, just miles from the Ukrainian border. The troops there have been conducting exercises with Romanian forces involving artillery, launching helicopter assaults, and digging trenches similar to those on the front lines in Ukraine.

According to the Times, the 101st Airborne troops will leave Romania in about two months but will be replaced with a different brigade from the 101st Division. The next deployment is expected to last about nine months and will be led by senior officers, including a two-star general.

In October, CBS News embedded a reporter with the 101st troops that were drilling in Romania just four miles from the Ukrainian border. Commanders told CBS that they were in Romania to protect NATO territory but said they were ready to “fight tonight” and said they could enter Ukraine if the war escalated.

The 101st presence in Romania marks the first time the division has been deployed to Europe since World War II. The buildup has brought US troops numbers in Europe to over 100,000 for the first time since 2005 and includes 12,000 US soldiers based in Poland.

USA is afraid from a Russian breakthrough till Transnistria? The acting and saying from USA is in big contrast. They say Ukraine is enevitable from winning but at the same time they prepare themself for a total loss of Ukraine.

When Russia gave up Kherson, their aspirations for getting to Moldova left with them.

Ahmed the Cocksucker
Reply to  AliG

The great and the famous Screaming Faggots brigade will overtale the World!!!! They have already overtaken all Romanian inbred gypsies!

You can’t expect anything truthful from the empire of lies.

Name a country where the US army went to and left without a fight. They come as friends but in fact are occupiers. Romania, being led by a traitorous stooge of German descent, Iohannis, is under occupation. All its wealth is being stolen by the Ziomafia parasites controlling the traitors in government.

Same in Italy. 120 US military bases…

that good we will take them aout on dinner koffie

Didn’t they leave Ukraine at the start of the SMO? Moldova’s not in NATO either, that could be their next plan – training more recruits to start a new proxy war if Russia gets that far!

Leclerc tanks in Romania, Leopards already in Ukraine, NATO is about to intervene. Good luck everybody

Clyde
Reply to  The Contra

I bet many of them are AWOL and might end up dying somewhere in Ukraine.

Don’t forget many of the American military have had to take the covid jab! So it’s not looking good as they are dropping like flies back in the US from the death jab

Ahmed the Cocksucker
Reply to  Disinfo

They are mostly transgender faggots. So I doubt it.

Look it. Hitler wasn’t able to do it with a 3,000,000 + “coalition”. France, with their 600,000 “coalition” couldn’t do it. For the US to have a chance, they would need at least 500,000 – which means a draft would need to be called. DO YOU THINK regular Americans would want to be DRAFTED to fight for literally their lives? For what?

Hi. Romanian here. We were never asked whether or not we want these western European and American troops in our country. The EU and NATO just decided it without asking us. These are occupation forces here to keep the country from rebelling, since the people are fed up and even the Romanian army is fed up. But we’re a country under occupation, we don’t get a say in how things are run, we just get colonial overlords imposed on us by the WEF.

The moment a 101st solder steps into Ukraine is the moment the US homeland will get a real taste of war. The US Zionist controlled gov should be careful of what it wishes for.

US extends tampon supplies to Romania. Logistics simply do not favor these phaggots

Damn yankees, get the hell out of there!