A large-scale radioelectronic warfare campaign against the Islamic State (IS) terrorist group has been started by the US in the Middle East. 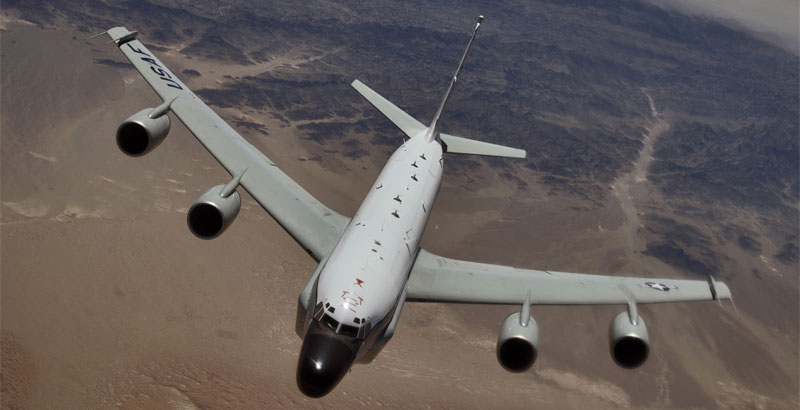 RC-135 Rivet Joint reconnaissance aircraft moves into position behind a KC-135T/R Stratotanker for an aerial refueling at a speed greater than 250 knots over Southwest Asia (Photo: US Air Force / Master Sgt. Lance Cheung)

US military has started a large-scale campaign against the Islamic State (IS) terrorist group, inundating the Middle East with reconnaissance airplanes, the Izvestiya newspaper reported.

For the first time in five years, the RC-135 Rivet Joint ELINT reconnaissance aircraft, which carry out their sorties from the Al Udeid air base in Qatar, have been spotted in the area of the Persian Gulf. The EA-6B Prowler electronic warfare aircraft of the US Marine Corps, which take off from the Incirlik air base in Turkey, operate in conjunction with the RC-135. According to the newspaper, the EA-18G Growler two-seat electronic warfare aircraft (a specialized electronic warfare version of the F/A-18F Super Hornet), which are based on the Theodore Roosevelt aircraft carrier, also take part in the operation.

It is assumed that Americans operate mainly over Iraq, while the Russian Tu-214Rs perform a similar mission in the Syrian sky.

In early December, spotters noticed that the RC-135s took off from the Qatari Al Udeid air base and made way to the north, in the direction of Iraq. Then, official photos, showing these aircraft during their refueling on the way to Iraq, were published online. According to the article, the main targets for these fighter jets are cellphones and portable civilian radios, used by jihadists.

Reportedly, analyzing collected information, a crew can determine location, traffic route and even suggested contingent of groups of militants. The main thing is to provide the continuity of a patrol, as finding of enemy wired-radio outlets needs processing of a large body of data.

According to American experts, militants mostly use commercial radio stations and cellphones, as well as actively use capabilities of the Internet. According to the newspaper, monitoring of the radio broadcast allows to disclose commanders and either jam their transmitter units, using a powerful signal of own transmitters or aim bombers on them.

As one of the authors of the book ‘Electronic warfare – from the experiments of the past to the decisive front of the future’, Sergey Denisentsev, noted, the idea is to maximally hinder the usage of the radio broadcast by the enemy. Even if the task is solved for 95-99%, this is already a very serious problem for the enemy – terrorists will not be able to use mobile communications, ordinary commercial stations and cheap tools for exploding of homemade bombs via radio. There are modern military radio stations that can operate in conditions of electronic countermeasures, but the IS has limited opportunities for purchase of such radio equipment, Denisentsev concluded.

Is the reporter sure that the US’s electronic capabilities are going to be used against ISIS? To date, the U.S. has supported ISIS materially and on the battlefield.

Of course my friend. US Electronic Warfare support ISIS and every al-nusra guy in the ground always from the beginning. Because how do you think it was so successful ISIS hiding its invasion in Palmyra with 5000 men transporting tons of belic materials without being detected and located by the Russian intelligence apparatus with all their sophisticated hardware, and by all the others allies of Syria?

Hey Terence,USA supports Al Nusra in Aleppo.There is no doubt about this.And you are right about Palmyra.This was mistake of Russian and Syria intelligence forces.

US picking a fight with Iran if they are doing recon work over the Persian Gulf.

Now that Aleppo is liberated not a single white helmet to be seen, so where did they go, not a single shred of evidence they ever existed. Not a bombed out ambulance nothing, one could almost think they were just a propaganda publicity stunt (run out of a studio in Hollywood?) to sell the Jihardists as democrats and freedom fighters.

After all the emotional turmoil of the UN it appears it was all bollocks.

Ha ha. About $100 millions worth of bollocks!

Terrorists haven’t used electronic communications for donkeys years. It was suggested that surprise attack on Palmyra was successful because radio signals of government troops were jammed.