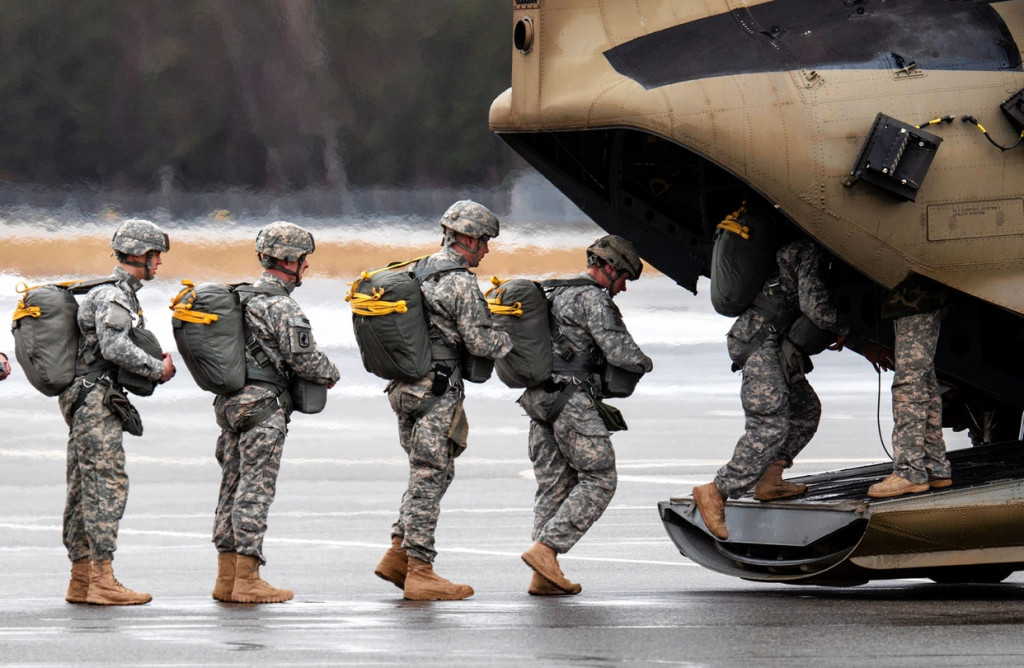 The US military is expanding the Kobani Airport runway in order to be able to receive large transport aircraft, the Basnews agency, based in the capital of the Kurdistan Region of Iraq, reported on Monday, citing a source in the US-backed Syrian Democratic Forces.

“The source, who requested anonymity, revealed to BasNews “The US military is expanding the runway of Kobani Airport, in order to receive the giant aircraft,” confirming the presence of hundreds of technicians and experts and American military personnel at the airport.

The source explained that “the airport runway in the past was 1,100 meters long with the width of 60 meters, and it is expected to be expanded to 1,700 meters long and 110 meters wide,” adding that a four-meter-tall wall will also be erected around the airport,” the article reads.

The report also says that the US military is installing high-frequency radar systems on the hills around the airport in order to protect it from air attacks.

Fighters of the Kurdish People’s Protection Units (YPG) have been allegdly discharged from protecting the area. The airport is now guarded by US troops.

Experts believe that the storm of the ISIS self-proclaimed Syrian capital of Raqqah will push Washington to increase its military presense in the country, deplyoing more troops, artillery pieces and other military equipment.

These forces will likely be redeployed from Iraq after the end of the anti-ISIS operation in the western part of Mosul.

I assume meant is the new airbase near the Lafarge plant?

The US now has at least three airbases within Northern Syria. Extend the runways a little more and they do not need Incirlik anymore

Incirlik is a long term base, with houses for families and a lot more facilities on ground. Enabling continuous self sufficient function. That can be built neither in Iraq nor in Syria, due to security reasons.

Turkey is an ever increasing security risk. I think they could place one up near the northeast eastern tip of Syria near iraq where it would be easier to defend if you ask me.

If Turkey is an increasing risk (which you are absolutely right about), putting it next to Turkey doesn’t make sense. Plus logistics becomes a headache, Through Turkey?, Assad/Russia’s Syria?, or Shia/Iran’s north Iraq?. The only option is an ally state. The only ally there is Turkey (so far), Israel and gulf countries being too far.

It all depends where the planes need to be. Southern Syria, eastern Syria are closer to northern Israel then Incirlik.

Sir you miss a point currently USA/Nato can fly over Iraq,Libya or any arab country Their can fly in and out like their want so their movements are not restrict.Want their need is bases to settle.

Who the fuck invited the USA into Northern Syria??. The Syrian People?? The Syrian government?? This is another invasion ala. Iraq. Once Isis bombshells and splinters those fanatics will join Al Nusrah and other Islamist groups probably 80-100k strong. Their new goal will be to kick their erstwhile ally the USA out of Syria. There you have assured endless war for the Neocons and military industrial complex.

Ah, but Syria have done exactly the same thing; they funnelled Palestinians into Lebanon, caused a sectarian civil war and basically turned it into a Muslim majority country, where a radical Islamic militia dominates the country, a militia that they directly supply arms too. And not just arms, one of the largest supplies of rockets in the world, which, like Hamas, doubtless intend to be used on civilians.

So invading Syria is wrong, but Syria kinda had it coming.

Those Palestinians were refugees from where ? Israel . And you wish to blame Syria . Hezbollah the Shia backed Lebanese , have kicked Israel out of Lebanon , but are far more defensive than Hamas , who are Sunni , and Sunni kingdoms backed . Gaza and the West Bank can never become a nation for that reason alone . So rather than create a three state solution , Israel delights in blaming the Palestinians , and keeps nibbling away at what is left of Palestinian lands . It could be arranged so that revenue of the oil and gas off-shore of Gaza is divided three ways , making all three territories , Israel , Gaza , and the West Bank , wealthy . Greed can kill you , and if Israel does not correct this vast injustice to the Palestinian peoples , who had it coming ?

Jordan was designated for Arab Palestinians, and they were kicked out of Jordan for creating a war and trying to take over.

Israel were in Lebanon to ensure peace, after a war started by radical Islamists. And they were effective in doing that with their mere presence, and now a foreign backed power dominates Lebanon, one that wants to destroy Israel and its people, so civilians, just like Hamas. But that’s way better right!!

That’s one big crock of shit you’ve written. The Palestinians were there before Syria intervened in 1976. Like Ronald pointed out the Israelis forced them there. Syria did intervene at the behest of the besieged Lebanese Government. The Shi’ite Lebanese population was always in the majority in Lebanon , they were looked down upon and oppressed by the Francophone Lebanese Christian Ruling class. After the Iranian revolution of 1979 they had a direct backer in the form of Iran so they rose up and joined the Civil War and at the end of it they were rightfully where they belonged in an odd fashion with the result being Hezbollah. Hezbollah is the guarantor of the rights of the majority of Lebanese (Shi’ite) whether you like it or not. As for the Israeli civilians getting hit by Hezbollah rockets , good for them. They cannot oppress , disperse and steal land from a whole Palestinian population. According to the UN Mandate of 1948 the Palestinians were supposed to get half of Israel , the Israelis stole the whole country. They want to cage and oppress the Palestinians and label them as terrorists through their Zionist media. The more rockets the better , until the Palestinians are free.

No, they weren’t, Jordan kicked Palestinians out of their country after they tried to take over. And no, every Arab neighbour to Israel forced a mass displacement, through not one but two wars in which they all got their asses kicked very badly. Don’t start wars and then cry about the fallout when you lose.

That’s not true, Christians were the majority in Lebanon before the invasion, perhaps you found the opposite written in an Islamic source but actual factual information will prove otherwise. The reason Lebanon is now Muslim majority is because the country was flooded with Palestinians and the persecuted Christians fled en masse from being slaughtered by these invaders.

What Palestinian population, these people arrived in Israel only a few decades prior, when Jews were starting to build up this near empty area a century ago! You realise that Muslims oppress minorities on a daily basis right? In almost every Muslim nation. Iran arrests Christian, the Saudis too. The UN designated Jordan for Arab ‘Palestinians’ and Israel for Jews actually.

Muslims want to and are taking over all over the world, it’s good to see at least one country, in the form of Israel, fighting back and giving them a taste of their own medicine.

Still another big crock from you. Christians were never in majority in Lebanon , they did however have the majority of money after being favoured during the French colonisation. Palestine was for centuries under Arab then Ottaman rule after the Crusades. The Arabs were in majority there since. They did not arrive a few decades prior to 1948. It was the Jews fleeing persecution in Europe that started arriving in Palestine from the late 19th Century onward. Get your facts straight. The fucking Zionists stole the land and this is not from any Islamic website as I am not religious nor do I take the bullshit of anybody. Do proper research.

Revisionist history to back up your pro-Islam views, and then you tell me to do proper research! Laughable. You’re a good little dhimmi Paul.

Revise your jaundiced eye history of the world and be objective. Your Pro-Zionist view makes your commentary laughable. Btw…did you comment 10043 times and give yourself 10043 upvotes??. Or does your Troll software do it automatically for you?? As I said I don’t like any fucking mainstream religion. However I fucking hate Zionists and their trolls more.

So every single place you could find online about this topic is lying then?

No, Jews>Muslims. It’s as simple as that. One co-exists, the other wants to take over the world. You should have a far, far bigger problem with them.

I wouldn’t call honesty, truth, trolling. If anything, typically ignorant Muslims/dhimmis like you spreading your misinformation and general ignorance are the biggest trolls of all.

Ok fuck off , troll on and keep stroking yourself. Narrow minded religionist , self important people/ trolls like you keep the internet ticking over. Go on , then. You must have a lot of pro-zionist commentary to catch up on. I won’t even bother to explain the difference between Zionism and Judaism to you. It’s simply too much for you to comprehend.

Please show me on a map from ant time in history that shows this mythical land called Palestine. DO NOT show me a map of “the British Mandate”.

This USA/Nato war was plan to have Syrian Russian base,Ukraine Russian Sevastopol base,Iraq bases Libyan bases to control oil and gas.ISIS is Nato/USA Instrument to cause chaos for this particular countries Government on behalf of them USA/NATO.Saudi Arabia and Turkey was ear mark as oil and gas hub to replace Russian gas to Europe.Turkey Russian oil and gas stream will never materialise it is actually use by Turkey to cool Russians down to be involve in Syria for their hidden agendas.Yemen plan is ongoing with UN eye blind strategy. Next target is Iran once the first strategy work their Nato and allies will play with the prices to subdue Iranian market or else accusation and war plan against Iran will proceed.Plan B is to force China to retreat from oil south China sea and at the same time wage a war against Russia to retreat from arctic and then their USA/Nato will become power house of everything.Turkey and Russia agreements are just paper works to eye blind the Russians.

Israel/Zionist cannot have a opposition Gov in Damascus which unites UN to demand Israel leave Golan heights. The Jews got the British/French Mandate changed in 1923…where Syria lost Half of the Sea of Galilee. …to nothing. Israel/Zionist Bankers pushing Empire to tumble the 7 Nations in 5 years ( delayed…yet still ongoing)….they can via Safe Zone and International Administration ** marked under Rand map, Gain control and towards even Iraq…considering the Barzahni Zionist Kurds will Occupy North Iraq with US military coverage. Jordan is already control via US military and Legacy British Colonial.

Russia has a presence in Syria Now which will remain, However….to what degree does Putin obstruct Israel…and support Hezbollah And IRGC, ….as Netanyahu is no doubt worried Israel could lose their safe zone From Golan to Daraa Province. Hezbollah operating in the Region and with IRGC.

it appears that this news routinely comes out, some times from sdf sources, sometime from hezbollahs and so on. So far it’s just chatter, we will see how this will shape.