About 1700 soldiers of the elite 82nd Airborne Division have been sent to Iraq by the Pentagon. 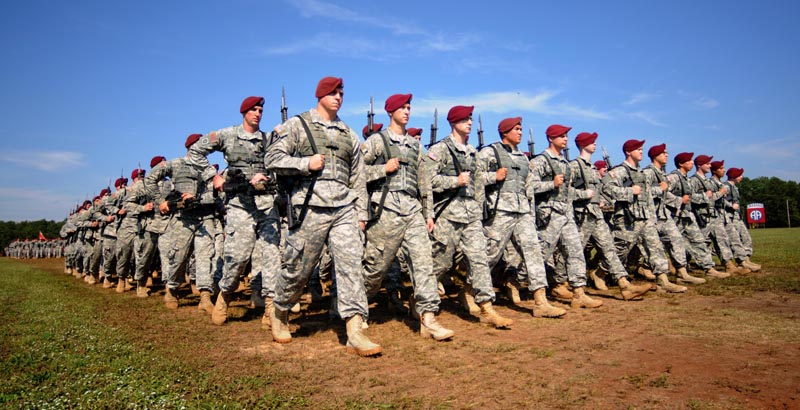 The Pentagon sends 1700 soldiers of the elite 82nd Airborne Division to Iraq. During the previous two months, the paratroopers have been intensively preparing for battles in a city, including in conditions of usage of chemical weapons by an enemy. It is expected that along with the Iraqi Security Forces, they will take part in the assault on Mosul, the capital of the Islamic State (IS) terrorist group in Iraq.

According to official US Army‘s sources, the 2nd Brigade of the 82nd Airborne Division will soon become a part of the forces, involved in Operation Inherent Resolve (OIR), aimed to defeat the forces of the IS terrorist group on the territories of Syria and Iraq. In December 2011, this military unit ensured the withdrawal of US troops from Iraq and the completion of Operation Iraqi Freedom. However, according to the US Command, this time, the paratroopers will not directly participate in hostilities. At the same time, before sending to Iraq, they completed a full course of training at the Fort Polk military base in Louisiana.

In particular, fighters of the 82nd Airborne Division learned to operate in urban environments and storm enemy’s fortifications under cover of artillery fire and air strikes. The intense combat training began in early September and continued until the sending of the paratroopers to Iraq. During the last two weeks, units of the 2nd Brigade worked off actions in conditions of usage of chemical weapons by an enemy.

In total, the US has about 5,000 soldiers in Iraq. According to official sources, only about 100-200 US troops, mostly fighters of the US Special Operations Forces (SOF) and air controllers, are in combat formations of Iraqi troops, advancing on Mosul. Tasks that are being solved by other 4,900 soldiers are not specified.

Pentagon officials insist that American officers act as military advisers to Iraqi commanders, give them intelligence information, coordinate air strikes, as well as are responsible for logistical support.

However, the facts evidence that the Pentagon forms a ‘powerful fist’ of elite military units, coached to conduct war in urban environments. If the Iraqi forces fail to make progress by themselves, these units will go into the battle. Currently, there are 1,700 soldiers of the 2nd Brigade of the 101st Airborne Division in Iraq. They are stationed at the Qayyarah airbase, about 60 km from Mosul. Units of the 18th Field Artillery Brigade are deployed at the same place in order to provide fire support to the US paratroopers. In addition, a battalion of marines, named Task Force Spartan, also acts in the area of Mosul.

The Apache and Super Cobra helicopters provide direct support to the Iraqi forces and also help to maintain the morale of local fighters. US combat engineers, including officers of the 101st Division, actively operate in the rear of advancing units – they help to maintain roads in a working order, seeking out and eliminating explosive devices.

Formally, soldiers of the 82nd Airborne Division should replace their colleagues from the 101st Division. However, any exact time limits of the rotation are not reported, and, in practice, it may happen that in the next 1-2 months, right in the midst of the assault, there will be twice as many paratroopers near Mosul.

The 82nd and 101st Divisions are parts of the 18th Airborne Corps, which is under command of Lt. Gen. Stephen Townsend, who is also a head of Operation Inherent Resolve. So, in fact, the whole 18th Corps, including units of artillery and air support, will be deployed in Iraq soon. This will greatly increase effectiveness of actions of troops if they have to join the battle, and it is almost inevitable, taking into account the limited success of the Iraqi Army.

We can assume that the 82nd Airborne Division will be sent to storm the western suburbs of Mosul, and its task will be to capture the entire city or to oust terrorists from it. The second variant – soldiers of the 2nd Brigade will block the western approaches to Mosul in order not to allow terrorists to leave the city and to prevent approach of reinforcements to them.

Tags:iraq, Mosul, Operation Inherent Resolve, the us, us armed forces, us army, us soldiers, usa

I though diversity is a strength and makes everything better. What’s going on at Bragg?

its always southern white boys that make up the majority of the U.S. military and elite units and also the casualties in any conflict.

Nothing new here. The process to get to a unit like such requires one to volunteer for various training’s, and to pass those selections as you move forward. to this day the enforced diversity does not apply to places where those who hold it in high regard do not wish to be. You will find them equally dispersed in premium housing on the base. Just not equally in the forward combat units.

Wait a sec… ‘Gravedigger’ Townsend’s boys will not ‘directly participate in hostilities’? Oh, hell. He probably has rows of empty aluminum coffins already stacked five high at Qayyarah ready for his ‘heroes’. They’ll be the target of every jihadi car-bomber in the neighborhood. Townsend apparently loves a good meatgrinder – think of the medals!

This is the same U.S. general that thinks it’s a good idea to send his troops into Syria to help retake Raqqa (and thus start WWIII with Russia). I wonder how many shekels this guy earns on the side from his real bosses in Tel Aviv, the f#king traitor.

Exactly. He’s taking it up the ass from the Obomber. Lots of Lockheed Martin money, doncha’know!

A little odd, don’t you think: “…according to the US Command, this time, the paratroopers will not directly participate in hostilities”, and yet….

“In particular, fighters of the 82nd Airborne Division learned to operate in urban environments and storm enemy’s fortifications under cover of artillery fire and air strikes. The intense combat training began in early September and continued until the sending of the paratroopers to Iraq.”

Strangely the writer doesn’t explain this apparent contradiction. As you suggest, the 82nd aren’t sent there for traffic control duties.

The US military arriving to help you is like the Landlord literally screwing you ** to get the rent.

Iraqi military and coalition forces should step aside, surround Mosul and let the Yanks fight ISIL/ISIS on their own. You will soon see how good they are and whether they are serious in defeating them.

This is not a sign that things are going well in Mosul. I am thinking these troops have to be used. ISIS is probably ready for them anyway. Each yard gained will be in blood. This is going to be rough stuff.