Some 2,500 soldiers from the 2nd Brigade Combat Team of the 82nd Airborne Division is being dispatched to Kuwait by Pentagon in order to be sent to Syrian and Iraq to fight against the Islamic State terrorist group. 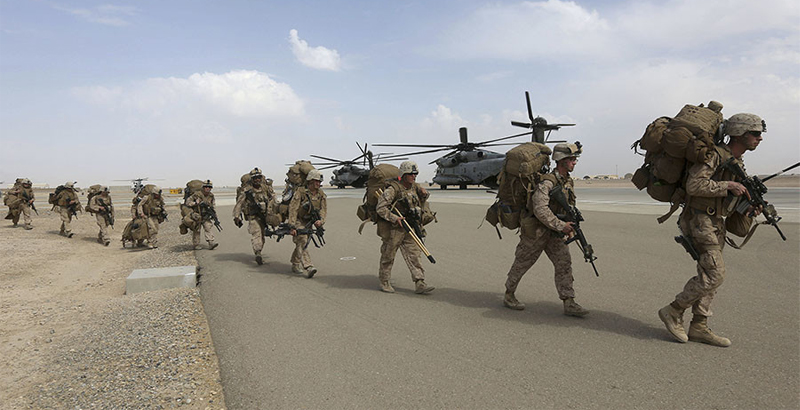 The Pentagon is dispatching 2,500 servicemen from the 2nd Brigade Combat Team of the 82nd Airborne Division, based at the Fort Bragg military base, to Kuwait, from where they will be sent to Syria and Iraq to fight against the Islamic State (IS) terrorist group, the Army Times newspaper reported on Friday. The newspaper also noted that 1,700 soldiers of the 2nd Brigade Combat Team have already been deployed to the region between Iraq and Kuwait.

On Thursday, the Reuters news agency reported, citing an unnamed military official, that the US Defense Department intends to have rapidly deployable forces in Kuwait as part of the ongoing change in the US strategy to defeat the IS.

On Wednesday, deputy chief of staff for operations of the US Army, Lieutenant General Joseph Anderson, said that the additional troops will be “postured there to do all things Mosul, Raqqa, all in between.”

“So the whole brigade will now be forward,” Anderson noted.

However, the Army command refused to provide any details on the exact timeline of the new deployment.

On Thursday, commander of the US Central Command (CENTCOM), General Joseph Votel, said that more “conventional forces” would be sent to the Middle East in order to conduct so-called “stability operations.” Speaking at the Senate Armed Services Committee, he also noted that “as we move more towards the latter part of these operations into more of the stability and other aspects of the operations we will see more conventional forces requirements perhaps.”

“We have become very comfortable and capable of operating together,” Votel noted. “So, what I have pledged to our commanders and what I expect from them is for them to ask for the capabilities that they need and then for us to ensure we have the right command and control, the right force protection, the right resources in place to ensure that we can function properly together.”

According to the Army Times, there are about 6,000 US troops in Syria and Iraq at the moment.

Is the US really going to fight ISIS….secure Syria… and hand that back to Assad …with Putin standing next to him smiling?

Netanyahu and Erdogan rush to Moscow. …no one reports any facts,…only suggestions of What is being dealed. This occurring as the Illegal US forces pile into Syria.

The Western reaches of Iraq to Jordan /Syria is ISUS turf… They going where when US,Kurds,PMU show up to run them out after Mosul is taken.

Is the US going to steer them to say Yemen,…back to Libya?. It’s unlikely the US wants to face many 1000s of truly crazed soldiers.

If ISUS flees Raqqa/melts away on orders from Uncle Shlomo, ….they could fall back to Deir Ezzor… Thus the US and Kurds would have to follow them, Here one asks what SAA and Russia will do…. Or will Trump rescue Deir Ezzor City aswell in some bizarre Kabuki theatre. ?

I think your last line sums it up very well. ISUS caliphate is no more. They are getting shot at while crossing the river in boats. Their lines of communication are no more. Even if could get across the desert, they would not get across the Jordan border. Their best option is to shave their beards and try to get away.

Don’t know. I’m just hoping the US is really serious about fighting ISIS and helping SAA now under trump, as opposed to secretly arming and funding them under obummer & co.

Trump’s a sock puppet of the deep state, Zionists and MIC all around him. Trump is 180 every promise during election cycle. Trump is overt obtrusive geostrategic. ..just as Obama and Bush. Trump is pushing US forces onto Russia border and stuffing in Mechanized Battalions.

The US calls it full spectrum dominance. So…..defeating ISUS for Syria hardly seems rational, ..When the US posture to Russia And China is… .

A few battalions in Baltics means nothing (just a trip wire). Besides, I thought Obama ordered this NATO deployment.

Hi The US is facing serious economic crisis. The Fed is raising interest rates. Unemployment is not less than 5%….is 20% Commercial/REIT debt from 2008 economic collapse, ..was kicked Down the road. ..is maturing now. It is retail Apocalypse now in USA, …over 5000 mainstream store closure Bankruptcy. … Trump is 1 % migrate thru the collapse. .. The level of deception is beyond. …beyond!

There is fake news…..and real news… America is bankrupt and scamming the public with Trump modified Obamacare To Banking interest rates. …USD dump of Treasuries. ..and inflation.

Are you crazy? The US is the most powerful country on earth. I was born in Syria. The US is power

I agree. I just hope its not his idea, and rather the dark forces doing these things on his behalf

They are pouring the Military into Syria While Erdogan and Netanyahu rush to Moscow for pledges that Putin will not interfere with Syria’s demise.

Basically. …Satan show up in God’s Throne room.. cut gas ….and mock Him

I don’t think Putin or Iran will let that happen

As far as I know, US intends to deploy a TaskForce to straddle the Euphrates mid-way Raqqa-Deir ez-Zour, probably from airborne elements already in country, but from 2 BCT/82 AbnDiv or US Marines I cannot speculate.

What do you mean straddle?

To also take a section of the Daesh road on the south side of the river. This is no small undertaking for sure. First the Marine fire base has to be set up.

I mean secure both sides of the river, probably at the narrowest point (200 meters) where I indicated, where SDF/YPG already reached the left bank

The Marines will establish a fire base close to Raqqa. Next step would have to be a bridge across the Euphrates I would guess. For logistics and supply.

Interesting how the US decided to get more involved now, after so many gains and victories by SAA/RUS recently

I’ve posted the Rand Map this forum and others. http://www.rand.org/pubs/perspectives/PE233.html

It’s requires some reading and notice of the map with International Administration zone.

The reason I asked if Trump would hand back Eastern Syria/Euphrates to Assad While Putin smiles,….is the end game moment here.

Israhell and Saudi have leveraged huge influence, …to simply accept Syria tied up In war for a while….then rebuild with everyone from Iran to China bidding out contracts.

My view of Trump is he is a vassal now of Deep State. …deep state is Zionist and Bankers System which is snake from before WW 2. When Palmyra fell…again. ..it was WTF are you doing Russia moment. On time….Palmyra recovery…still ongoing,…covered the gap between Obama and Trump. Russia and SAA secured nothing. ..except the shit hole named Aleppo which most of the citizens just accepted Takfiri kook Islam with no real rebellion.

Now that Trump is in….it’s Marine and Airborne occupation forces piling into Syria. For 2 years. …No Russian Airborne or Iranian forces in Syria. .. Big red flag. ….why no effort to secure Syria?

Maybe Trump will rescue Syria. ..get Caesar Laurel at UN,…and hand it all back to Assad…with Putin smiling.

Vegas odds for that are ???

which is why there should be at least 7000 Russian troops in Syria….

If they want to fight isis they should be sending these soldiers to Israel and Saudi Arabia.

The nature and pace of everything that’s happening in Syria right now is directly influenced by the UNSC Res. 2254 from December 2015, which states that a new constitution and election must be held under United Nations supervision within 18 months from that time. It also says that “all Syrians, including members of the diaspora” (refugees/immigrants), must be eligible to participate as well. Looking at the timeframe agreed to in the text, it’s clear that June 2017 is the deadline for this to happen. Furthermore, the document emphasizes “the sovereignty, independence, unity and territorial integrity of the Syrian Arab Republic”, meaning that none of the signatories – including the US – is officially in favor of the country’s de-jure dissolution. This clause is obviously subject to wide interpretation, since the Kurds argue that “federalization” still retains each of these four principles, while Damascus sees a unitary (non-“federalized”) state as the only solution and officially holds the position that “federalization” “directly threatens the integrity of our country, runs counter to the Constitution, contradicts the national concepts, even is at variance with the international resolutions and decisions.”