The US Department of State has denied information about the country’s supplies of weapons and military hardware to the Jabhat Fateh al-Sham terrorist group. The Russian side claims that the group in Aleppo still continues to receive military hardware from its Western backers. 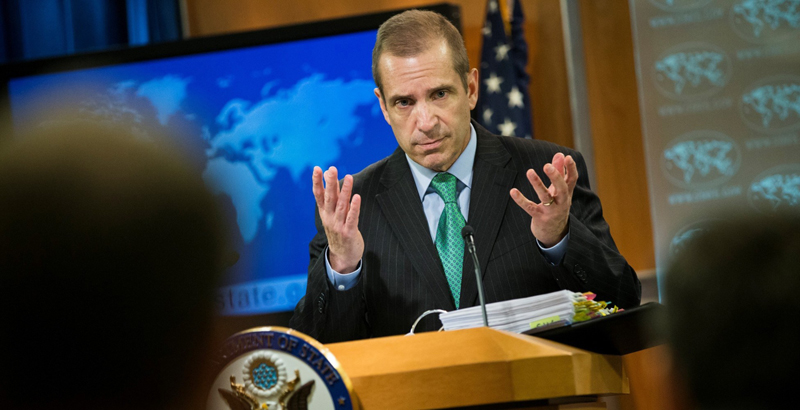 On Monday, the US Department of State has denied media reports that the Jabhat Fateh al-Sham (previously known as the Al-Nusra Front or the Jabhat al-Nusra) terrorist group received weapons from Washington.

“We have never provided any assistance to the Al-Nusra. We see it as an international terrorist organization, a branch of the Al-Qaeda, and will seek its destruction,” spokesman for the US Department of State Mark Toner said.

Earlier, a battlefield commander of the Jabhat Fateh al-Sham said in an interview with the Kölner Stadt-Anzeiger newspaper that the US supplied the group with the TOW antitank weapons systems, as well as provided terrorists with military advisers.

At the same time, Russia’s envoy to the UN Vitaly Churkin said, speaking at the Security Council that the Jabhat Fateh al-Sham in Aleppo still continues to receive military hardware from its Western backers.

“They are armed by tanks, APCs, field artillery, multiple rocket launchers… dozens and dozens of units, including heavy weaponry… Of course, they couldn’t have made this equipment themselves. All of this has been received by them and is still being shipped to them by generous Western backers, with the US, presumably, turning a blind eye,” Churkin said.

He also noted that the terrorist group and other groups, allied with it, use over 200,000 residents of Aleppo as a human shield, attacking residential areas in the city controlled by the Syrian forces.

According to Churkin, the main reason of the failure of humanitarian aid delivery to Aleppo is the terrorists. He also added that Moscow will no longer give concessions to the Syrian rebels, following requests from the US, since the ceasefire has not worked and has not had the desired result because some rebel groups were constantly violating ceasefire, despite Washington’s promise to keep them under control.

“The American side de facto signed that it was unable to influence the groups it sponsors and to deliver on the deal as it promised. First of all, to separate those groups from terrorists and mark their positions on the ground accordingly,” the Russia’s envoy said.

In accordance with the agreements, reached by Russia and the US on September 9, Washington agreed to take a number of actions in relation to the Jabhat Fateh al-Sham, in particular, to take action against the terrorist group in the case of violations of the ceasefire in the demilitarized zone, indicated in the agreement, as well as to develop a map of facilities of the Islamic State (IS) and the Jabhat Fateh al-Sham for further airstrikes.

However, the priority of the agreement was a delimitation of areas, controlled by the armed ‘moderate’ opposition, and areas, controlled by terrorists of the IS and the Jabhat Fateh al-Sham. Speaking to the UN Security Council, US Secretary of State John Kerry warned the opposition against an “unholy alliance” with the Al-Nusra Front, and said that he international community “will not turn a blind eye” to cooperation between the opposition and the terrorists.

At the same time, when the press asked Churkin if the Syrian peace talks between Moscow and Washington were “dead” after recent developments, he said: “I don’t think so… The situation is very difficult.”

“We made our position clear. We need a serious process without trickery, without people changing their demands every two days. We had an agreement and the only thing required was fulfilling it without changing stances,” he said.

However, he stressed that if the US “continues acting in the same manner, it will be difficult to have a serious peace process.”

Lying is hardly unusual for this individual.

I’d love to ask the Charlatan, how many times in the past 6 months has the U.S. bombed Al Nusra compared to ISIS? (Crickets)

We are constantly bragging about our bombing metrics against ISIS but we never mention Al Nusra or any Al Qaeda affiliated groups, I wonder why? http://www.defense.gov/News/Special-Reports/0814_Inherent-Resolve – slick presentation on ‘ISIL’ bombing campaign.

The U.S. has supplied advanced weapons to all terrorists throughout the war. In the summer of 2013, the Joint Chiefs of Staff instructed the Defense intelligence Agency (DIA) to conduct a highly classified study and render specific findings of fact. DIA concluded, inter alia, that the CIA program to ship plundered Libyan weapons into Syria had morphed into an indiscriminate pipeline supplying all terrorists–including ISIS and al Qaeda–with arms.

The U.S., which lost 3,000 killed by al Qaeda on 9-11, now trains, arms and gives diplomatic support to al Qaeda. If that is not treason, the word has lost all meaning.

[See Seymour Hersh, “Military to Military” and “The Red Line and the Rat Line,” in the London Review of Books.]

SF needs to correct this headline. It should say: “US Department of State Denies INFORMATION ON IT’S Supply of Weapons to Al-Nusra Terrorists”