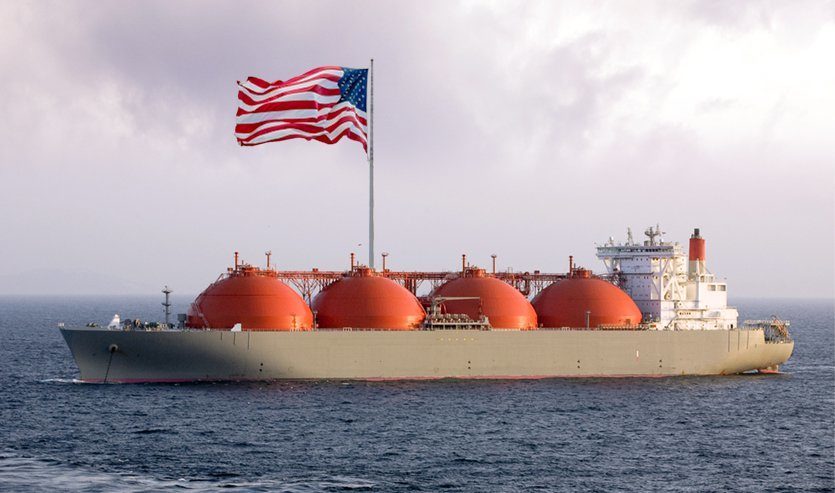 The US Department of Energy referred to its liquefied natural gas (LNG) as “freedom gas” in an official press release.

It was called that because it provided US allies “a diverse and affordable source of clean energy,” it further allegedly promotes job creation, and economic growth by approving additional exports of domestically produced natural gas from the Freeport LNG Terminal located on Quintana Island, Texas.

It, obviously, comes from Freeport and that is why it is also called “freedom gas.” It doesn’t come down to much speculation that the justification of the pretentious name came after it was thought of.

“Increasing export capacity from the Freeport LNG project is critical to spreading freedom gas throughout the world by giving America’s allies a diverse and affordable source of clean energy. Further, more exports of U.S. LNG to the world means more U.S. jobs and more domestic economic growth and cleaner air here at home and around the globe,” said U.S. Under Secretary of Energy Mark W. Menezes, who highlighted the approval at the Clean Energy Ministerial in Vancouver, Canada. “There’s no doubt today’s announcement furthers this Administration’s commitment to promoting energy security and diversity worldwide.”

Efforts were further made to “promote an efficient regulatory system that allows for molecules of US freedom to be exported to the world,” Assistant Secretary for Fossil Energy Steven Winberg said.

The spreading of this “freedom gas” is mostly done through continuous threat of sanctions that if “allies” prefer Russia, then they’re obviously no on the right side.

This is a recent trend, earlier in May US Energy Secretary Rick Perry referred to LNG as “freedom gas” while advertising LNG exports to Europe.

“Seventy-five years after liberating Europe from Nazi Germany occupation, the United States is again delivering a form of freedom to the European continent,” Perry said in Brussels, according to EURACTIV.com. “And rather than in the form of young American soldiers, it’s in the form of liquefied natural gas.”

Also, yes, Rick Perry, on behalf of the US, claimed all responsibility for liberating Europe from Nazi Germany.

It should also be reminded that “freedom gas” could also refer to freeing Europe from its money, since according to several reports Russian LNG is much cheaper than US one.

Of course, how dare those Russians blackmail the EU into purchasing cheaper gas and keeping them “prisoner.”

As of February, 2019, Russian Novatek was able to deliver LNG to Europe for $3.15 per million British thermal units (mmBtu) compared to $7-$8 for U.S. producers.

Gazprom reportedly expects a price of $6.4 per mmBtu, which is still lower than what the US producers want.

And this isn’t a recent development.

In November 2018, Gazprom reportedly signed a contract with India for the delivery of $7 per mmBtu, which is still between $1-2 cheaper than anything the US or Qatar offer. Thus, it appears that for the next 20 years India will also have to get its freedom in another way.

In May 2018, Russia’s Energy Minister Alexander Novak said that the US was really keen on Europe purchasing its LNG, but the price was still at least 30-40% higher than the one offered by the side not selling “molecules of freedom.”

Thus, it would appear that “freedom gas” might, in fact, be the one that actually allows you to purchase other things apart from it, but, then again, the US knows best.

Since, of course, each US ally has the “freedom” to purchase gas from whichever country it decides, as long as that country is the US.

LNG gas and fossil fuels will be banned soon due to climate change.

Uranium reactors are better than gas, coal and fossil fuels power plants. At the moment engineers are working on design of fusion reactors. When they succeed then they will produce in mass.

Fusion reactors may be a long ways off. In theory you have to input a huge amount of energy to create and control the plasma reaction. Which is at tremendous temperature and pressure.

This is true but I hope one day they will find out the solution.

The age of gas is also fast coming to a close out in 70% of markets. The age of direct solar energy is here backed by the indirect solar energy ‘wind’ power. The very best way for any Nation to regain their nationhood and independence, is to become totally self reliant. Green renewable energy is the way to go for everyone. No need to ship oil anywhere ever again and no need for gas. Each nation has enough oil in the ground on their own for basic petroleum products such as windshield-wipers (which can also be made from silicon instead.

A great website on how the world is being electrified today, pleas visit: https://electrek.co/

SOLAR (not wind) with a good-paced R and D trajectory, maybe in 20-50 years, but NG is very good for fluctuating demand based upon its physical aspects…it will still be in some demand.

Currently it takes 7 years for a solar panel to produce the energy that went into making it. Most solar panels fail in under 10 years.

Solar is great for electrical independence, but it’s only marginally less polluting than natural gas if you look at the complete life cycle.

Its the same with battery cars as well.

There will certainly be a demand for Flat Battery Syndrome assistance with fast charge capability I think. :)

How about a company logo such as ‘ We charge, you go’

Thermal plants are needed because they can be throttleded, according to demand.

The only “green” way to do so is with hydro electric dams.

I’ve worked on dams before. Its neat stuff!

Freedom gas what a joke – they are threatening sanctions on Nord Stream 2 to pressure Europe to buy it.

Not only is freedom not free, it is very expensive.

I just hope that Tommy “LOLZ” Jensen here on SF was able to copyright the term “freedom gas” as it was he who actually coined by him, along with other such terms as “Russian gas prison”

Full of freed methane in DC as it is.

The Americans are truly pathetic. Off topic but for as long as I can remember boots made from sheepskin with the wool still attached have been called ugg boots. But now we aren’t allowed to call them ugg boots, because an American company has copyrighted the name. And they have the audacity to accuse China of intellectual property theft.

GO USA GO its time to boycott all that is Russian or Chinese ..

Enjoy living in an empty house if you boycott all chinese.

Great many major US manufacturing concerns use Chinese sourced components – US companies actively chose to move to off-shore labor and production to increase their profit margins. Did you type your comment on a smart phone, tablet or laptop? Take a guess where the internal components, if not the whole device, were manufactured. Simpleton.

I thought you Canadians prided yourself on not being Americans, and proving to the world that you’re different. Shouting go America sounds suspiciously…. American.

Dumbass, your Americunt masters are going into recession.

Better descriptions’ of the US gas would be ‘ Shyster gas, Mafia gas or Shoah gas’ I think.

Shoah gas would of course be a hard sell in Germany, but the Germans should just pay up and shut up:)

Trump in fact is the best thing that has happened to the world for decades. This is because the US Carpet Bagging is now totally exposed for all to observe, and the world can no longer pretend not to see the Mafia regime that is the USA.

At $7-8, Europe will be freed of some excess Euros. Mafia methane sounds good. :)

Except all US vassals just cling to the hope that once Trump gets replaced by a Democrat everything will return back to normal. Just like during G.W. Bush. Except just ike after Bush things will not return back to normal. The Bush practices become the new normal. Torture continued, drone strikes continues, invasions continued. But at least the Democrats pretend to listen to their vassals, before doing the exact same things. We can expect the exact same things to continue with a Democrat successor to Trump. Only he will smile more towards his vassals and give them a pat on the back for good behavior. As long as they do as they are told and buy America’s Freedom gas.

The latest US gas boondoggle is similar to the old and current US weapons sales boondoggle.

All vassal states must buy US shit at double the price , or face unilateral US sanctions :)

Just like the abused spouse has to put up with ever increasing levels of abuse in order to be rewarded with the occasional bouts of niceness.

Fewer and fewer spouses of either gender will accept that sort of abuse these days though, especially in the Western ‘households’.

Noone HAS to put up with that sort of shit. Unless one is chained in a dungeon or with debt.

Americunts are full of hot air, need I say more :)

Freedom Gas – sounds like a euphemism for a fart.

Remember freedom fries? The guy whp came up with, a Congressman, came to bitterly regret making up that name and supporting the invasion of Iraq. Becoming a bitter opponent of that war, and all other US wars since. As a result he became a pariah in the US Congress, being shunned by most of his colleagues until he recently died.

Ah, the price of freedom. They should rename their highest per capita corporate prison system Freedom Jail. George Orwell’s dream come true. I like the more succinct tag, fart. When will the world be done with paying for the Oligarch’s freedom by surrendering our own?