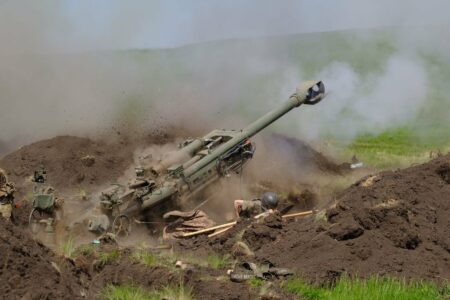 Ukrainian service members firing a M777 howitzer on an unspecified front in the Donbass region. Source: the Ukrainian Ministry of Defense.

US artillery supplies include:

According to the Transport Command of the US Armed Forces, Kiev received:

Heavy transport aircraft, including both military and those chartered by the Pentagon were involved to deliver weapons to the war-torn country. In total, they made 878 flights to Europe. 48 ships and 4,000 trailers were also involved.

10th month of war and still not the main railroads, railstations, airfields, ports and highways in western ukraine destroyed? why? the ongoing massive support by western armament, ammo and supplies is the main reason why this war is not over, will go on and is far away from a russian victory.

Russian army itself relies heavily on railroad, but yeah it least Lvov area should be bombed to shit

Well done USA! And ammo with it. War will not stop in the winter

Care to Share the Proof? A single One? You are a meme boi the biggest SF joke lmao. Love your tears 😘

All himars were destroyed, they told it in telegram

How does it feeel?

All delivred whit the personel to operate this killerstuf. Time to cut the delivery chanals, in the air, on the seas and by land !!! Is there more proof neded that WW3 has started in mini version. Time to send spotters who will send coordinates off the delivery places, and then KABOOOOM bey bey yankees.

US is murder inc. and war is their primary racket racket.

meanwhile in Seattle people are living out in the cold.

Let the demoncrats reap what they sow

You wait 4 days to have a result of an election…. On the third day, like a pokemon, a wild magic ballots package suddenly appears and the democrats wins. DEMOCRACY BITCH !!!

Both the mayor of Seattle and Portland are shitheads and should be blamed for the terrible state of their cities.

Russia should hack every single company that sends arms to ukraine and then make every single detail of their weapons open to the public so that competing companys and nations the west does not like (iran and china) can copy the hell out of it and then sell it cheaper on the world market.

Only ecomomic pain will hurt those people nothing else.

USA is the worst human farm
Reply to  kotromanic

A bullet to their heads, even better…

kotromanic
Reply to  USA is the worst human farm

If russia does not want to put a bullet to the head of Ze why would they want to do this to the CEO’s of Arms Companys. The hacking can be done by private organisations and russia has plausible deniability.

Hurting the arms industry hurt the money of the owners. Killing one manager does not hurt anyone, since there are millions who are waiting for their opportunity to get rich.

Yes, the Novorussian militias have been using the stuff captured from the failed Ukrainian puppets for some time now to kill Banderpites.

Where is Clyde?
Reply to  Clyde

Can you enlight us all where exactly are the borders of novarossya? 🤣

TomB
Reply to  Where is Clyde?

Lugansk, Donezk and Odessa with a link to Transnistria. Thats the goal for till next summer

NATO is laughing at you
Reply to  TomB

War
Reply to  NATO is laughing at you

To all the Ukrainecucks, out there, this is proof that Russia is basically at war with the U.S by proxy, this isn’t Ukraine Russia is fighting anymore.

Media outlets have now stated that the U.S has spent around 100 billion on Ukraine thus far, that’s crazy, the american people should be livid over such a waste of money.

Soon their armouries will resemble their drug store shelves. empty

and what did russia say? ” we destroy more than 250 artillery systems”