The US is going to continue to increase its military presence in the Asia-Pacific region due to concern about China’s military building up there. 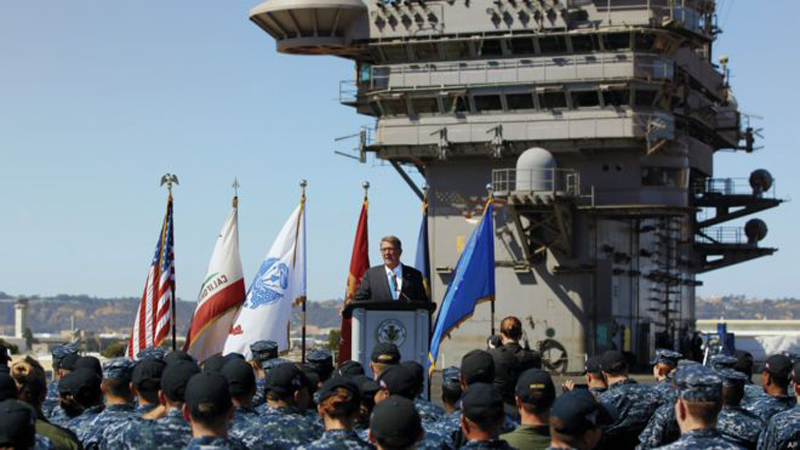 US Defense Secretary Ashton Carter speaks to sailors on the USS Carl Vinson in San Diego on September 29, 2016 (Photo: AP)

The US is going to sharpen its military edge in the Asia-Pacific region in connection with growing concern about China’s military building up there, US Defense Secretary Ashton Carter said on Thursday.

“The United States will continue to sharpen our military edge so we remain the most powerful military in the region and the security partner of choice,” Carter said.

The statement was made in order to appease allies in the region, worried about China’s actions in the Pacific.

Beijing was criticized by the US Defense Secretary for building artificial islands in the disputed areas of the South China Sea, as well as was accused of ‘aggressive behavior’ toward the regional countries.

“Beijing sometimes appears to want to pick and choose which principles it wants to benefit from and which it prefers to try to undercut,” Carter said. “For example, the universal right to freedom of navigation that allows China’s ships and aircraft to transit safely and peacefully is the same right that Beijing criticizes other countries for exercising in the region,” he added.

According to Carter, the policy of shifting of more military and economic resources to Asia-Pacific region, after years of heavy engagement in the Middle East, is the next phase of the US pivot to Asia. He also noted that “tremendous potential” for the US and its allies in “the most consequential region for America’s future” would be unlocked by the Asia-Pacific rebalance.

On Friday, Carter will meet with his counterparts from 10 states of the Association of Southeast Asian Nations (ASEAN) in Hawaii during a security summit. The US is not a member of the ASEAN, but tries to use it to develop a security partnership, as well as to curb China’s growing influence in the region.

There’s that idiot As-Carter trying to start a war no one will survive. Ash is suicidal but too much of a coward to go it alone.