US Defense Secretary James Mattis is going to brief US President Donald Trump on military options against Syria in connection with an alleged chemical attack in the Syrian town of Khan-Shaykhun. 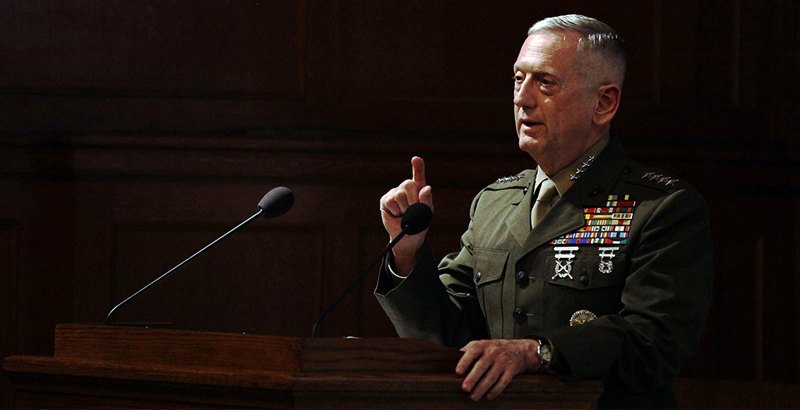 Earlier, the CNN TV-channel reported citing its own unnamed sources that Trump told some members of the US Congress that he was considering a possibility of a military response to a chemical attack in the Syrian province Idlib. However, CNN ctressed that the US President still has not taken a decision.

At a news conference on Wednesday, Trump said that Syrian President Bashar al-Assad and his government have gone “beyond a red line” with their chemical attack “against innocent people including women, small children, and even beautiful little babies.” He also noted that “it is now my responsibility,” without indicating what actions he would consider. When the US President was asked whether he was formulating a new policy on Syria, he answered: “You’ll see.”

Also on Wednesday, US ambassador to the UN Nikki Haley condemned the UN and threatened that the US could take its “own” action if the UN Security Council failed to act on the alleged chemical attack in Khan Shaykhun town in the Syrian province of Idlib.

“When the United Nations consistently fails in its duty to act collectively, there are times in the life of states that we are compelled to take our own action,” Haley said. “For the sake of the victims, I hope the rest of the council is finally willing to do the same.”

On Thursday, Turkish Justice Minister announced that autopsy results on the victims of the attack had confirmed the fact of the chemical weapon usage in the alleged chemical attack in Khan-Shaykhun. Later, Turkish officials said that the attack had likely been carried out with the deadly nerve agent sarin.

According to former Congressman Ron Paul, the chemical weapons attack in Khan Sheikhoun that killed 30 children and has led to calls for the Trump administration to intervene in Syria could have been a false flag attack.

Pointing out that the prospect of peace in Syria was moving closer before the attack, with ISIS and Al-Qaeda on the run, Paul said the attack made no sense.

“It looks like maybe somebody didn’t like that so there had to be an episode,” said Paul, asking, “who benefits?”

“It doesn’t make any sense for Assad under these conditions to all of a sudden use poison gases – I think there’s zero chance he would have done this deliberately,” said Paul.

The former Congressman went on to explain how the incident was clearly being exploited by neo-cons and the deep state to enlist support for war.

“It’s the neo-conservatives who are benefiting tremendously from this because it’s derailed the progress that has already been made moving toward a more peaceful settlement in Syria,” said Paul.

Well put by Mr Paul. He’s right on target too. Make the public fearful, try to make the opposing faction intimidated and then push for a “solution” that’s beneficial to the neocon/ zionist/ saud wahabi allied factions. Thanks for posting it as you did. The line spaces help make it easier to read.

Ok, US, take unilateral action, when pushed came to shove after the Deir Ezzor incident last year, you blinked. You are going to blink again, unless you want to embarrass yourself with cruise missiles that are 3 decades old, and the stealth farce.

some medias are reporting that Trump has denied he is discussing military options over Syria, and that he will bring up the subject when he will speak with Putin.

I think the media is pressuring him to do something along the neocon agenda.

that’s for sure. Also, “getting briefed” about military options means getting informed on what courses of action can be taken,not taking them. Of course for western medias that means start bombing, as there are already folks naming the ships which will launch cruise strikes.

Hows that crow taste? Those three decade old cruise missiles all 59 made it past the spiffy s400?

Yeah, I can see Trump doing an Israeli style attack on Assad’s military since the Israelis have been doing it for years. The Neocons are right, appeasement doesn’t work; you cannot appease the Neocons they do take it as a sign of weakness.

So how many Syrian 19yr olds is Russia willing to see butchered to Tomahawk Cruise missiles without firing a single S300 in their defense? Next stop for the Neocon train, Eastern Ukraine and Crimea.

Does Assad have a palace in Damascus, if he does then I can see Trump hitting that. It has great symbolic value.

americans have balls. russians have not:

Americans can exercise the veracity of their balls when having significant advantage against an enemy that is defeated and in disarray. I would like to see their balls if they decide to take ISIS to street to street fighting. US has no place to relocate ISIS anymore, in order to claim a quick.

you can see this in mosul. bro, americans did this in italy and on western front. they are good in battles in towns. also in iraq had no problem.

i do not like american policy, but also i do not understand people, who underestimate the us army.

ah, now i see, you are bloody communist jesus :)) then is everything is clear for me ;)

You are correct in your posts, just the wrong crowd. As much as they point out the double standard in US policies they simply cant be objective on anything related to the USA and do not see there own double standards. The US is very good at fighting wars, very good. They get boat loads of practice. Truth is very few should have ever been fought, just like the US should not be in Syria now. The only way to make the USA see this is when the price paid in those wars starts to rise, fools mistake this for the US not willing to take casualties. Truth is its the US population that says this stupid fight isnt worth it, we have no reason to be in it and forces the US out. Anyone who would underestimate the US military is simply kidding themselves, all they need do when they imagine it being crushed, is think in their minds where does that defeat take place?? Idaho? No way in hell, its in the South China sea the Ukraine or Syria, that tells you who has the greater power.

Lol sure, a lone ISIS ‘commander’ doing nothing in the middle of nowhere ambushed by “SWAT” (?!), because the US army don’t have drones and airplanes anymore… maybe it was their buddy al Baghdadi – they really need to evacuate him soon. p.s. “The airborne attack lasted 30 minutes as the SWAT team engaged in a firefight with a lone ISIS jeep” And they need 30minutes to kill 3-4 people? Did they even kill them? No one knows.

Dunno about their balls, these lies have no brain…. Hey maybe they’ll make a movie about this heroic action!

Yeah sure, a lone “ISIS commander” doing nothing in the middle of nowhere, ambushed by “SWAT ” (?!) because the US army don’t have have drones and airplanes anymore… instead they use american police forces against ISIS in Syria!

“The airborne attack lasted 30 minutes as the SWAT team engaged in a firefight with a lone ISIS jeep” And they need 30minutes to kiII 3-4 people? Did they even kill them? No one knows. Dunno about their baIIs, but these liars don’t have brain….

p.s. maybe it was their buddy al Baghdadi – they really need to evacuate him soon lol

boy, americans use the choppers. they used paratroopers for taking tabqa and used also now. the russian are sleeping.

Russians do have balls it’s Putin that doesn’t

i hope russia kicks US ass

The neocon train is trying to get some traction, it is not moving; it is stuck, the media is trying to stir the pot with other political whores, not any different than the nonesense about Russia affecting election results in the US elections.

US WAS NOT EVEN ATTACKED!!! NO AMERICANS DIED ! THIS IS SUCH BULLSHIT! US just shrugs it off when they “accidentally” kill hundreds of civilians in bombing runs, but when chemicals are used, OHHHH WE MUST DO SOMETHING!

Double standard. Not even enough for the US. They invented the triple standard.

It’s all speculation. For any who think 911 was not done by the US government Israel and Saudi Arabia this should answer any doubts taking Al Cia Da’s word on a chemical attack with no proof and willing to risk a nuclear war for Al Cia Da the supposed enemy of the US government. I would recommend Russia disclose privately at first and then publically if necessary that it has tactical Nukes with its forces there in Syria, no threatening just stating facts, so everyone will understand what these general Dr. Strange love types and Israel are pushing for

to turn the entire planet into an Israhell. These Jewish Neocons as almost all of them are, are chicken hawks and very happy to see Goyim killing Goyim for the benefit of Jews until only Jews are left. As long as the Neocons really Jewish Neo Nazis just look at Ukraine, believe they won’t suffer the consequences of their murderous actions they will be aggressive. Make sure they are the first to die in any war they want to start and there will be instant peace. or this video is showing what we will have before the summer. Nuclear War https://www.youtube.com/watch?v=LkaWbiVp-io

what movie is that? it rensembles “The day after” from the 80ies but seems newer?

9/11 changed the world by the perp elites (new word ‘perpelites’) demonstrating that they can kill their own at will and blame it on anyone they like. They are saying, “The masses will believe anything we want them to believe and if not they will continue to believe they cannot do anything about it anyway.”

same false flag operation und propaganda as we had in history already before the war against Hussain. I fear the most bad worse. They do all to get internatinal political support for their clash.

Will any sane minds in the US put reality before fantasy ? Its sadly a 50/50 chance.

US histrionics will be the death of America in a nuclear war with Russia :)

“On Thursday, Turkish Justice Minister announced that autopsy results on the victims of the attack had confirmed the fact of the chemical weapon usage in the alleged chemical attack in Khan-Shaykhun. Later, Turkish officials said that the attack had likely been carried out with the deadly nerve agent sarin.”

Since when was Turkey conducting autopsies on Syrian bodies? And so quickly too.

The so called ‘red line’ was crossed by the US long ago. This is a repeat of Libya and Iraq but this time hopefully Russia, Iran and China will put a stop to it. Main threat to the US/NATO is Russia hence Tillerson’s visit and China to the US. Looks like the US wants Russia and China to stand aside. We will now see what Russia and China are made of, they either stand by International Law and support Syrian sovereignty or they will fall over.