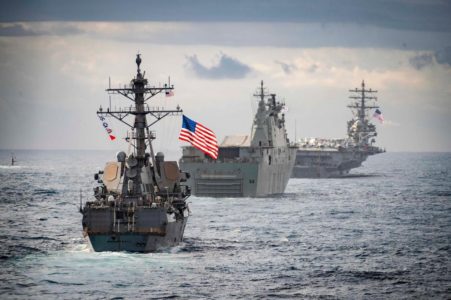 One of Australia’s two Canberra Class LHDs conducting exercises with a U.S. Navy Arleigh Burke Class DDG and Nimitz Class CVN. Although possible, it is hard to image Australia committing significant naval assets to a U.S. strike against China. Australia has far too much to lose and little to gain from such a scenario.

Tensions escalate as US sends two warships to the region.

Last Thursday, the flagship of the US 6th Fleet, USS Mount Whitney, entered the Black Sea as NATO forces prepared for large-scale military exercises in the Mediterranean. USS Mount Whitney joined the guided missile destroyer USS Porter that was already present in the area to conduct a “routine patrol” – over 8,000km away from the North American continent.

Later, the Russian frigate Admiral Essen conducted exercises simulating a response to an enemy air attack. The Russian fleet said in a statement that “during the exercises, the [Admiral Essen] frigate’s air defense team fixed the targets in their crosshairs and destroyed them by firing anti-aircraft missiles.” The exercise was a clear demonstration that Russia is fully prepared to defend its sovereignty in the Black Sea. This was perfectly encapsulated by an image of what appears to be the Admiral Essen frigate monitoring the actions of USS Porter, USS Mount Whitney and Bulgaria’s BGS Gordi in the Black Sea.

The Russian warship is one of the three frigates from Project 11356 that is operating in the Black Sea. The ships in this series have a displacement of about 4,000 tons, a speed of 30 knots and an autonomy of 30 days. Admiral Essen is equipped with Kalibr cruise missiles, the Shtil-1 anti-aircraft defense system and 100mm caliber artillery batteries, among other things. In short, by using the Admiral Essen frigate, Russia is sending a powerful message to NATO that it is taking the defense of its maritime space seriously, especially since the June debacle of Britain’s HMS Defender is still fresh in the memory.

Russia has repeatedly warned NATO that the bloc’s growing activity near Russian waters could result in unwanted incidences. By sending warships to the Black Sea, Washington is not contributing to stability in the region. On the contrary, the US is trying to push regional Black Sea countries, such as Bulgaria and Georgia, towards confrontational policies against Moscow.

Washington wants the global community to get used to the idea that the Black Sea is in its sphere of influence. Due to the US’ attempts to assert its authority over the Black Sea, the location of several Russian ice-free ports and the country’s only direct access to the Mediterranean Sea, ​​tensions are developing.

Russia already demonstrated its resolve in defending its sovereign territory when HMS Defender was humiliated after attempting to violate Russian maritime space. Knowing that Russia takes its security seriously, Washington is provoking tensions between two nuclear powers. There is an impression that the US is providing psychological support to Ukraine and other peripheral NATO partners like Georgia. However, as was demonstrated during the 2008 South Ossetia War and the 2014 Donbass War, the US is willing to embolden and encourage these countries into wars that will involve Russia, but leave them abandoned and isolated when faced against the Russian military.

Due to this escalation, Russia needed to respond in one way or another, and its latest exercise in the Black Sea aligned with the rare entrance of multiple US warships in the Black Sea. By responding in such a way, even if it was an accidental alignment, the US and its NATO allies will always need to consider what the Russian response will be if the Atlantic bloc decides to engage in hostilities.

Despite Britain’s humiliation in June, US-led NATO forces have evidently not given up their challenges against Russia at sea. It is recalled that in October, the US Navy destroyer USS Chafee tried to violate Russia’s national border in the Sea of ​​Japan, but was forced to withdraw under pressure from Russia’s large anti-submarine ship Admiral Tributs. Although the US is undoubtedly pulling its resources to focus on opposing China in the Pacific region, it does not mean that the US has completely withdrawn from challenging Russia elsewhere. In fact, by sending USS Mount Whitney and USS Porter to the Black Sea simultaneously, the US has only escalated tensions and made its intentions clear.

Can you imagine the uproar if Russia or China was doing this off the US coast? If only Russia could take out the US politicians and their paymasters … I’m sure most US citizens would be as grateful as the rest of the world. TEP.

SHUT. THE FUCK. UP. Why the fuck would they let a danish suspiciously behaving illiterate inside east Berlin at the height of the cold war? I also suspect your dementia is at least as severe as with Joe Brandon, as if you fucking remember what was 50+ years ago. It’s just one of your russophobic fever dreams again, no wonder when you’ve taken the third clotshot already.

US thugs need a bitch slap

Russia needs to act more firmly as so far its passive groveling has only emboldened the US warmongers. Just sinking or damaging a US rust bucket by “unknown drone” will do the trick.

sua is not a nation, it is a bunch of parasites. Until these parasites are exterminated, there will be no peace on earth

Would be nice to see the US globalist proxy ships get their electronics fried like the Russians did with the Cook. But of course the US are cowards and won’t dare to repeat this embarrassment by violating Russia’s territorial waters.