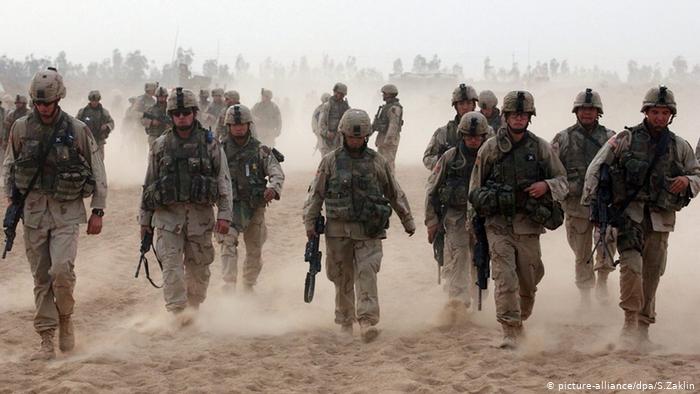 On May 25th, US President Donald Trump said that a “relatively small number of troops” – 1,500 – would be sent to the Middle East, in case of a further breakdown of relations with Iran.

Before departing with the Marine One, he said the following:

“Q    Mr. President, what message do you want to send to military families who are concerned about you sending troops to the Middle East?

THE PRESIDENT:  Well, I think it’s going to be very good in the Middle East.  Iran has been a — as you know, they stage terror all over the world.  They’re a much different country now than when I first got here.  When I first got here, they were at 14 different locations, fighting.  Right now, they don’t — I don’t think Iran wants to fight.  And I certainly don’t think they want to fight with us.”

He also once more criticized the Nuclear Deal signed under the Obama administration:

The deployments announced Friday include a squadron of 12 fighter jets, manned and unmanned surveillance aircraft, and a number of military engineers.

“Australia continues to urge Iran to exercise restraint and to comply with its commitments,” she said. “The nuclear non-proliferation objectives of the joint comprehensive plan of action are worthy and serve the best interests of peace, stability and regional security. Australia strongly supports these objectives and encourages parties to the plan to redouble their efforts to honour its provisions.”

The Trump administration declared an emergency to bypass Congress, citing the need to deter what it called “the malign influence” of Iran throughout the Middle East.

“These sales will support our allies, enhance Middle East stability, and help these nations to deter and defend themselves from the Islamic Republic of Iran,” Pompeo said.

Pompeo said that he “determined that an emergency exists, which requires the immediate sale of the defense articles and defense services” to Saudi Arabia, the UAE and Jordan “in order to deter further the malign influence of the Government of Iran throughout the Middle East region,” according to a copy obtained by CNN.

The Iranian side provided several responses.

“We believe rational Americans and their experienced commanders will not let their radical elements lead them into a situation from which it would be very difficult to get out, and that is why they will not enter a war,” Seifi said, an assistant to Iran’s army chief, told the country’s semi-official news agency Mehr.

“If they commit the slightest stupidity, we will send these ships to the bottom of the sea along with their crew and planes using two missiles or two new secret weapons.”

Iranian foreign minister Mohammad Javad Zarif, spoke to Iran’s state outlet IRNA, saying that Iran wants peace and the US should do everything it can to put an end to the situation.

“Our message and preference is quite clear. We are interested in peaceful prosperous life. This is the choice of Islamic Republic of Iran, but the peace and prosperity should be provided to all,” the diplomat said.

“The US should put an end to this situation, and the rest of the world should be aware that if they want to enjoy peace, they should make sure that the Iranian people are benefiting under the nuclear deal,” Zarif said.

Rear Admiral Ali Fadavi, a senior commander of the Iranian Revolutionary Guards Corps said that “Everything north of the Strait of Hormuz is under our control.”

“American battleships in the region are under the complete control of Iran’s army and the Revolutionary Guards,” Fadavi told Fars News agency.

According to him, the US was weaker than ever in the region.

“The Americans have been present in the region since 1833 and they are currently at the weakest state throughout the history of their presence in West Asia, and have the minimum number of warships in the Persian Gulf,” Fadavi said.

On May 26th, Iran dismissed taking parts in any direct and indirect talks with the US and said that there wouldn’t be any.

The Iranian diplomat emphasized, “The Islamic Republic of Iran is ready to establish balanced and constructive relations with all countries in the Persian Gulf region based on mutual respect and interests.”

“Imposing sanctions on Iran is a failed experience, which has been repeatedly tested in the past,” the Iranian diplomat said.

“There are no direct or indirect talks between Iran and the US,” Moussavi said.

It should be reminded that just days earlier US Acting Secretary of Defense Patrick Shanahan said that the threat of Iranian attacks on Americans was “defeated.”

That map says it all.

and look how many targets iran has to destroy if the americans make the wrong move the first few hours of the conflict. As they say repeatedly are nothing but targets.

THE ONLY TERRORISTS IN THE WORLD ARE:

CHOP’M FILTHY HEADCHOPPER-LOVERS UP….! WAR IS A GOOD WAY TO CLEAN UP SHIT

of course the war machine is anxious to get the war started – zillion of bucks to make and even if Iran will be a hard nut to crack, it will be worth it considering the vast profits to be made and moreover it mostly will be Iranians that dies and not so many body-bags being sent home. what can be better. that’s the pro. the con is the 250 bucks per barrel of crude and dunny the dunce’s reelection campaign but from the deep states point of view he’s replaceable since after all he’s been unwilling to go to war threatening to withdraw troops und zu weiter. Bidén is a better subject so watch out for the war machine’s donations to bidén’s PACs. they might be huge. like Hillary’s last time around.

If you provoke them trumpet I dont think they have absolutely no problem kicking your ass, but I think you wanted to say that you dont want to fight Iran not the other way around. As long they humor you as the NK was when you was sending your famous twitters and the world was laughing at you nothing to worry you are safe.

The US buildup is continue in Mideast. Saudi regime is completely in control of Jewish terrorists.

Warning: The US troops in Mideast wearing X-ray glasses to record nude images of Saudis women and gents. The Saudi regime have no shame but Saudi women should take care.

Avoide US and US Dollar both are haram. Buying or selling with US dollar is also haram because that will make you losers in long run.

“The Most Destructive Breach In History”: Hackers Use NSA Code To Grind Baltimore To A Halt https://www.zerohedge.com/news/2019-05-27/most-destructive-breach-history-hackers-use-nsa-code-grind-baltimore-halt

One of the Roman emperors did the same thing, kept the army busy outside of Rome?