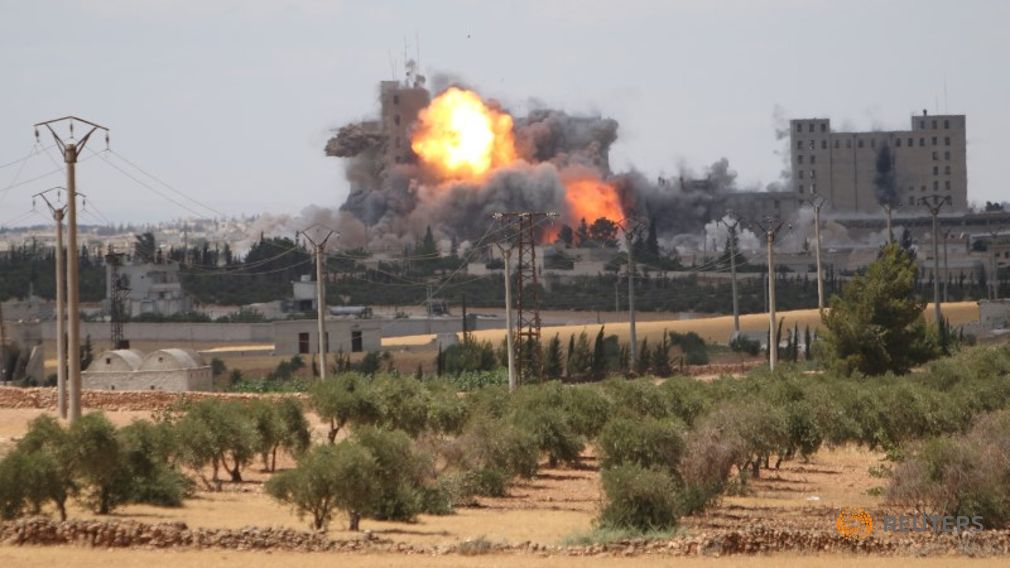 As expected, the first US-backed assault of a large Syrian city, Manbij, has turned into a “bloody meat grinder” that has been lasting already for 2 months. The US-led coalition launches mass airstrikes on residential areas and infrastructure, which have already led to the deaths of hundreds of civilians that was confirmed officially. Unofficially, the number of dead is likely to have exceeded up to one thousand. However, the US is not going to pause airstrikes in Syria.

At least 12 airstrikes has been launched by the US since the destruction in the village of Tokkhar. According to Syrian activists, at least 73 and as many as 125 civilians have been killed in contested northern city that has been hit in US-led effort against ISIS. The UK-based group AirWars, which tracks the airstrikes, provided the names of approximately 73 people, grouped by their families, whom local reporting indicated were dead in the airstrikes. Its tally of the dead ranges from 73 civilians to 203. The president of the Syrian National Coalition, Anas Alabdah, has called on the US to suspend its airstrikes until it performs a thorough investigation into the attack near Manbij.

However, when Army Colonel Christopher Garver, chief spokesman for the US military command in Iraq and Syria, was asked by the Guardian newspaper if the military will pause airstrikes, he replied: “No. Operations continue against Daesh.”

According to Garver, any civilian deaths might have been attributable to ISIS placing noncombatants into the line of fire as human shields or “mixed in or among the Daesh fighters”. He also said that the US did not have a clear picture on the civilian death toll and called “kind of a wild speculation toward 73” dead civilians in the press.

Anas Alabdah said that more strikes at the moment will drive Syrians “further into a spiral of despair and, more importantly, will prove to be a recruitment tool for terrorist organizations.”

The antagonism between the locals and the Kurdish YPG units (main striking power of the US-backed Syrian Democratic Forces) has led to a sharp increase of the ISIS support during the assault of the city and heavy fighting for Manbij, despite the US-backed SDF has a clear advantage in the manpower, military equipment and air power during the operation.

The US military said that they did not expect the city assault will last for so long time.

“The fight in Manbij is different than what we’ve seen in Fallujah, what we’ve seen in Ramadi, and what we’ve seen in some of the small towns in Qayyarah,” Garver said in a Friday briefing. “As Daesh falls back in, this is a fight like we haven’t seen before, and one that could be a tough fight and take a while longer to clear everything out,” the chief spokesman for the US military command added.

ISIS has recently rejected another offer to leave the city. Most likely, at the time when Manbij will be “taken”, the little will remain of the city. The destruction is enormous.

This once again demonstrates the practical restrictions on the use of Kurdish units supported by the US in any “anti-terrorist” operations across Syria. Moreover, Kurds have their own interest that is not always associated with the fight against “terrorists”. The Kurdish political leadership pursue to set an autonomy or even an indipendent state in northern Syria. The goal that the Arab Syrian population does not support.

Enough with the anti-U.S. bias – daesh is killing civilians and placing the bodies where airstrikes took place.

Carol Davidek-Waller
Reply to  enemies R among us

That doesn’t change the fact that the US chooses to bomb densely populated civilian areas repeatedly. While the Syrian Air Force and the Russians carefully select their targets as military and infrastructure. The Americans just don’t care. Their mission is not to help the Syrian people but to help themselves. That should be apparent to anyone.

sepheronx
Reply to  enemies R among us

Then why is the US media always trying to condemn Russia for supposedly bombing civilian targets? What is good for the goose is good for the gander. In other words, they open themselves up to this hate and deserve it.

But you are right. I think US should bomb whomever, right? I bet there is a wedding somewhere they can bomb. A few hospitals, mosques, schools, etc. All open targets.

Americans are such idiots. They’re gov’mint has been hijacked by insane people.