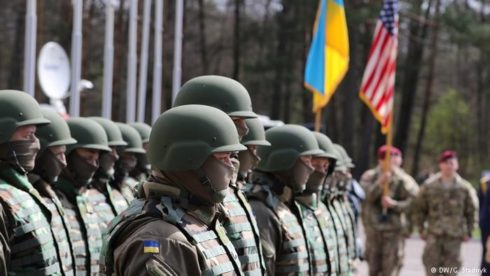 President of US think tank does not agree with unthoughtful wasting of billions of dollars.

While the Democratic government has shown more interest in funding Zelensky’s war plans than in defending American interests, conservative Republicans have shown an increasing antipathy to sending money and weapons to Kiev. Recently, the leader of an important think tank spoke out expressing skepticism about the effectiveness of US aid to Ukraine, calling it a kind of “game”. Indeed, this tends to become the broader opinion of the American people itself.

Kevin Roberts, president of the Heritage Foundation, an American well-known conservative think tank based in Washington, D.C., said May 13 he is against sending to the Ukrainian government the 40 billion dollars package that was currently being debated in Congress. According to him, such “aid” would be an ineffective way to deter Russia: “A strong America is the ultimate deterrence to Russia — and to China (…) It’s also the top moral responsibility of our elected leaders. What will not deter Russia is a typical Washington game of using people in crisis to rush a $40 billion package that hasn’t been vetted or debated”.

Later, during an interview to Fox News, Roberts explained in more details what his think tank’s position on the possibility of helping Kiev is. For him, there are other more efficient ways to do this than sending money from American payers: “[We must ask] what is in the best interest of the American people (…) The Heritage Foundation supports helping Ukrainians, especially if there’s been a full analysis by Congress using its committee structure and its custom of debates to actually have that conversation (…) At the same time we’re having that analysis we ought to be weighing priorities and Congress is really broken on how it goes about spending the money of the American people (…) It’s in the interest of America to stop Vladimir Putin. But it’s not in the interest of America to continue spending money we don’t have. That is the source of inflation”.

In fact, Roberts’ words do not sound like a mere personal opinion but seem to reflect a common thought among Republicans. The bill he refers to has passed the House in the second week of May by 368 votes to 57. All these 57 votes against the measure were cast by Republican lawmakers. Their main argument is very similar to that of Roberts and his group: it is necessary to discuss in depth where to allocate the money of American payers, thinking about what is best for them. Many Republicans argue that this amount could be used to control rising inflation and stimulate public investment, which would directly benefit citizens, rather than just helping a foreign government on another continent.

Meanwhile Republican Congressman Matt Gaetz in his commentary to CNS News said it is absolutely useless to provide the Kiev regime with a huge $40 billion worth of military assistance as the Ukrainian officials will steal it anyway. “They are ready to send billions to Kiev and fill the pockets of corrupt functionaries,” the politician said. Gaets also accused supporters of helping the Ukrainian Nazis: “I suspect that several in this body won’t need  a vote or a discussion because their real goal is regime change in Russia, not defense of Ukraine.”

Republicans do not adopt a “pro-Russia” stance, as the pro-Democrat American media irresponsibly accuses. Their only intention is to think of realistically consistent ways to support Kiev without harming the living conditions of the American people by spending money that the state needs. Also, while national investment projects are extremely time-consuming and bureaucratic, with extensive procedural discussions and institutional obstacles, measures like this pro-Kiev bill tend to be approved quickly and without the necessary debates, even if there is no benefit to the American people in it. This worries the Republicans, who are unable to stop such measures during the current Democrat term.

The situation that is formed now is one in which the Democrats manage, with the support of the mainstream media and the elites of the great metropolises, to create a scenario of tension that allows the approval of any pro-Ukraine project without prior discussion. On the other hand, the Republicans gain popular support by defending the interests of the working class, which is not concerned with events on other continents, but with their own living and working conditions.

As long as Biden is in power, the Democrats, who have a more interventionist stance on foreign conflicts, will have the opportunity to pass all their bills, but this will fuel a strong wave of popular rejection towards them. As the interests of the American people become represented only by Republican politicians, what is expected for the near future is a great trend of conservative populism, which will increase the internal polarization of the US.

If the intention of the triad formed by the economic elites, the mainstream media and the Democratic Party is only to “support” Zelensky, approving billion-dollar military aid packages is a good way to go. But if they also want a victory in the next elections and prevent the revival of Trumpism and the repetition of events like those of January 2021, the path to be chosen is another.

Russian propaganda cry about western help for ukraine? its very good sign ^^ russobots will cry and bark but its time to face facts, best is yet to come and first big equipment supply will arrive in ukraine in next 30 days then not only kharkiv region will be free from russian dogs but also donbas hahahahahahahhah hans happy, russobots dumb and drunk

Try reality for a change, no one is interested in your fantasies.

Thise are facts decided in USA. And most parts of the world is interested.

40 countries do exact the same as the wast majority do in USA.

Why did you change your name for?

Heritage Snakes in the Grass
Reply to  hand raus

Heritage knows that aid will go down a black hole of corruption or up in black smoke. They’re only trying to save Ukraine now, so they have a better chance down the road. They know the democrats are idiots and useless at war. It’s Heritage who lives and dies under the Wolfowitz Doctrine.

If Ukrainians were smart, they’d sue for peace and let Heritage work them into an army that could really take on the Russians before they break the peace again.

If Russia is smart, it’ll totally destroy the Ukrainian army now, no holds barred, and leave them hurting so bad that Heritage and its neoconnivers never have another chance to take root there.

The US wants to weaken Russia so it can never be a threat again (a threat to who, is a mystery to me), although with thousands of nukes in their hands that’s just a stupid idea. Russia wants to destroy Ukraine’s army for the same reason. Seems pretty logical to me.

Begone white flag weaklings,you and your soros brigade are no match for any commy or hetero,grot!

They don’t cry but they feel funny because US Senater say Ukraine helping budget they must borrow from China.

What are they worried about, it’s funny money / $ backed by nothing , anyway , they can just print more. The debt doesn’t matter as long as the world is letting us get away with this Ponzi scheme we’ve got going .

We all has worries, but USA is the monetary system with us. So we are insurrence for each other.

That money is just money laundering that wont end up in Ukraine anyway it will just fill the pockets of Joe Biden’s family,friends and cronies.

Some links for that would be nice.

Many more should control money flows much better.

historically much is funneled into fake amerikan NGO, etc

“President of US think tank does not agree with unthoughtful wasting of billions of dollars.”

The Jew parasites have bankrupted deadbeat US at all levels.

Tell me again, why does Biden support Palestinians?

Biden is a 80 year old senile fool in diapers and a tool of global Zionism since they plopped Sleepy Joe in the Senate 50 years ago. No US Zionist owned professional parasitic corrupt politician supports the oppressed people of Palestine. Biden while championing the racist Ukrainian Nazis did not even have the decency of guts to condemn the Zionist cold blooded murder of Palestinian journalist Shireen Abu Aklad. The Jew parasites have totally destroyed the US banana republic.

That journalist was killed by the Hamas. False flag attack.

WEe see the US well.

It has a Democratic way by Biden and some ofthe republicans. It says we all are together in organisations. Their problems are the left wing by Sanders.

Most of the Republikans kind of think like Putin and Russia. We are SOO big. By that we are deciders and can slash anyone BECAUSE we are big brother.

In the dayli life Biden has to unite with some Republicans and give as little as possible to those Social Democrats.

I’m an American and I called my two shit senators and told them to not fund this. But they’re democrats, and so they love seeing whites kill other whites.

Heritage Snakes in the Grass

It would’ve been in the interest of America to tell fucktard Zelensky to implement Minsk II and stop fucking around with his neonazi scum. The US was so buddy buddy with the neonazis, they were the only ones who could have muzzled them. Instead, they did the opposite.

Heritage Foundation is neocon central. The only reason they say such things is because the AFU is about to collapse and they know it.

The way they’d have it would have been to agree to Minsk II, then reneg on it like they’re so good at doing, then take over Donbass completely and then really stiffen up the AFU so they could try take Crimea, which has been the neocon’s fucking wet dream all along.

Neo-liberals are getting their assess kicked all over ukraine,and the kikes under soros sqeal like rats!

I feel funny because US Senator said Ukraine aid budget they must borrow from China.

US Jew controlled Senate has spent over $100 billion on this hybrid war against Russia, which is more than the entire defence Budget of India, Russia and Iran. US brainwashed sheeple are eating dog food while the Jew corrupt Zelensky is siphoning off billions and buying property all over the world.

They lacked the balls to create an integrity built society. In the past patriots would hqve stood together and removed agents of foreign subversion.

You are happy with a dead fish, keep dreaming of a relief.