Tulsi Gabbard, a member of the US House of Representatives from Hawaii, has visited Syria and met not only with ordinary Syrian people, but also with country’s president Bashar al-Assad. 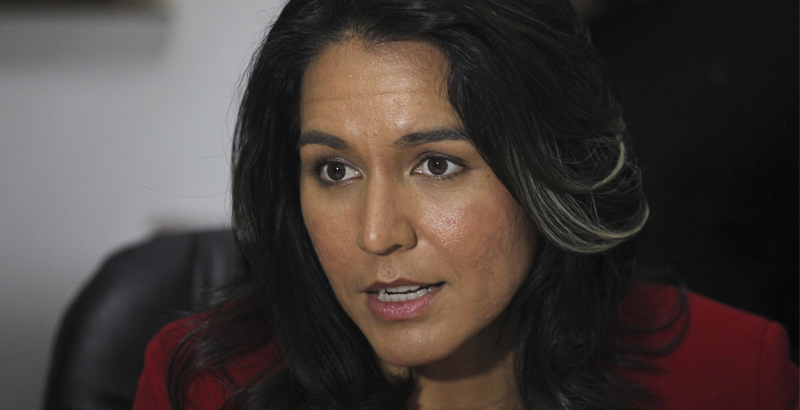 A member of the US House of Representatives from Hawaii, Democrat Tulsi Gabbard told the CNN TV-channel about her recent visit to Syria and meeting with Syrian President Bashar al-Assad.

“Initially, I had not a plan on meeting him [Assad]. When the opportunity arose to meet with him, I did so because I felt it’s important that if we profess to truly care about the Syrian people, about their suffering, then we’ve got to be able to meet with anyone that we need to if there’s a possibility that we could achieve peace,” Gabbard told CNN.

Gabbard noted that Syrian people told her that currently, there is no ‘moderate’ opposition in Syria, as well as expressed fear about Assad’s resignation.

“Every place that I went, every person that I spoke to, I asked this question to them [about arming moderate rebels], and without hesitation they said, ‘There are no moderate rebels,’ ‘Who are these moderate rebels that people keep speaking of?’” Gabbard said. “Regardless of the name of these groups, the strongest fighting force on the ground in Syria is al-Nusra or Al Qaeda and ISIS. That is a fact.”

“The Syrian people recognize and they know that if President Assad is overthrown, then al Qaida – or a group like al Qaida, that has been killing Christians, killing people simply because of their religion, or because they won’t support their terror activities, they will take charge of all of Syria,” the congresswoman added.

According to Gabbard, Syrian people asked her why “the US and its allies are providing support and arms to terrorist groups like al-Nusra, al-Qaida or al-Sham, ISIS who are on the ground there, raping, kidnapping, torturing and killing the Syrian people.”

“They asked me, why is the United States and its allies supporting these terrorist groups who are destroying Syria when it was al Qaida who attacked the United States on 9/11, not Syria. I didn’t have an answer for them,” the CNSNews information website quoted her words.

“The US must stop supporting terrorists who are destroying Syria and her people. The US and other countries fueling this war must stop immediately. We must allow the Syrian people to try to recover from this terrible war,” Gabbard concluded after her meeting with Syrians during the trip.

This week, during the talks in Astana, Russia, Iran and Turkey, as guarantors of the truce in Syria, agreed to establish a tripartite monitoring mechanism for the ceasefire. The US did not send its delegation to the negotiations, only US ambassador to Astana attended the talks. The new administration of Donald Trump has not yet taken a decision on its policy towards the Syrian Arab Republic.

Brave Lady. Tulsi 2022! (If the democratic party does not expel her from its ranks till then..Or she can run as an independent. This would truly be a worthy first female leader for the US!)

Watch, the Jews that control the U.S. will oust her from Government.

I think she is going to be very hard to shut up. Go Tulsi!!!

Not the first time she shows smartness. She also introduce in the US Congress the Stop Arming Terrorists Act : http://www.chroniquesdugrandjeu.com/2016/12/la-tete-de-l-empire-se-dechire.html

Consider this merely a prelude to a reset. SAA is ejecting the CIA from Syria. It is clear, painfully, to Murder Inc that its plans did not quite work out the way they had wanted.

From her interview with the Trump transitions team in Nov. 2016.

“Gabbard, who backed Vermont Sen. Bernie Sanders in the Democratic primary, is being considered for jobs at the Defense Department, State Department and the United Nations…”.

She and Trump appear to share similar views on the disastrous American Neocon policy of regime change and imposing our values on other nation-states.

May she survive her next election given the venal hyenas (media and PACs) that will come after her for doing the right thing.