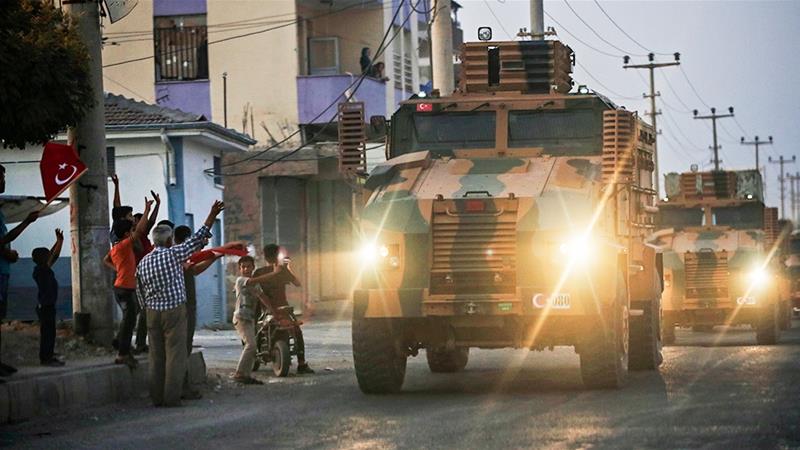 The Republican Graham and Democrat Van Hollen reached a consensus on new sanctions targeting Turkey, after the country began a military offensive against the Kurdish Syrian Democratic Forces (SDF) in northeastern Syria.

I am pleased to have reached a bipartisan agreement with Senator @ChrisVanHollen on severe sanctions against Turkey for their invasion of Syria.

While the Administration refuses to act against Turkey, I expect strong bipartisan support. pic.twitter.com/Ph5fIVt7k3

Graham said that “while the Administration refuses to act against Turkey, I expect strong bipartisan support. … Most Members of Congress believe it would be wrong to abandon the Kurds who have been strong allies against ISIS.”

Graham said he believed Trump is making the biggest mistake of his presidency by withdrawing troops from the region.

“This is worse than when Obama left Iraq, because you’ve got so much information as to what happens. This would be a game changer to our national security. This would pave the way to the re-emergence of ISIS,” Graham said.

The deal came a few days after on October 7th, the two senators announced they were working on sanctions, following US President Donald Trump’s announcement to pull US troops out of northern Syria ahead of a planned Turkish military operation.

The new legislation would be introduced next week, since the US Congress is out for the week.

“This sanctions bill will be introduced as soon as Congress returns. Will ask for an immediate vote to send a clear message to Turkey that it must cease and desist its military action, withdraw its fighters from the areas under attack, and stop the tragic loss of life,” Van Hollen said.

As has become typical for US sanctions, this one would target all assets owned by Turkish leadership within US jurisdiction. The list includes Turkish President Recep Tayyip Erdogan.

The bill would also target Turkey’s energy sector and military, including sanctions against “any foreign person who sells or provides financial, material, or technological support or knowingly does a transaction with Turkish military.”

It would also prohibit U.S. military sales to Turkey and restrict the ability for Turkey’s leadership to travel to the United States.

As per the bill, sanctions against Turkey would remain in effect until the administration certifies to lawmakers that Ankara has withdrawn its forces from Syria.

US President Donald Trump distanced himself from the Turkish military operation on October 9th and said that he would support more sanctions.

“I think Lindsey would like to stay there for the next 200 years and maybe add a couple a hundred of thousand people every place, but I disagree with Lindsey on that,” Trump told reporters at the White House. “But I will tell you that I do agree on sanctions, but I actually think much tougher than sanctions if [Erdoğan] doesn’t do it in as humane a way as possible.”

He threatened to “wipe out” Turkey’s economy if the assault was not carried out “in as humane a way as possible”.

“If (Erdogan) does it unfairly, he is going to pay a big economic price,” Trump told reporters, adding that he’d “do far more than sanctions”.

Separately, France, Germany and the UK are to release a statement condemning Turkey’s offensive in northeastern Syria.

“France, Germany and Britain are finalizing a joint statement that will be extremely clear on the fact that we condemn very strongly and firmly what has been reported,” Amelie de Montchalin told the French parliament’s foreign affairs committee.

She added that a separate European Union statement from the bloc’s 28 states had yet to be agreed because some countries had not signed up to it. One anonymous source said Hungary had blocked the statement.

NATO chief Jens Stoltenberg urged Turkey to show “restraint” in its operation against Kurdish forces in Syria, warning that the fight against the Islamic State group should not be put at risk.

The SDF called on the international community to impose a no-fly zone to protect against “an imminent humanitarian crisis”.

Turkey said on October 9th that its ground forces crossed into northeastern Syria. Turkey pounded the area with jets and artillery, prior to sending the troops. Reportedly approximately 15 people have died so far.

So, how exactly does the US impose sanctions on a formal ally? Wouldn’t this nullify the North Atlantic Treaty?

The EU and NATO are tools of American Empire, of a Washington centered world order, and that empire, and that world order are literally coming apart at the seams. We are witnessing that old one’s ‘passing into history’ and the emergence of a new one.

The betrayal of brother in arms I would never believe that the US was capably of such a betrayal, but I should have known: America has always fled the real fight even if this means leaving his brother in arms behind, never it won a war on his own and now it shows it has no honour or princips, it surrenders to a tyran and blackmailer and violent suppresor. These people fought for you and us,alone, while Erdogan was supporting the Islamic State, they suffered to safeguard your soldiers. Erdogan is going to invade, chasing up, raping, murders, suppressing as he does in Turkey and ethnic destruction with the help of you and a bunch of scum now sitting in Idlib suppressing civilians. This is a genocide, in Nuremberg they tried the Nazi war criminals, I hope the tribunal gets up again to try America next to Erdogan and hang them, as they did then for less crimes. I am disgusted by the US and what it stands for and will proclaim this where and when i can. I am ashamed to be a former friend of America and to be a European. I will help the Kurds where and when I can and boycott the US and Turkey. You are not what you proclaim, is that the reason the world is rejecting the US now-days and that you have those disturbance inside the US? ,

So the US abandoned traitors who tried to stab their government in the back? Big deal.

Your observation, if you really believe it, is very naive.

It’s true, the Kurds and Washington found themselves as “brother in arms” but both did so in the pursuit of very different agendas. The Kurds fought the Islamic State, Daesh or whatever we’re calling it for their own survival. And yes, they might even have hoped to end-up with an independence state of their own. But Washington, although it didn’t object to the idea of an independent Kurdistan, was fighting an offensive and defensive war in Syria for regional hegemony over its peer and near-peer adversaries, Russia, China and Iran. I’m sure you have heard the expression “no honor among thieves”, well the same applies to would be hegemonists.

If don’t understand what you want to proof? You consider them all to be dishonourable so they do not earn respect and help? Who do you consider honourable and no thief in that region, standing above all others? I wonder and maybe if you dear to answer some proof of your statement, so knck you out, I now this might be a bridge to fare for you but please try to be rational.

You can be certain Uncle Sam never leaves his buddy’s behind…..

“These people fought for you and us,alone, ” they fought for themselves. and they fought for CIA. And they were not alone… mainstream media darlings, poor little Kurds, CNN just love them so much… Victims, really? betraying Syria, occupying Arab land, paid and owned by a foreign power. Just as they were paid and owned by the Ottomans while committing a (real) genocide against Armenians together… p.s. America has no right to be in Syria in the first place.

Boycott Turkey: all products barcodes who start with 868 or 869 DO NOT BUY THEM. While your governement is doing nothing do not helpErdogan and Trump commit the next invasion and Turkish genocide on the only real protectors of the world against Islamic State.

It is really mind blowing to read an apparently “senator” of the U$A talking about sanctions for “invasion” of Syria. In italian we say aver la faccia come il culoto describe such reality twisting statements

How nice of them to fill in wherever Trump leaves on the good strategy of sanctioning everybody and anybody. The sanction on energy sector gave their real intentions away. It’s about Russian gas pipeline to southern Europe through Turkey, isn’t it?

And to say they punish their ally for “invasion of Syria” with a straight face? It requires a special set of skills, guess Lindsey Grandma got that covered. It will be fun to watch if Turkey invokes NATO article 5, by shelling towns and cities in southern Turkey PKK and YPG certainly gave them an excuse to do so.

I’m sure Turkey’s reaction to these sanctions will be an immediate withdrawal with apology and severing all their ties with Russia. They won’t even think about responding in kind and restricting US armed forces on their soil.

Russia couldn’t hope to receive any better gift from the US in regard to Turkey. Let’s see what they do with it, I hope they use it to push Turkey into cooperation in Syria and with it’s government.

Turkey cannot do anything!..Erdogan is a hostage of Radical islamism that he himself has created! he just try to save his face once terrorist have been defeated and Idlib will be retake soon!…

If the US sanctions Turkey is Uncle Sam going to get kicked out of the Incirlik air base? Could be a major plus!

Bring it on, Neocons. This will be a huge victory for Eurasian integration and a huge defeat for the US/Israel dominated bloc.

The US has gone so overboard with sanctions nonsense that it’s becoming self sanctioning because people are avoiding dealing with it and are seeking out alternatives.

You have to consider the source of these sanctions. They’re coming from Zionist Israel firster anti American traitors. Who are responsible for the horrific mess that they’ve made of US foreign policy and government.

Lets hope they do it and it goes through, thats is the only way to save Turkey and would be a catalyst to dissolve NATO and perhaps EU.

The US betrayel of Turkey would be its saving grace in the long run.

“When it comes to foreign policy there are no democrats or republicans.”

Correct. Only the Zionist Party.

Turkey should be finally expelled from NATO. Of course they won’t be, giving the lie to all this American and European hand wringing over the Kurds. It’s all bullsh*t.

Turkey is perhaps the most important NATO member (except the US ofc). Not just their army is 2nd largest, but also their strategic position is incredibly important: eastern Mediterranean, Black sea, Caucasus, Balkans, Middle East… losing Turkey would be a strategic disaster for NATO/US. Surprisingly, that’s something Trump understands better than these psychotic neocon degenerates like Lindsey Graham. They don’t give a flying fck about Kurds, they just want to continue to destroy Syria.

Oh boy I love this. Putin is probably like “I wonder from where Turkey can buy things he no longer can not buy from US #trollface ”

US foreign policy could be handled by a 10 y.o kid.