On March 21, the US-led coalition airdropped hundreds of fighters of the so-called Syrian Democratic Forces (SDF) to the area west of Tabqa in a shock attack to cut off the Aleppo-Raqqah road and to capture the ISIS-controlled Tabqa Dam.

According to CENTCOM, the SDF (predominantly the Kurdish People’s Protection Units) plays a key role in the operation. However, the coalition does not deny the presence of US troops in the area. In other words, the US-led coalition’s ground force spearheaded the operation.

Since the start of the operation, US-led forces have already cut off the Aleppo-Raqqah road and seized the villages of Abu Horaira, Hidaj, Krein, al-Jameen and al-Mushayrifah.

If the US-led coalition forces are able to capture Tabqa, it will be a major step in isolating the ISIS stronghold of Raqqah and will prevent a possibility when Syrian government forces could reach it from the southern direction. 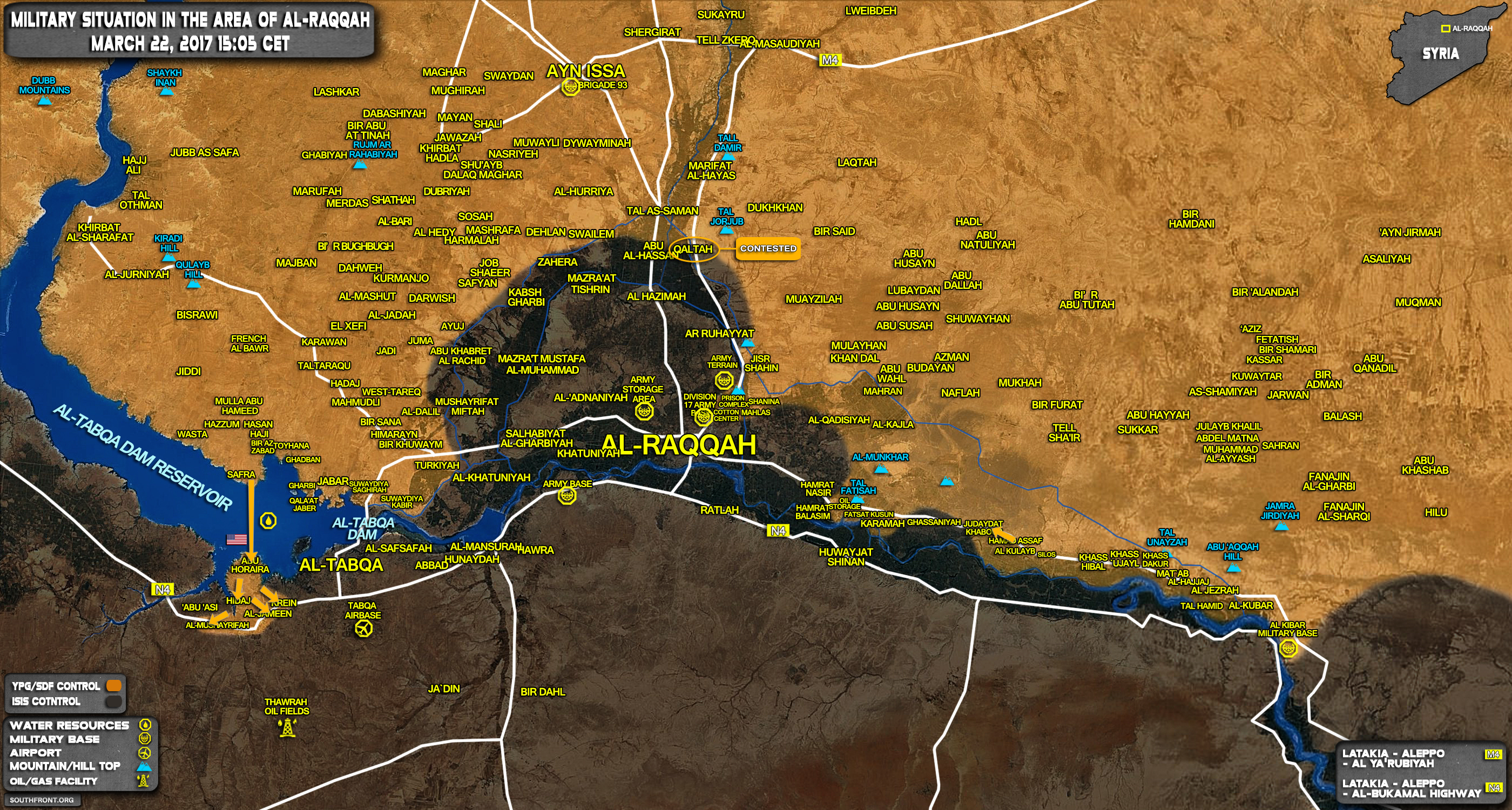 The only big advantage I can see of this to cut off SAA from the area. The road leads to the area currently being liberated by SAA. This was the only road they didn’t have to worry about.

Indeed, so it seems

You are probably right…but it’s also a fantastic strategic move in an ongoing operation by the SDF/US to encircle Raqqah. None of us can know who will officially take control of Raqqah administratively right now, so let’s just appreciate that Raqqah is being surrounded!

The dam is being reported as liberated now.

SAA is basically slowing down on the assault on ISIS as you can see (Hama NDF again losing) so..

This gives the SAA the advantage since Daesh can’t run men and supplies to their front line fighters when the SDF is in the way. We’ll see how fast the SDF moves along the highways to seize vital junctions that will isolate the ISIS units inside the Syrian Desert and in the west.

What a bad time for SAA, iam afraid that whole eastern Syria will fall to USA, what worries me that Russia dont care to much about that

On the other hand the Russians and the SAA could threaten the Kurds to withdraw their protective forces from Manbij if they don’t hand this territory over to them. I’m sure the Turks would be more then happy to oblige if given the chance to move on Manbij.

this is clear for several months. russia is weak and need money and technnology from west. they sold out syria. similarly like cuba and vietnam in the beginning of 90ties.

Iran my not be to happy about this turn of events – or Turkey! Looks like WE have adults in charge at last!

putin, now you have a big, big chance to show, the russians ar much better. drop paratroopers to tabqa airfield and raqqa city.

i saved the videos with your big mouth and speeches in september/october 2015. until today you did nothing from these plans.

Are you crazy, dude? Why would Russia do that?

becouse he told, russia will show for world… i have saved his speeches ;)

Drop russian paratroopers in Tabqah and fight the americans and the kurds … who dropped there to fight ISIS?

That doesn’t even make sense…

i wrote tabqa airpoert. there are no americans. yet.

Yes he is most definitely a certified loon lol

Timing could not be worse; the situation in northern Hama means that the Tiger Forces need to be deployed there now, so momentum around Deir Hafer has stopped entirely, so ISIS has nothing really distracting them from the Kurds, who were already surrounded on all sides. Bad idea even when the SAA was putting pressure on ISIS, disastrous now.

Some think it on purpose taking Tabqah so SAA can’t get it. I don’t know if that is true or not but not taking tabqah before raqqa is dangerous because of the dam. The terrorists groups in Hama launched the offensive taking advantage of the fact SAA sent majority of it forces to fight ISIS.

Rest easy. The dam has been taking by a frontal assault rom the north.

No this is good for Syria. It should draw all lSIS fighters away from Deir Hafer, Palmeria all fronts with the Syrian army as this assault will split ISIS in 2 and severely weaken ISIS if it succeeds. If ISIS does not concentrate all its efforts on this USA attack it will be clear ISIS is working with the USA but it will still weaken ISIS anyway. I also seriously doubt that the Kurds or the USA can hold this Arab area and keep it from the Syrian government.

Or they could abandon Raqqa and send everything they got into Deir ez zor and make it the new ISIS capital.

Hahahah I loveeee it

Daesh has done did that months ago when it became painfully obvious that they couldn’t hold Mosul nor Raqqa or onto much anything else for very long. Their key officials, officers and their families were shuffled off to towns and villages along the Euphrates south of Deir Azzor where ISIS still has control of the vast wastelands on either side of the river. Those wastelands are sparsely populated with tribes who became fed up with Deash long ago so are now being recruited by the Iraqis and SDF to harrass Daesh traffic and positions out in the deserts.

ISIS has already drawn away fighters from the rear to reinforce the fronts. The SDF knows where ISIS is undermanned, strikes there and keeps moving as the demoralized Daesh fighters flee down the road. The towns and villages in their rear are mostly garrisoned with local recruits who basically joined ISIS to earn a meager income and get at least one decent meal each day. ISIS knew that they wouldn’t be dependable fighters but needed someone to guard the rear areas that were less prone to being attacked by the locals, which became a problem for them shortly after taking over the regions. ISIS did leave some fanatics in charge at each location but many probably have been redeployed elsewhere. I wouldn’t surprised if we start hearing about their local recruits shooting the few fanatics riding herd over them so they can escape from the advancing SDF and SAA.

I wonder how can anyone be more motivated to fight than the SAA. They are defending their own freaking country from invasion for gods sake! What is motivating Isis?

Religious fanaticism is motivating the true believers. Fear of reprisal and torture is motivating local recruits and trapped foreign fighters. Then there’s the disillusioned and demoralized fighters who are forced to fight unless they want to get shot on the spot for cowardice.

No you are wrong especially if there are not that many ISIS tough guys around around and I am single and holding an AK47 and get some gernades as well. When one is armed no one can tell one what to do if you don’t want to do it. I would just walk over to where the ISIS fanatics are and toss a few hand gernades at them and kill any left over after the explosions with my AK47. Then say it was Rusian or American special forces who got them to any other ISIS tough guys who show up and then do the same to them.

Sorry to say you are wrong. ISIS just withdrew from Deir Haffer to send everything to fight the SDF at the Tabqa Dam to stop the splitting of their forces in 2. This means that the SAA did not have to fight any battle at all to take Deier Haffer which is good news. Now the SAA can chase them all the way to the Tabqa dam. Now is also a good time to advance from Palmeria to Deir Azur.

Again you are all wrong and I am right again. ISIS withdraws from Der Izur to reinforce Raqqah.

Maybe you guys are Israeli disinfo agents or just lay persons. The SAA must advance from Palmeria to Deir IZUR now. The Deir Azur garrison should now be able to push ISIS out of the city on their own and launch their own advance to regain Syrian territory in all directions.

All these Al CIA Da advances are directed by Israel. Russia should use its strategic bombers and cruise missiles to wipe out Al CIA Da once they are engaged by the SAA and put into static positions. Too bad Russia doesn’t have Daisy cutter bombs. Very large conventional bombs just a bit smaller then the Hiroshima nuke to drop on large Al CIA Da formations when they are out in the open like this and not in towns and cities so they can be wiped out more efficiently.

True but I think Isis already does work with US and Israel. I read some US helicopters landed in Isis controlled areas a while ago.

There is no government in this area. The nearest front line between SAA and IS is 50 kms away.

The last time SAA rushed into the desert, to try take Tabqa and then Raqqah, they were outflanked by IS. They will not do this again.

Given the present rebel attacs on Damascus, Hama, it is unlikely there will be a rush offensive by SAA towards Tabqa. More so as there are reports of rebels transferring from Azaz etc to Idlib.

Big reinforcements have already been sent to HAMA.Give it a day or 2 and the situation will begin to reverse.

No doubt this surprised the hell out of ISUS. The good thing is it will draw some Daesh away from the SAA front. Making their job easier. The landing spot looks ideal. A protected peninsula very close to Tabqa airbase. Though I thought the SAA would get there first. But destroying ISUS is a good thing.

I think Russia has to pay lip service to YPG even train some of them because IS was established by Allah to end the Freedom Fighting armed opposition myth, – eg. when was the last time Alwais was plugged up in jew media as the cause of unrest, a decision was made at the highest level, Pizzagate, to give Kurds a not so Sunni media identity, – best thing for it now that the Kurds are making their jew Messiah Event come to fruition is to get behind Erdogan. Remember I was posting all this year Erdogan would split it with Trump, North goes to Turkey as safe zones and Raqqah belongs to Trump, their weakest link is the Kurds in Turkey and Syria being mercilessly killed everywhere except Raqqah while Assad weeps crocodile tears and Erdogan jumps for joy, but we need the YES vote or Syria becomes Afghanistan.

A bridgehead across Lake Assad! This is very daring for SDF and Kurds. They must be using a ferry system to get vehicles across if they wish to succeed. Maybe the Improved Ribbon Bridge (IRB) system used as ferries. Lighter supplies can be air dropped. I am thinking that 82nd air transport is involved in this operation. Marine fire base is sitting on the north shore. All you need is good spotting to kill Daesh dirtbags. :)

The bridges to Raqqa were destroyed by USA/Nato airstrikes to prevent Russia and SAA forces movement to Raqqa.

USA soldiers are foolish their know this people are scared of hight.Their were supposed to allow this guys to plant bombs in ISIS tunnels and airdrop some perks from the sky because are dam scared of pork.Their could have easily run to tunnels and activate bombs and go to he’ll and meet their six virgin demons there.