On September 24th, US Secretary of Commerce Wilbur Ross fell asleep during US President Donald Trump’s speech at the 74th United Nations General Assembly. Wilbur Ross does have a history of actually falling asleep during speeches.

A former Commerce Department adviser told Politico in July 2019 that Ross had a reputation for falling asleep.

“Because he tends to fall asleep in meetings, they try not to put him in a position where that could happen so they’re very careful and conscious about how they schedule certain meetings. There’s a small window where he’s able to focus and pay attention and not fall asleep.”

“The future does not belong to globalists. The future belongs to patriots,” Trump said in the most defining quote of his 30-something minute speech.

He criticized Iran, saying that the people in Iran deserve a government that cares about them and about providing them with jobs. According to Trump, four decades of failure were enough and the Islamic Republic deserved a government that didn’t focus on threatening other countries, but rather building up its own.

He called Iran’s regime one of the “greatest security threats facing peace-loving nations” and urged nations not to “subsidize Iran’s bloodlust.”

He then said that the US was ready to “embrace friendship with those who seek it” and it “never believed in permanent enemies.”

“America knows that while anyone can make war, only the most courageous can seek peace,” he said.

Trump also took a shot at Venezuela’s Nicolás Maduro in his speech, calling him a “dictator” and a “Cuban puppet.”

Trump then turned to China, listing his ever-increasing list of complaints.

The second largest economy on the planet shouldn’t be allowed to declare itself a developing country, at the expense of others, Trump said.

Trump essentially said nothing new, or interesting, which led to Wilbur Ross falling asleep, with most other world leaders seeming completely uninterested in what he had to say.

Separately, the US, in the face of Deputy Secretary of State John Sullivan led more than 30 countries in expressing condemnation of what was allegedly going on in China’s Xinjiang province.

In US words, China was carrying out a “horrific campaign of repression” against ethnic Uighurs in the province.

Sullivan said the United Nations and its member states had “a singular responsibility to speak up when survivor after survivor recounts the horrors of state repression.”

“We invite others to join the international effort to demand and compel an immediate end to China’s horrific campaign of repression,” he said. “History will judge the international community for how we respond to this attack on human rights and fundamental freedoms.”

So far, at the UNGA one thing is becoming apparent – the US struggle for relevance, and it appears to rather be failing in the endeavor.

It was absurd speech, usual rumbling and demagogy.

Trump is incapable of a rational lucid speech, he just utters nonsense and no wonder his own cabinet members go to sleep. US is just hot air and bombast as the world has moved on.

Zionists have been doing just that for over 100 years. Trump is just a puppet, sad fate for billionaire if you ask me :)

The whole Americunt shithole is in the hands of retards :)

dunny the dunce aka trump, is a bore and to fall asleep during one of his talks is just a natural instinct taking hold of the present and providing some rest for the weary. nothing else.

Glad his defence lawyer is well worth listening to, if Donald gets too boring.

I wonder if he would have woken up, if Trump was reading ‘The Gateway’ article’, as Biden and the Dems so come to mind, with regards their good mates over in Ukraine.

‘…Pinchuk is the founder of the Victor Pinchuk Foundation, which has “used offshore companies to funnel over $29 million to the Clinton Foundation since 2012, the largest transfers in 2015 and 2016,” Prozorov says.

Despite being one of the poorest countries in Europe, Ukraine was THE LEADING DONOR to the Clinton Foundation 1999-2014, the Wall Street Journal reports: “Mr. Pinchuk and his wife—the daughter of former Ukraine President Leonid Kuchma —began donating to Clinton charities in 2006 after being introduced to Mr. Clinton by Doug Schoen, a pollster who has worked for both Clintons.”

“Ukrainian steel magnate Victor Pinchuk gave the (Clinton Foundation) $10 to $25m”, The Independent wrote in 2018. “And he was by many accounts not shy about asking for help from Hillary Clinton when she served as secretary of state…”

Via the Wall Street Journal: 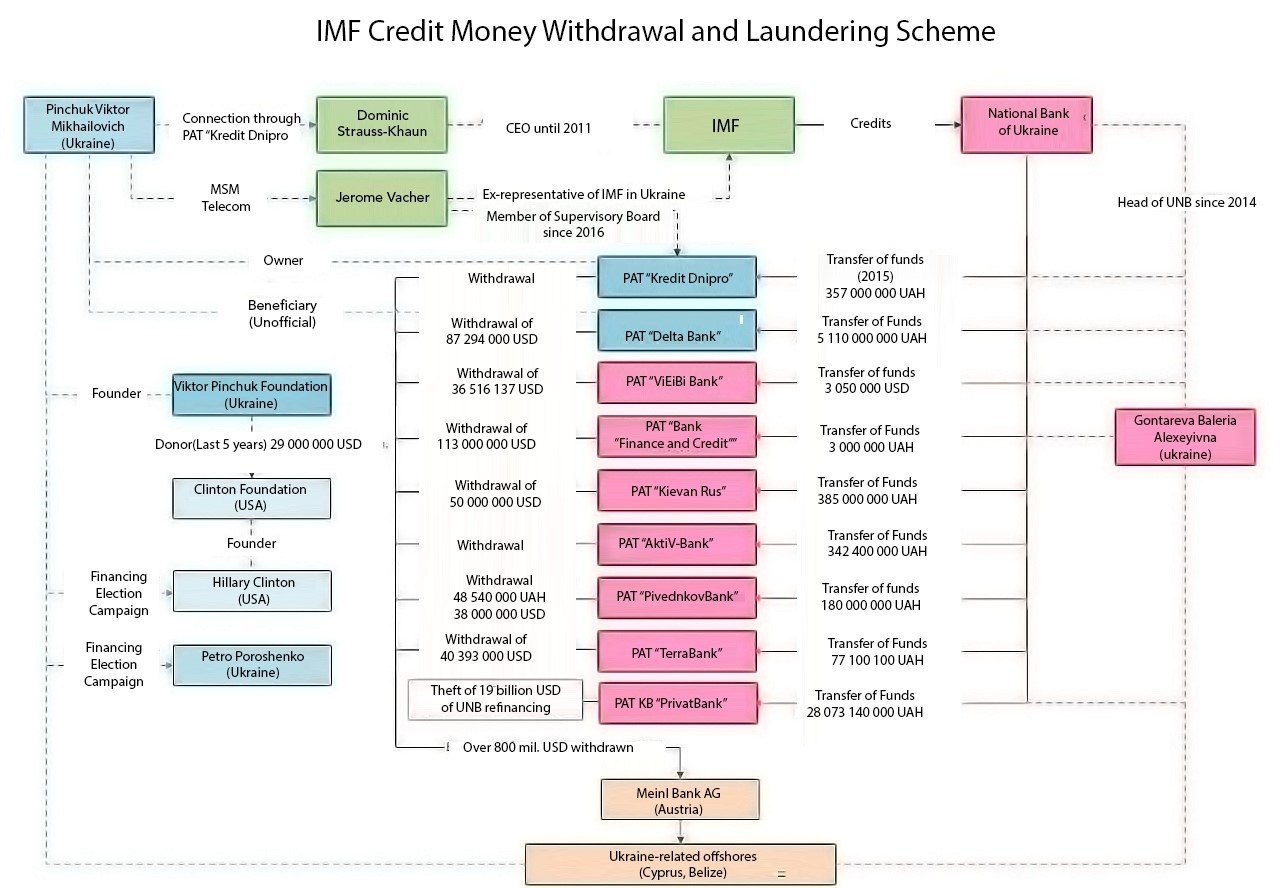 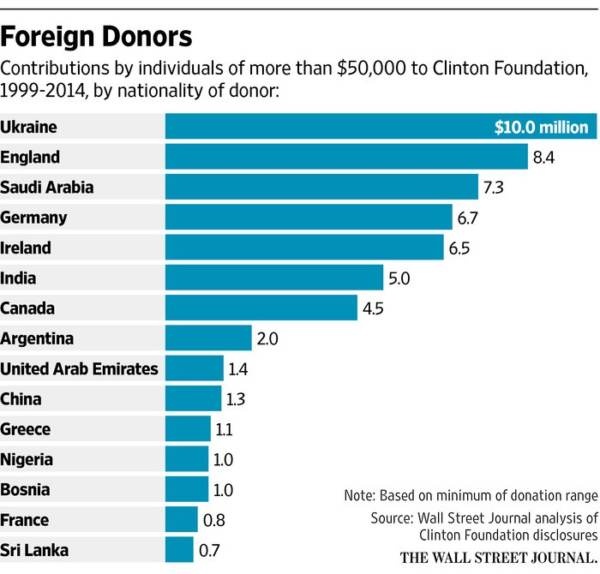 When I listened to Trumps ‘speech’ ,it was a series of short and partial sentence’s. It was as if Trump was receiving a pre written text to parrot via his ear piece. :)

You are braver than me, could not be bothered as he seriously bores me.

Saying that, I am seriously excited, owing to just listening to Rudy Giuliani being interviewed. OMG, so needs viewing, as he is really going for it. Biden, Soros, Clinton, Obama, Ukraine, China etc, etc, etc with so much more to come. Wonder how they will put this genie back in the bottle?

Trump, is due to meet the Comedian, running things in Ukraine, whose mentor just happens to be Kolomoisky and good friend of Biden, sometime tomorrow. Guess, he is over in New York, for the UN freebie. The meeting, just before Trump releases the private phone call, to keep the Dems sweet. I wonder how many world leaders will speak candidly to Trump now? Knowing that anything he says, classified and above, will be in the public domain, within hours?

‘SHUT UP, MORON!’ Giuliani Erupts on Fox News Guest for Comments About His Ukraine Involvement… https://www.mediaite.com/tv/shut-up-moron-giuliani-erupts-on-fox-news-guest-for-comments-about-his-ukraine-involvement/

AM, do not forget what guiliani knows about 911.

Cannot see him unzipping his lips for that one. However, do believe he is a tad miffed, that Ukraine cost him one of the key positions in Washington, when Trump was first elected. Wasn’t Rudy up for Attorney General, but, lost out to Sessions, owing to some dirty tricks beforehand?

Although, Sessions was already in situ at the time.

US is now largely irrelevant in the world and a global laughing stock.

Maybe Pompeo could be fired, for bruising Trump’s ego.

Sleeping option is on the table because it is usual preplan NATO lies by biblical Goliath Trump.No one in this entire universe wants to listen to France, Germany, Britain, Germany Turkey ,Israel puppets and USA bloody nonsense.