The Supreme Allied Commander Europe of the NATO Allied Command Operations has once again said that Moscow supports the Taliban in Afghanistan and even supplies the radical movement. 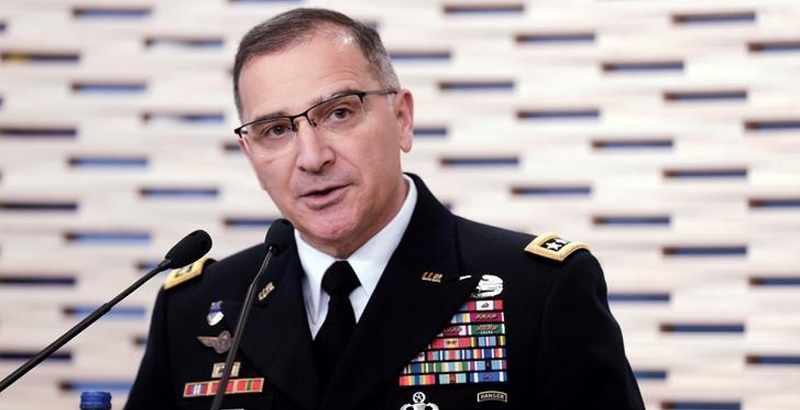 Commander of the US Forces in Europe, General Curtis Scaparrotti speaks during a news conference in Tallinn, Estonia, March 14, 2017 (Photo: Reuters / Ints Kalnins)

Russia has recently increased its influence on the Taliban radical movement, operating in Afghanistan, and perhaps even started to provide support to it, Supreme Allied Commander Europe (SACEUR) of the NATO Allied Command Operations, US General Curtis Scaparrotti, said during hearings in the Senate Armed Services Committee of the US Congress on Thursday.

Discussion of the issues, related to the Taliban and the situation in Afghanistan, was started by Senator Ted Cruz (Republican from Texas State). The politician pointed at the “growing support,” providing by Moscow not only to the Taliban, but also to the Islamic State (IS) terrorist group. Cruz did not give any details and only referred to some media reports.

In response, Scaparrotti said that NATO and the US “must win in Afghanistan.”

“I’ve seen the influence of Russia of late – increased influence in terms of association and perhaps even supply to the Taliban,” the General, who also heads the US European Command, said.

Finally, he accused Russia of the fact that it does not notify in a proper manner foreign partners on some of its military exercises.

Meanwhile, special representative of the Russian president and head of the Second Asia Department of the Russian Foreign Ministry, Zamir Kabulov, told the RIA Novosti news agency that US statements, according to which Moscow supplies the Taliban, are lies.

“This is absolutely false assertions, we have repeatedly reacted to this. It does not even deserve any reaction, as these statements are concoctions, aimed to justify the failure of US military and politicians in the Afghan campaign, we cannot find another explanation,” Kabulov said.

According to the diplomat, the US duplicates such statements in order to find an originator of its failures. “But they are looking for the originator anywhere, only not in Washington,” he added.

Previously, the Russian Foreign Ministry already stated that Moscow’s limited contacts with the Taliban should encourage the movement to reach peace and ensure the safety of Russians in Afghanistan. The department stressed that these actions do not “legitimize” Talibans, as they were actually recognized by Kabul as dialogue partners during a series of official meetings in Qatar, China, the UAE, Norway and Pakistan in 2015.

Clowns…they are in war with Saudi Arabia by 15 years but they call them “Russia”. And USA have no one intention to win the war with no one…they would only fight to raise nationalism and anti-socialism. Their first enemy is ever internal :D They fear only if the left win the elections in USA.

They are also starting to accuse Russia of military supporting Haftar in Libya . It seems that we can see new proxy wars

But this is true :D And right :D

But I thought they defeated the Taliban back in 2001!

The only thing NATO has fostered in Afghanistan is a massive increase in drug production.

This General just smoked a cup of his own dried shit , literally. He cannot admit that US strategy and tactics have failed. Nor can he admit that trying to create a conventional army out of people that knew how to fight for 30 years prior has failed. For the most crucial part of the war(2009-2014) most US troops deployed there were short term volunteers with very basic training just making up the numbers for the surge and acting as policemen in far flung outposts. Even the Taliban rated the Soviet Army as better and tougher. The US military knows nothing of winning over a civilian population and using special forces effectively. For most of the war special forces found themselves doing door-kicking and night raids better suited to good conventional infantry.They should have been used to create a good Afghan recon force and to win over the civilian population and gain intelligence on the Taliban.The said recon force would have taken over the Spec Ops role of winning over the population and gathering intelligence on the Taliban for the conventional forces to act on. Instead the Afghan Army is road-bound and doing exactly what the Americans did , door kicking , night raids and wanton airstrikes that have killed more civilians than Taliban. These poor tactics have effectively turned the populace in restive areas like Helmand into Taliban supporters. This corporate pen pushing General cannot man up and take responsibility for the poor US military performance. So what does he do?? The most absurd of all things. He blames Russia instead.

and perhaps even supply

This means that he doesn’t really know and is just throwing out an unsubstantiated accusation. This is the problem of Russophobia, it becomes acceptable to throw out garbage like this because no one will pushback against it. The Western MSM will fawn over a U.S. General but will stomp their feet for days on end over a U.S. President’s tweet in the name of being the public’s ‘watchdog’.

Sycophancy is a speciality of the Western MSM pressitutes…

US idiots are determined to turn the planet into a radioactive ball of ash.

They think they can win the war thanks of economy. They would only isolate Russian economy thinking Russia will implode. What the most beautiful thing? Russian don’t really need the free market because they have all: resources, tecnology, population. A isolate Russia don’t will implode: will became another URSS

You lose an election, Russia did it! You lose a war, Russia did it! What’s next? Russis becomes now responsible for global warming, climate change, the outcome of the Eurovision songfestival, naming the wrong movies at the Oscars, any time you need an excuse for your own failure?

I’m sure Russia’s secret services are into shady stuff somewhere, but the amount of things that they now get blamed and credited for is becoming absurd. It wasn’t even remotely like this in the 80’s, when Ronald Reagan was fanning the flames of the Cold War, and I was around during that time. There’s so much ‘Russia did it’ being cried that I’m starting to become blasé about it even if it were true. Like that boy who cried wolf all the time. And so far I’ve yet to see a single shred of evidence. I’m willing believe that Russia might be doing something, all states do this to further their own interests, but come on, where’s the beef? Show us some evidence, don’t expect us to trust you because you have such beautiful blue eyes.

Why has the U.S. been supporting Al Qaida in Syria, and Chechen and Uighur Islamist terrorists against Russia and China? Also, the U.S., together with Pakistan and Saudi Arabia, supported the Islamic mujahideen in Afghanistan against the Soviet Union all through the 1980s – the same mujahideen who later gave rise to both Al Qaida AND Taliban. This is typical shameless, lying, self-serving U.S. hypocrisy.

However, the Russian response to this verbal U.S. attack is, as usual, TOO WEAK. Instead of just being on the defensive, saying “No, we’re not supporting the Taliban, really”, the Russian spokesmen should GO ON THE COUNTERATTACK and point out forcefully the long history AND continuing reality of U.S. support for militant Islamic jihadis everywhere against secular nationalist and socialist governments and those that they declare to be their geopolitical adversaries.

I agree with what you have written. In terms of Russia, I think their position is that they have covered it before and it is just too stupid to comment on anymore. A good weekend to you Spunky.

“In terms of Russia, I think their position is that they have covered it before and it is just too stupid to comment on anymore.”

Wrong thinking. Most people in the world are too uninformed, naive, stupid, lazy, low-attention-spanned, distracted, or brainwashed to be aware of the bigger background facts in these international issues – especially with things which are further back in time than a few years, AND were not reported truthfully at the time either. NEITHER DO MOST OF THEM KNOW, OR REMEMBER, HOW THE RUSSIAN SIDE “COVERED” AN ISSUE BEFORE. That’s why the Western MSM, with its broad global reach, continues to be such a powerful weapon; and why its lies and propaganda need to be continuously countered and refuted.

Good weekend to you too.

Uh’Murikkkan fuktards… the only truly renewable resource that Uncle Scam seems to have….

Is this really what they are spending their time on in D.C.?

The Taliban? Oh, Cruz really means the rebranded Mujahideen. Those were the crazy Saudi-inspired jihadi head-choppers that the U.S. recruited and trained in Pakistan to fight the Russians in Afghanistan in the 80’s. That’s why they even came into being as a military force. Remenber, Cruz? Damn goblin – of course he doesn’t.

This is high comedy. Reminds me of the failed effort by politicians/MSM last year to convince everyone that Iran (Shia) were somehow supporting Wahhabi head-choppers in Syria and Iraq. The contortions required in that logic were truly astounding. Then there was Assad supporting ISIS… this just never get’s old.

Russia hates ISIS that’s why the bombing the shit out of them ( going back to Afghanistan = their billion dollar drugs are in danger ) Thanks NATO n US for bringing democracy by force n killing innocent life’s, destroying a sovereign country.. they said sadam Hussein he kills his people the fist week that US invaded Iraq alone died more then a million another five million for sanctions Everyday Isis sends 5 VIBED cars Since sadam died Iraqi ppl are suffering Same as Libya, Syria, Yemen, Afghanistan So fuck you the west you n your democracy And I hate those ISIS fuckers they nothing but a thugs who work for the deep state