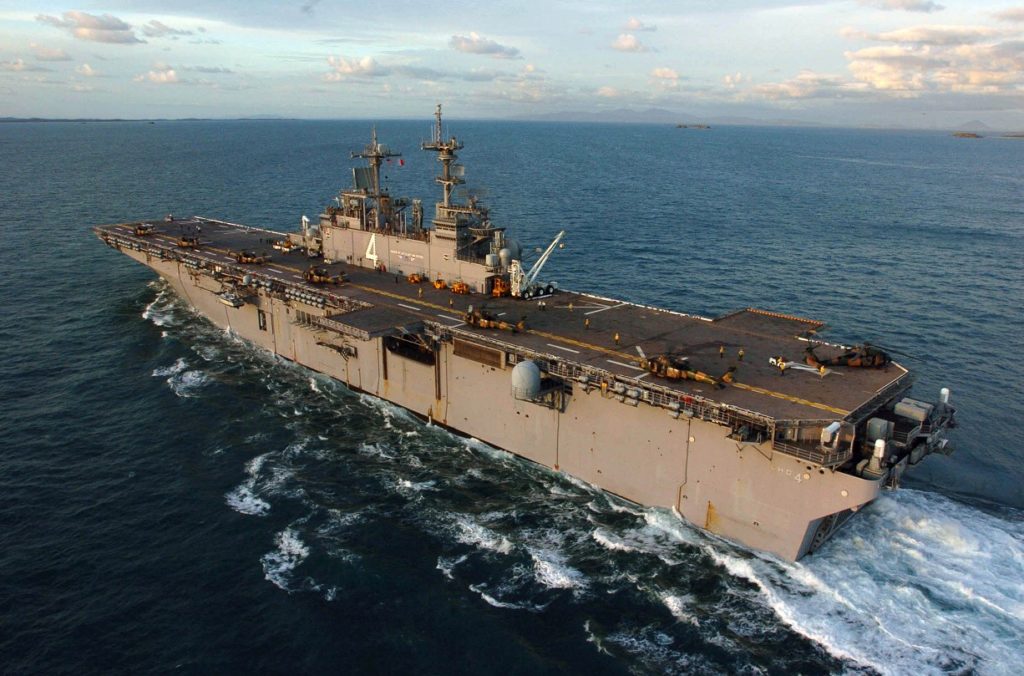 On July 18, Amphibious warship USS Boxer (LHD-4) took down an Iranian drone, the US claimed. According to the US version of the events, the drone threatened the ship as it entered the Persian Gulf.

“At about 10 a.m. local time, Boxer was transiting Strait of Hormuz when an Iranian fixed-wing drone approached the ship, a defense official told USNI News.

The crew of the ship took “defensive action against the unmanned aerial system to ensure the safety of the ship and the crew,” the official said.

The official would not detail the method in which Boxer downed the drone. The ship is armed with RIM-7 Sea Sparrow short-range anti-ship missiles, and the RIM-116 Rolling Airframe Missile (RAM) and Phalanx CIWS point defense weapons systems. Additionally, the Navy and the Marine Corps have begun to field a wide variety of non-kinetic systems capable of downing a drone by other means. News of the intercept first came from a press event at the White House in which President Donald Trump told reporters of the downing of the Iranian drone.

“This is the latest of many provocative and hostile actions against vessels operating in international waters,” Trump told reporters in the White House on Thursday afternoon,” USNI News reported.

I want to apprise everyone of an incident in the Strait of Hormuz today, involving #USSBoxer, a U.S. Navy amphibious assault ship. The BOXER took defensive action against an Iranian drone…. pic.twitter.com/Zql6nAUGxF

Meanwhile, Iranian Foreign Minister Javad Zarif re-tweeted a map that shows the border of Iran and the border of the United States.

Earlier on July 18, Iran’s Islamic Revolution Guards Corps annouced that their naval forces had seized a foreign vessel smuggling fuel in the Persian Gulf. According to the videos released by Press TV the detained vessel was the UAE tanker, sailing under a Panama flag, which “disappeared” in the Persian Gulf earlier this month.

Maybe it’s a good thing. A drone for a drone, now can we talk? Btw, how can you contact a drone?

…or maybe, fly closer on in, drone boy. We got powerful recargers for your ‘batteries’ and syntetic lube to keep you loose. Hot, sweaty American femaie sailors in maintenance will polish you up all pretty. What do ya say, big boy? Come closer and see all our goodies. [intercom: “OK, he’s within range Launch, launch, launch…”

The US politicians are responsible for all economic terrorisms and for chaos in all these countries Afghanistan, Palestine, Syria, Yemen, Libya, Sudan, Nigeria and so on. That is why I say America is a terrorist state bigger than ISIS and Israeli states.

ISIS is a creation of Israel , US , S Arabia, Gulf States , USA and ISRAEL Govs are the main sponsors of terrorism on the planet , pure human garbage governs those 2 countries, in this case USA taken by ZIO JEWS , and the American cowboy morons, [most of them at least] are doing nothing stop it, too busy being brainwashed and idiotized by their own government and TV media.

Iranian leadership is either blind or naive. US and Zionists will attack Iran as it is the last domino in the Yinon plan. Even dirt poor Pakistan and DPRK became invincible when they got nuclear weapons and gained global respect. Even though Pakistan and its corrupt ISI are the biggest Wahhabi terrorist sponsors, India has largely been check-mated to to nukes. Iran will disappear as Trump has vowed if it does not test a nuclear weapon. Indians have a lot of respect for Persians who are a very civilized people and contributed immensely to Indian and global civilizations, but obviously led by an inept theocracy that has no strategic vision and has brought a lot of misery to the Iranian people for nothing as its nuclear program has been peaceful all along, but brought on the worst sanctions. Iranians deserve better.

Its time to show some force to the terrorists around the globe .

I am Canadian of Indian origin and you are disgrace to all Canadians.

Hes not canadian my western brother. He dont even know what raptors are.

Iran is the last domino in the Yinon Zionist plan for regional hegemony, it will be attacked no matter what it does to deescalate. The one and only option for Iran is to test a nuclear weapon and put the Zionist entity on notice. With US criminals only a balance of terror works.

no video = hoax or false flag….lol

This is such a bs story.

naturally a fake piece of news for the gullible west – after all, a quickly disintegrating states of A’s ship in the hormuz shooting down a drone belonging to the riparian state Iran. sounds desperate to the umpteen degree but then desperation in washington is palpable and that includes the illegal thieves and murderers on the land they’ve stolen from the palestinians. dunny the dunce’s campaign meetings now a days resemble what old adolf hitler got together in nuremberg in the 30s – just waiting for the drumbeats and the torches and the chanting of heil heil dunny heil heil dunny!

Any bomb that falls on abortion banning Iran, can never fall on abortion rights defending N. Korea, Serbia or Cuba.

So a bomb can fall twice?

Hahaha I missed u man where u been?

I have some other interests. Mostly read https://www.counterpunch.org/ , comment on their Facebook page and group, plus local housing supply and demand issues effecting rents. If you pick up litter, they’ll raise rents. Also immigration and single family ZONING raises rents and municipal abortion funding lowers rents, and local school tax, which is added to rent.

lol that’s why mullah terrorists shouldn’t mess with the USS Boxer! Because they’ll get knocked out :-]

US may have shot down own drone in Persian Gulf, Iran says of Trump’s ridiculous claim

“Unlike Trump’s delusional and groundless claim, all drones belonging to the Islamic Republic of Iran in the Persian Gulf and the Strait of Hormuz, including the one mentioned by the US president, have returned to their bases safe and sound after carrying out their scheduled surveillance and control operations,” Brigadier General Abolfazl Shekarchi said.

“The Armed Forces of the Islamic Republic of Iran always feel duty-bound to protect, control, and safeguard the security of the Persian Gulf and the Strait of Hormuz with full vigilance while observing international regulations,” he added.

No drone was downed by the rusted junk US ship. It is just desperate propaganda. Have a nice day and be careful about the nose in racist America.

Oh wow it took you 6 hours to come up with that one.

Yes a drone was shot. Who shot the done? The US did. Whose drone? Probably Iranian made $12 drone. Why will they shot the drone it was part of the part of the progress plan that Trump announced three days ago with the Iranians.. We need face saving retaliation to make more progress with talks and eventually lift sanctions and renegotiate the JCPOA.

Iranians claim US ship downed US drone? If I am there I would send a drone on US carrier and lend it on a deck and leave it there, just to show how incapable defense they have.