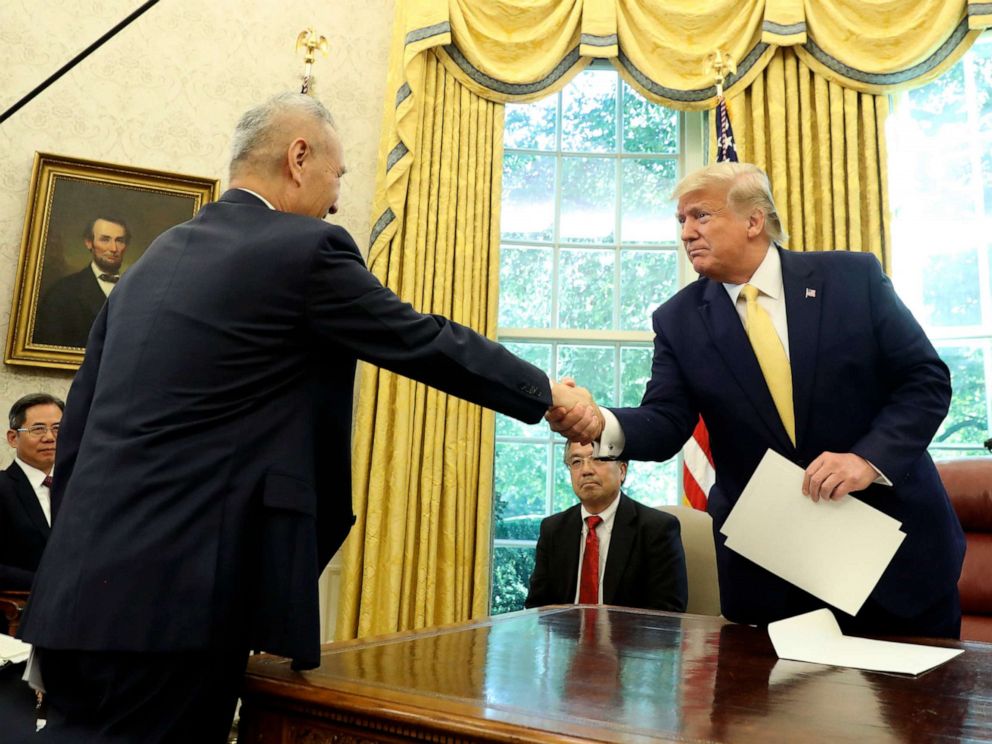 On October 11th, US President Donald Trump announced that a “substantial phase one” trade deal was reached between the US and China.

This essentially means that the outlines of a future trade deal were established. It is a sort of temporary ceasefire in the terms of actual war.

As part of the deal, China would significantly step up purchases of U.S. agricultural commodities, agree to certain intellectual-property measures and concessions related to financial services and currency, Trump said. China will purchase between $40 billion and $50 billion in U.S. agricultural products.

The U.S. suspended a tariff increase to 30% from 25% on at least $250 billion in Chinese goods that were set to take effect on October 15th. A tariff hike implemented in September was not rolled back and plans for another hike on December 15th remain in place.

On the same day, the White House released a letter from Chinese President Xi Jinping sent to Trump. 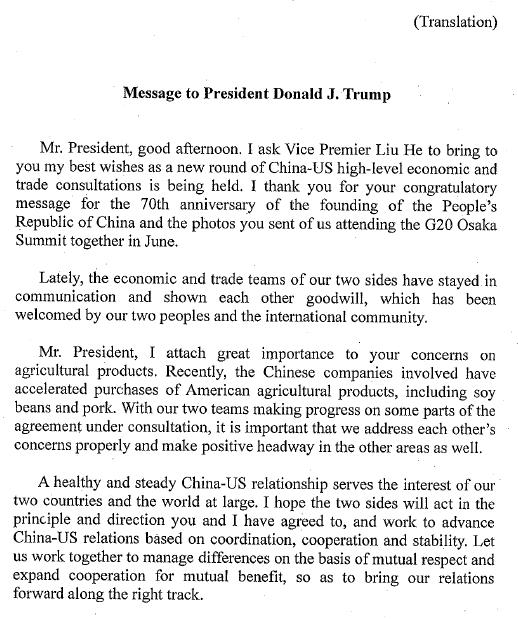 Xi told Trump that it was of importance for the countries to work together in order to address their concerns.

“I hope the two sides will act in the principle and direction you and I have agreed to, and work to advance China-U.S. relations based on coordination, cooperation and stability,” the letter said.

Talking about the latest round of consultations, Liu said the two sides conducted candid, efficient and constructive discussions on economic and trade issues of mutual concern.

For his part, Trump expressed his appreciation of Xi’s message, offered once again his congratulations on the 70th anniversary of the founding of the People’s Republic of China.

“While the negotiations do appear to have produced a fundamental understanding on the key issues and the broader benefits of friendly relations, the Champagne should probably be kept on ice, at least until the two presidents put pen to paper,” China Daily reported.

In an opinion piece entitled “Let’s nail down ‘phase one’ before moving to the next,” the official Chinese state-owned English outlet said that the US administration was prone to making unexpected turns in foreign policy, so it was early to celebrate.

“As based on its past practice, there is always the possibility that Washington may decide to cancel the deal if it thinks that doing so will better serve its interests,” China Daily said.

“The US should avoid backpedaling, as it has in the past, and instead cherish what has been achieved as a manifestation of a healthy and steady China-US relationship that serves the interests of both countries and the world,” it said.

Trump further said that “phase two” would follow immediately, but didn’t clarify what it would include.

The Trump administration also said issues related to Huawei Technologies Co. aren’t part of “phase one” and will be a separate process.

The Chinese tech giant, which was placed on an export blacklist in May, will be discussed in a second phase of the negotiations, the president told reporters.

The “phase one” agreement is significant, since for 18 months there’s been little progress. But it still fails to address many of the significant issues between the US and China.

It didn’t address intellectual property theft and technology transfer. It also doesn’t address “many other more sensitive areas” such as cyber security, as well as the above-mentioned Chinese tech giant Huawei and the future of the blacklisted Chinese companies.

On October 8th, the U.S. Department of Commerce added 28 new companies and agencies to its running “blacklist” of Chinese firms banned from doing business in the United States.

Christiaan Tuntono, senior economist for Asia Pacific at Allianz Global Investors said it was progress, but it wasn’t too promising.

“While this first-stage deal is called a deal, it does not remove the existing tariff burden on US-China trade or reduce the uncertainty faced by businesses in future US-China relationship,” he said.

Tuntono said the finalization of this first-stage deal could still be disrupted when it’s being drafted. “Further negotiation for the second-stage and other agreements can still be stalled with tariffs reinstated,” he added.

it was in the papers recently that china is to buy the entire russian production of soybeans so I guess trump all of a sudden had to get the american farmers back in the game, since china stopped buying american agri-stuff and trump has had to pay midwestern farmers billions upon billions in compensation for the loss of the chinese buyers. thus hurry hurry and get those pesky american voters back in as voters for trump.