A day after on Tuesday President Trump and national security adviser John Bolton publicly contradicted each other over whether Kim Jong Un has “kept his word” on nuclear and missile testing — with Trump affirming that the North Korean leader has indeed adhered to “no nuclear testing” and that “there’s no long-range missiles going up” — the US is out with new charges that North Korea has breached a UN sanctions cap on refined petroleum.

The US and allies submitted a formal complaint to the UN Security Council this week, made public Wednesday, accusing Pyongyang of conducting at least 79 illegal deliveries of fuel thus far this year, already surpassing an annual cap of 500,000 barrels. The United Nations in December 2017 imposed tight limits on North Korea’s ability to import oil and petroleum products due to its banned nuclear testing and missile program. 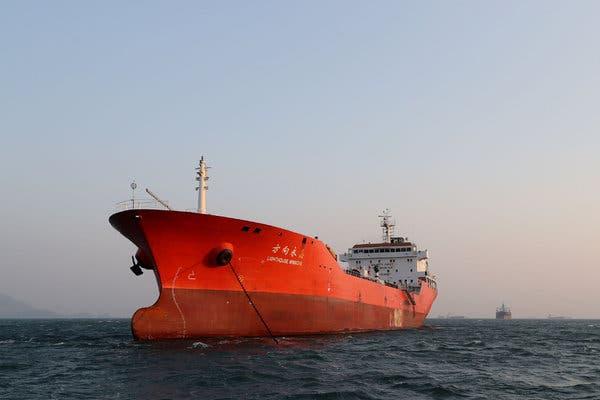 Yonhap via Reuters: The Lighthouse Winmore, a Hong Kong-flagged vessel suspected of transferring oil to North Korea in defiance of international sanctions, near Yeosu, South Korea, in late December.

“The restriction on the DPRK’s refined petroleum imports is critical to maintaining pressure on the DPRK, including those parties responsible for its WMD (weapons of mass destruction) program, to achieve the final, fully verified denuclearization of the DPRK,” states the formal complaint to the committee, dated Tuesday.

The White House is reportedly attempting to jump-start momentum for further talks now a year after Trump and Kim’s first historic face to face meeting on June 12 last year in Singapore.

Things got further interesting when on Tuesday Bolton told the WSJ that Pyongyang is not complying with the terms agreed upon during the Singapore summit. “What they’ve said was that they’re not going to test ballistic missiles, intercontinental range ballistic missiles, or have nuclear tests. That’s continued. They’re doing a lot of other things that still indicate that they have not made a strategic decision to give up the pursuit of deliverable weapons, which is why we continue the maximum pressure campaign,” Bolton said.

However, hours later Trump contradicted his own adviser (to be sure, nothing new), saying of Kim: “He kept his word. There’s no nuclear testing. There’s no large, there’s no long-range missiles going up. The only things he’s set up were very short term, short range. That was just a test of short range. It’s a whole different deal, but he’s kept his word to me. That’s very important,” according to CNN.

The north twice tested multiple short-range missiles early last month, which drove speculation over whether it was actually a banned long-range test.

Trump also controversially said this week that he will disallow CIA spying on Pyongyang while he’s in power. This after he was asked about a report that Kim Jong Nam, Kim’s exiled half brother, was a US intelligence asset who was later executed. “I would tell him [Kim] that would not happen under my auspice that’s for sure.” 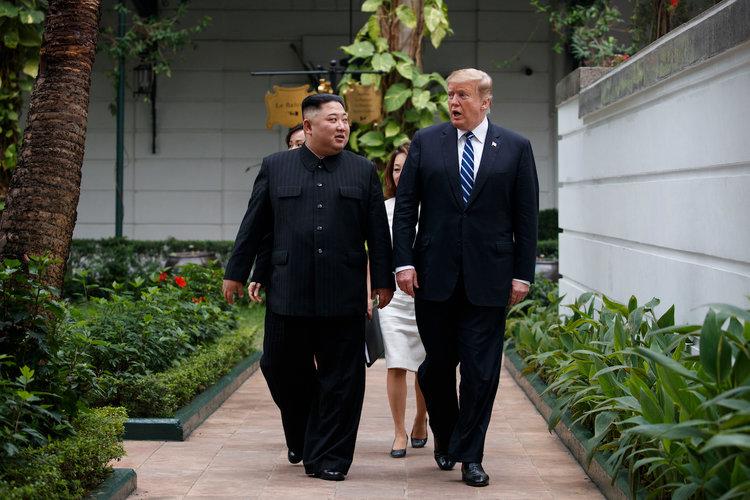 Concerning this week’s accusation before the UN that North Korea has breached its annual 500,000 barrel fuel limit, Pyongyang has long been known to engage in aggressive sanctions thwarting behavior, including conducting ship-to-ship transfers at sea. In response, for over the past year a UN group of countries including the U.S., Japan, South Korea, Canada, Australia, New Zealand, the U.K. and France, have patrolled a region in the East China Sea and around China and North Korea covering 700,000 square miles in order to clamp down on sanctions evading.

Recent reports have detailed North Korea’s use of increasingly advanced and inventive techniques to evade the oil sanctions, including manipulation of vessel transmission systems, physical disguise of tankers, illegal name-changing and other forms of identity fraud, night transfers, and the use of additional vessels for transshipment.

However, it remains that no nation would go quietly while being choked of its vial fuel and energy supplies, so we don’t expect Kim to receive the UN accusation too warmly no matter how much Trump praises his “beautiful” letter — clearly part of the administration’s continued carrot and stick approach to get talks going again.

that bolton is one seriously dangerous guy – would suggest some filthy rich middle eastern patriot or some filthy rich afghanistani opium war lord put a 10 million dollar bounty on his head, similar as the half wits in washington dc put on the heads of guys they don’t like.

Nonsense. Who is America to start charging countries? The world police?

US is opening too much fronts at the same time.. Venezuela, Iran, North Korea and as economic warfare China bit also Mexico and maybe soon the vassal states in western Europe.. too much..