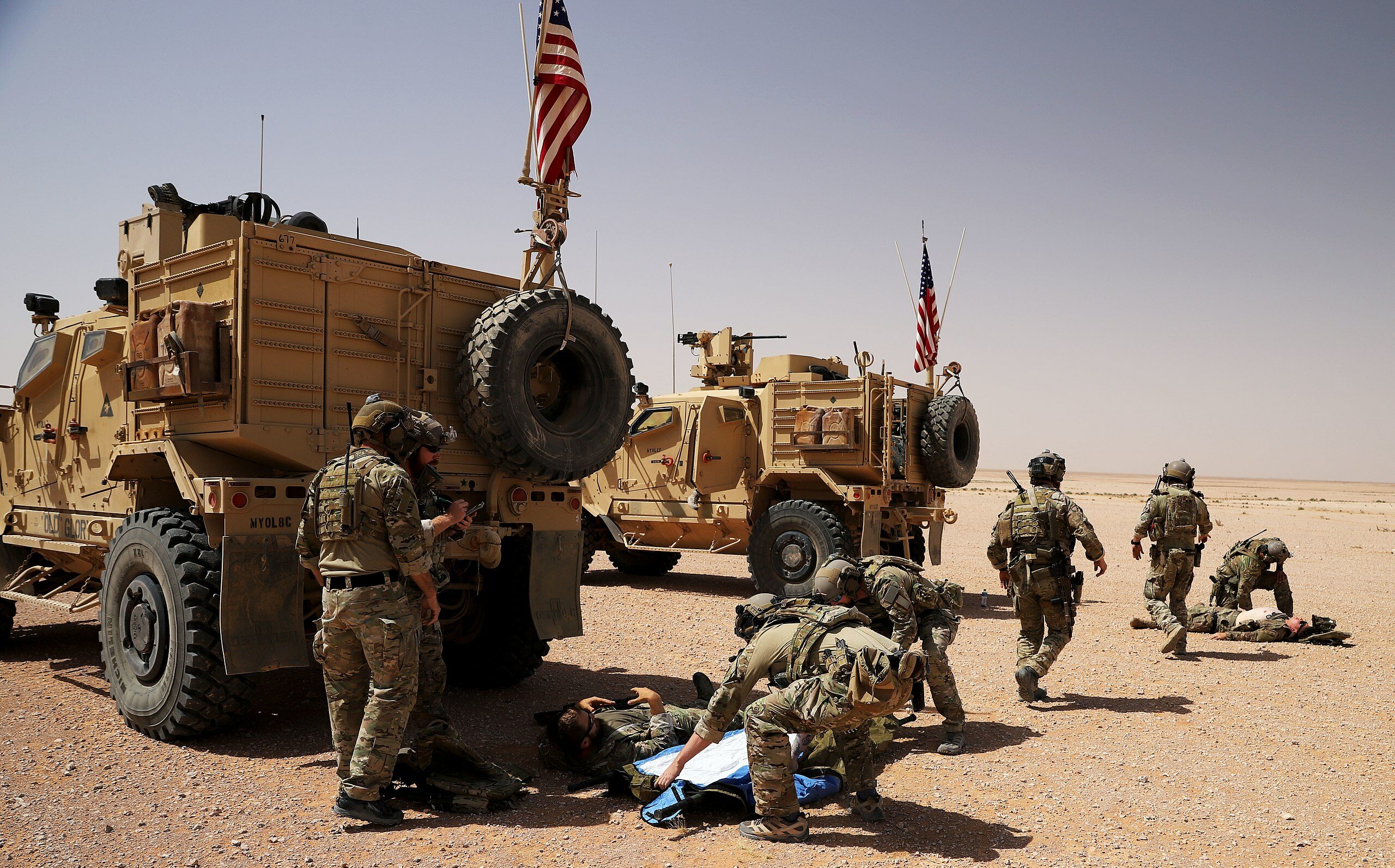 Green Berets conduct a medical evacuation exercise during a patrol within the 55km deconfliction zone in Syria, May 27, 2020. (U.S. Army photo by Staff Sgt. William Howard)

The US al-Tanf garrison in southeastern Syria was subjected to a “deliberate and coordinated” attack utilizing “drones and indirect fire [rockets],” the US Central Command (CENTCOM) said on October 21.

Capt. Bill Urban, a spokesman for the CENTCOM, said that the attack, which took place late on October 20, didn’t result in any injures among US troops. According to the spokesman, the CENCTOM is now working with its Syrian proxies to confirmed if they suffered any casualties as a result of the attack.

“We maintain the inherent right of self-defense and will respond at a time and place of our choosing,” Capt. Urban said in a statement.

Some 200 US troops are known to be deployed at al-Tanf garrison that blocks the Damascus-Baghdad highway. The US-led coalition maintains a 55 kilometers no-fly, no-drive zone around the garrisons.

The CENTCOM has not made any accusations, yet. However, many news sources said that the attack was carried out by Iranian-backed forces. The drones and rockets were simultaneously launched from Syria and Iraq.

Last week, the Allies of Syria Operations Room, which commands Iranian-backed forces in Syria, vowed to response “very harshly” to the October 13 Israeli airstrikes that targeted the outskirts of the ancient Syrian city of Palmyra. The airstrikes were launched from the airspace of al-Tanf.

The US will likely respond to the attack on al-Tanf by attacking positions of Iranian-backed forces in both Syria and Iraq, as it did on several occasions before. This may lead to a very serious escalation. Iranian-backed forces have proven time after time that they are more than willing to strike back.

“We maintain the inherent right of self-defense”

Actually you do not have any rights. You are illegally occupying Syrian territory and conducting terrorist activities from said territory against the people and government of Syria.

You should have ballistic missiles rain down on your positions that you illegally occupy.

Tanf needs to get what the Al Asad air base got in Iraq.

It isn’t Al Assad, it’s Ein Assad. Eye of the lion, if I remember correctly.

Whatever it is it got a wake up call.

Well no US soldiers died so all that for nothing. It’s not even acknowledged in the US press

They won’t report it in the US because they don’t want the herd of cattle to panic,many Americans are so retarded they probably don’t know their soldiers are in Syria.

The US press tells you only what the military wants you to hear so you are basically told nothing unless it is impossible to ignore so don’t rely on the USM telling you anything.

Fact is the attackers warned the base an hour prior to the attack. This was deliberate to signal deterrence to the Americunts that the next time they allow their base to be used in attacks on Syria, there will not be a warning.

Sometimes it is a just a word which upsets the bot watching which stops the post . Quite often it is an innocent word so try posting half the comment then the other half and see if that works. Might be it doesn’t like the web address ?. Quite often no rhyme nor reason .

I was trying to post that the Al Tanf attack was carried out by 4 Syrian AF Mig 29s adding some details.

That would be very interesting if it was the Syrian AF because that would be a game changer if it was. SAF would be well within their rights to do that as it is an illegal base but it is covered by the US AF in Jordan just down the road and from US bases in Iraq. The US could erect a base just across the border in Iraq and just as effectively control that Damascus-Baghdad road . Of course having their base there means no prying eyes to see what they are really doing same as the US base right up in the north east 20 kms in from the Iraq border and nothing else around . No one can see what they are doing.

Biden will tell you ” we have no troops in Syria other than protecting the oil fields from ISIS ( Assad ) so in reality there are no US troops in al Tanf as there are no oil fields within cooee of there and as such al Tanf can be bombed to remove terrorist groups from there.

Its a good start.