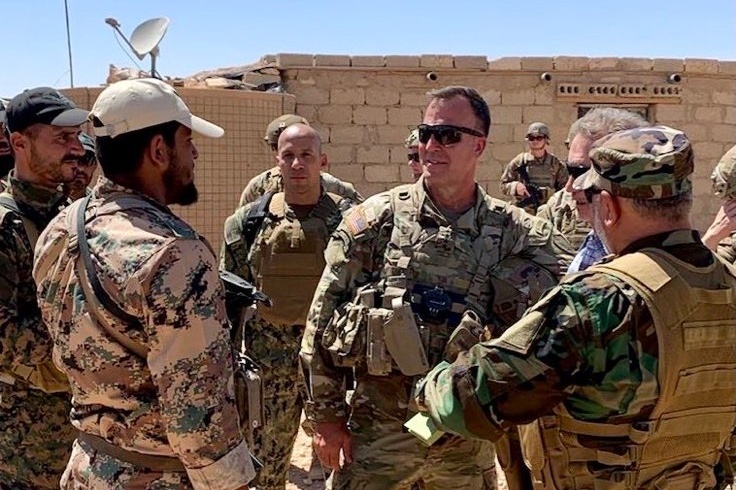 The commander of the US Central Command (CENTCOM) General Michael “Erik” Kurilla has paid a surprise visit to al-Tanf garrison in Syria’s southeastern region.

The CENTCOM announced the visit on July 16, without clarifying when exactly it took place. During the visit, Gen. Kurilla met with militants from the Revolutionary Commando Army (MaT), the US-led coalition’s main proxy in al-Tanf, and inspected a compound that was targeted by the Russian Aerospace Forces (VKS) in June.

“Gen. Kurilla spoke with MaT fighters at their compound which was struck by Russian fighter jets on June 7th and since repaired. The fighters assured the CENTCOM commander they remain undeterred and ready to fight,” the CENTCOM said on Twitter.

The Russian airstrikes, which were prepensely thought to have taken place on June 16, were reportedly a response to an attack by MaT militants that resulted in Russian military casualties. The US-led coalition was alerted ahead of the airstrikes, which caused material losses only.

Around 200 US troops and some 300 militants of the MaT are usually present at the garrison, which blocks a strategic highway that links the Syrian capital, Damascus, with the Iraqi capital, Baghdad.

The US-led coalition maintains a 55 kilometers no-fly zone around the garrison. Despite this, VKS warplanes conduct reconnaissance sorties over the area on a regular basis.

Gen. Kurilla was the second senior US officer to visit al-Tanf garrison after the Russian airstrikes. Brigadier Karl Harris, Deputy Commanding General of the US-led coalition’s Operation Inherent Resolve, paid a visit to the garrison late in June.

Recently, Russia and Syria accused the US-led coalition of sheltering and training terrorists in al-Tanf 55-kilometer zone. Terrorists trained there were allegedly sent to Syria’s central region to fight government forces with ISIS cells. There was also claims about some of them leaving all the way to Ukraine to fight against the Russian military that is currently conducting a special operation there. The coalition is yet to address these allegations.

What the f….. while the USA are giving the ukrainians weapons and target intel to kill as many russian soldiers and civilians possible russia is still warning the US Forces ahead so they have no casulties?

Just pull your forces out of syria and let iran handle it. They do not feel more pain when they hit US forces then when they lose their own men or civilians.

EXACTLY… And while you’re asking yourself that “question” Russia is invited by the sovereign government of Syria 8 years ago to offer it’s protection from an invading force that has been illegally parked in it’s Country since 2010!…

Why indeed does the Russian Federation put up with this BS and not wipe the “500 strong” American garrison when the U.S. has had advisors inside it’s cousin’s turf and on it’s borders since 2012 in Ukraine!?…

Word War III started in earnest 8 years ago, first with sanctions… then sabotage of it’s government facilities (inside it’s Country)… Invasion of it’s diplomatic properties in the U.$. after Maidan 2014… Murder of it’s high ranking diplomats and other intel operative we both know and don’t know about… And yet Russia keeps it’s seat at the UN whore h0u$e!?…

What is Russia waiting for?…

Russia could wipe out that base with two Kalibr missiles,Iran could wipe it out with ballistic missiles,the only thing to fear is fear itself,just do it.

Are you in dire need of a career change? Isn’t it frustrating to have to create budgets for everything in life? What if I told that up to $500 can be earned daily without stepping outside of your home, would you be interested? In fact, soft skills supposedly suffice to make… 𝐰𝐨𝐫𝐤𝟐𝟒.𝐧𝐞𝐭𝐥𝐢𝐟𝐲.𝐚𝐩𝐩

It’s not so much it’s that they are afraid, as it has to do with the price of physical precious metal holdings that the BOE and Federal Reserve “fix” at such a low price that Russian Central Bank and it’s Fifth Column just can’t “re$i$t”…

Ask yourself how palladium which the Russians have controlling interest in and the largest ore mines in the World was selling in 2008 for less than $300.00 a troy ounce that now 14 years later sells for over $2,000 a troy ounce?…

At the end of the day the 99% is a Pleb owned by banks and their energy corporations. I keep waiting for Russia to lead the way in restoring capital markets that will return to the days where commodity prices are set by the “markets” and not the banks… But I don’t see any difference between Russia and any of it’s UN associates while it’s military men and women are dying for that “change” and “freedom”!…

They slaughtered 240 of their cia/mercs them in ukraine for poking gods eye,there you go! media have a habit of missing out more important aspects like maybe they nailed several,but does the usa have the guts to admit when the russians hit them where it hurts,fk no! TRUTH IS UK/EU/USA ARE FRIGHTENED OF FAGGOTS WHY THEY BOW TO THEM NOT RUSSIA,drr!

Great opportunity for another airstrike: this terrorist should observe it personally.

If those hi Mars hit die brücke me thinks tang will get it too.

If USA and Erdoganistan (among others) arm Ukronazis to kill Russians, then Russia must arm Syrians, Iraqis and Iranians to kill Amerscum and Erdoganists in return!

What a missed opportunity

It has been quiet for too long.

Hope to see the Islamists kill each other in the tens of thousands as a start.

Contrary to your expectations, tens of thousands of rockets will end up raining on your “oy vey, much yisroel” shitskin hebrew state first.

Religions are the biggest deceptive scam created by mankind and still persist.

To me, it’s ridiculous entertainment to see religious worshipers fight and kill each other.

No need to pretend to be an atheist, shitskin hebrew. I can smell the sand off your filthy brown skin all the way from here.

Rambo arrived in Al Tanf, and declared the use of tactical nuclear bombs is now on the table because US red line was crossed. Innocent Americans were jeopardized and we have to defend our assets and our Constitution.

Perhaps VVPuTin has the MiG-31K Kh-47M2 combo in Syria.

You must be joking: Fauci and PedoPete decimated the Constitution of the United States with their illegal lockdowns and forced injections of poison.