Out of harm’s way!? Guess they are only meant to bully weak nations that can’t hit back.

Hmmm. Out of harms way. That’s what I was thinking. But are we sure this is accurate?

The accuracy of this can be brought under scrutiny (I personally don’t know if this is accurate or not) but from a strategic point of the view the US probably doesn’t want to bring its Aircraft carriers in range of the weapons that China, Iran and Russia posses.

If we take the hypothetical scenario of US attacking Iran the US would much rather just use its air bases then risk the possibility of an aircraft carrier being sunk (huge hit to both moral and budget). Russia has missiles that can absolutely decimate any surface the US currently fields on the sea. China has the DF-21D (amongst others) and Iran has 1,000s of Fateh class missiles ranging from 313,110 to Khalje Fars and the recent highly accurate Zolfighar, Mobin missiles all more than sufficient to either outright destroy current US surface warships or render them out of commission.

Losing an aircraft is a big hit to the national pride and prowess of the self-proclaimed strongest military in the world. Also it wouldn’t make much sense from a tactical point of view since Aircraft carriers are largely a relic of the WW2 and cold war era. They are amazing against nations that don’t have the ability to hit an aircraft carriers or military targets beyond their borders but US enemies today have that ability in spades and won’t hesitate to send 1,000 plus sailors to the bottom on the ocean along with a 10 billion dollar plus ship.

Realistically though the US would most likely anchor its Aircraft carriers out the known range of the enemy nations weapons in order to mitigate possible damage to its naval assets.

I agree. Don’t forget that Iran also has the new high speed torpedoes as well and given the right conditions could take out a carrier as well. Don’t underestimate their capabilities.
And given the supposed capabilities of Russia’s new weapons I don’t think there is an “out of range” for those carriers any more.

Agree. Read elsewhere that the USN Harry Trueman was just outside the Med.
Also ”out of range” is difficult nowadays, with targeting and weapons from the satellites!

Still in port, the yanks are broke.

There isn’t much point in keeping them overseas anyway, it was usually common for most of their aircraft carriers to remain near the continental US throughout the Cold War and ever since the 90s.

Either way, the effective use of camouflage applied to mobile air defense weaponry and other countermeasures can make detection from air and satellite reconnaissance rather difficult; the air war fought between NATO and Serbia in the late 90s is a good example of this, despite Serbia not having the technological advantage.

The NATO commander at the time was a Jewish-American named Wesley Clark who infamously stated:

“Let’s not forget what the origin of the problem is. There is no place in modern Europe for ethnically pure states. That’s a 19th century idea and we are trying to transition into the 21st century, and we are going to do it with multi-ethnic states.” ~ Wesley Clark.

And yet he hypocritically supports Jewish ethno-nationalism for Israel while he simultaneously supports diversity everywhere else and especially in the West, which isn’t surprising considering this position is shared by almost every Jew. Apparently they believe they are the only people in the world who deserve their own borders, which isn’t surprising considering the contents of their “religious” material. Their “religion” is just a mask for their supremacist tendencies, while Anglo-Saxons and other Westerners are among their many useful scapegoats.

[Despite being Philo-Semitic,
naively and disingenuously so in my opinion, Jared Taylor exposes the
Jewish hypocrisy and double standards in relation to mass immigration
and what they advocate for us in the West, and what they want for
themselves in Israel. In the West they want multiculturalism,
immigration, diversity, and
miscegenation, meanwhile in Israel they have some of the most
restrictive immigration laws, and frown upon any marriage between Jew
and non-Jew. The interviewer even admits that he would support banning
the arguments made by Jared Taylor invoking the holocaust narrative as
justification for curtailing free speech on the issues Taylor talks
about. The Jewish interviewer also said that he supports a world in
which there are no borders, but not when it comes to Israel
unsurprisingly.

This is an excellent interview to show those who deny that Jews support one thing for the West
and another for the Jewish state of Israel. They are Zionists for
Israel and Multiracialist advocates for Western nations. The idea is to deconstruct homogenous European nations in their own group interests.]

“wasn’t uncommon for most of their aircraft carriers to remain near the
continental US throughout most of the Cold War and the past few decades.”

Even if they were not in US home waters for 49.9% of the time, they were technically at home around this time. Either way regardless of whether or not either of us is right or wrong, there are nicer ways of saying that.

Although here’s an example of something you’re certainly wrong about and too stubborn to look into, mostly as a result of the misinformation people are fed from early childhood and throughout their entire lives.

Naturally there are rude and inconsiderate cretins who will slander anyone who dares to challenge the current cult-like status quo while pointing this out, they prefer to take the lazy way out and cling to their narrow-minded ignorance and choosing to allow middle men to tell them what’s what, rather than going directly to the source and look into it from an objective perspective.

“To learn who rules over you, simply find out who you are not allowed to criticize.” ~ Voltaire

This is a much more civil and pragmatic thing to do instead of foolishly labeling and slandering anyone who openly disagrees with the “official” state sponsored WW2 and holocuast narratives, and if these “revisionists’ truly were wrong, then it wouldn’t be illegal to question these narratives in 17 countries and both sides would be given equal representation. If they were given fair and equal representation, it would deal great damage to the NWO which includes not only the Western world and other places around the world, but also Russia and China as well.

Here’s something you accused me of being “brainwashed” about:

The oldest known use of the ancient swastika symbol are from artifacts unearthed in eastern Europe at a time where the ethnic makeup of the area was quite different than it is today. Although they were still White skinned Caucasians, they weren’t all Slavic. Obviously these artifacts predate the use of the swastika symbol elsewhere in the world, curiously the swastika symbol has also been found on artifacts and tomb paintings made by the Aztecs, Incas, and Anasazi (Native Americans the American four corners region) prior to Christopher Columbus’ voyage to the New World.

[A pottery fragment with the image of a swastika, dating to 7,000 years
ago, and an ancient female adornment with a phallus are among the
artefacts shown for the first time as part of the on-going exhibition
“Gods, Symbols and Ancient Signs” in the museum in Vratsa in
north-western Bulgaria.

If you want to see just how deeply rooted the
swastika pattern is in Europe, a good place to start is Kiev where the
National Museum of the History of Ukraine has a small ivory figurine of a
female bird. Made from the tusk of a mammoth, it was
found in 1908 at the Paleolithic settlement of Mezin near the Russian
border. On the torso of the bird is engraved an intricate pattern of
joined up swastikas. It’s the oldest identified swastika pattern in the
world and has been radio carbon-dated to an astonishing 15,000 years
ago.]

Where Did Blue Eyes Originate From?:

http://atlanteangardens.blogspot.com/2014/04/where-did-blue-eyes-originate-from.html – The Aryan “invasion” theory is not invalid, not to mention the blue-eyed statues, figurines and burial masks dating back to ancient times (Sumerian civilization, ancient Egypt, Buddhist art work, ancient Sanskirt text, and the Incas among others).

And of course they weren’t gods, these are merely ancient myths that accompanied a number of civilizations. If you look into the Japanese foundation myth, you will find some pale skinned “deities” and the widespread belief in Japan to this very day that the Japanese imperial family is semi-divine. Furthermore, Japan’s ruling class has a lighter skin tone on average compared to Japan’s lower and middle class.

It is now believed that Japan’s upper class are the distant relatives of the Ainu people who traditionally inhabit the Hokkaido prefecture and the Russian territories of Sakhalin and the Kuril islands. Furthermore, archaeological evidence combined with DNA samples and carbon dating reveal that the Ainu are the descendants of White Caucasioids who mated with far-east Asian Mongoloids. Although DNA evidence has also proven that the Native Americans are also the result of miscegenation between Europeans and far-east Asians who began crossing what is now the Bering Strait around 24,000 years ago.

The DNA of a number of Egyptian mummies:

Daniel Radcliffe in the hollywood portrayal of “skin heads”. For anyone to throw such a slanderous, including “nazi”, for merely challenging the status quo is not only narrow-minded, but also a reflection of the accuser’s ignorance of the topic:

– “The decisions of the Talmud are words of the living God. Jehovah
himself asks the opinions of earthly rabbis when there are difficult
affairs in heaven.” ~ Rabbi Menachen, Comments for the Fifth Book

– “Jehovah himself in heaven studies the Talmud, standing: he has such respect for that book.” – Tractate Mechilla/Me’ilah

– “To communicate anything to a Goy about our religious relations would be equal to the killing of all Jews, for if the Goyim knew what we teach about them, they would kill us openly.” – Libbre David 37

– “A Jew should and must make a false oath when the Goyim asks if our books contain anything against them.” – Szaaloth-Utszabot, The Book of Jore Dia 17

– “Because the Talmud conspires against gentiles, if a Jew was ever
caught telling a gentile what the Talmud really says, such a person
deserves death.” – Jewish Encyclopedia “Gentile” (p. 623)

– “If a non-Jew studies the Talmud, he is subject to the death penalty.” –, Moses Maimonides, Mishneh Torah: Yad Hachzakah (10:9)

[PM mourns “one of the great Torah sages of our generation”; Lapid, Bennett praise Yosef but Sarid says he won’t forgive him.]

– “A Jew should and must make a false oath when the Goyim asks if our books contain anything against them.” – Szaaloth-Utszabot, The Book of Jore Dia 17

[PM mourns “one of the great Torah sages of our generation”; Lapid, Bennett praise Yosef but Sarid says he won’t forgive him.] 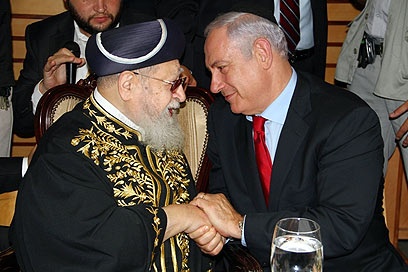 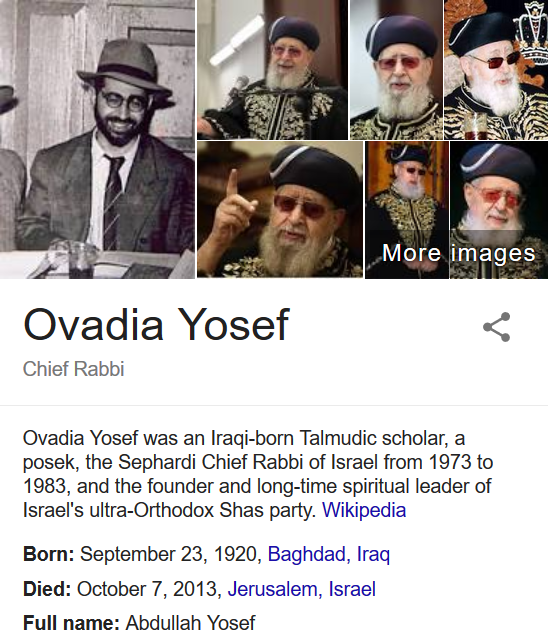