The US envoy to the UN believes that the US serves as “the moral conscience of the world,” and the UN should be “an effective tool on behalf” of American values. 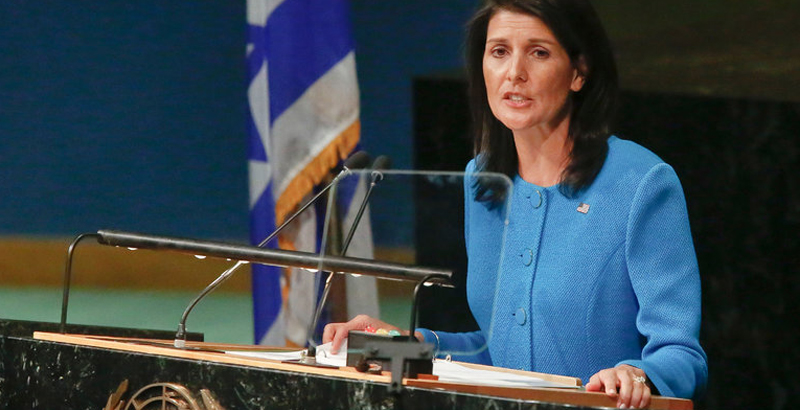 Nikki R. Haley, the US ambassador, speaking at the UN on Wednesday (Photo: AP / Bebeto Matthews)

The US serves as the conscience for the whole world and is not going to abandon this role, US envoy to the UN, Nikki Haley said.

“The United States is the moral conscience of the world. We will not walk away from this role. But we will insist that our participation in the UN honor and reflect this role. If we can’t speak on behalf of people like Mohammed and Neda, then we have no business being here,” Haley said on Wednesday.

“It’s past time that the Security Council acknowledge the importance of human rights abuses and demand that its member nations do the same,” she noted, adding that “human rights abuses can lead to a breakdown in national peace and security.”

According to Haley, she is going to make the world organization an “effective tool” for promoting American values. “I came to the UN with the goal of showing the American people value for our investment in this institution. And when I say “value,” I’m not primarily talking about budgets. I’m talking about making the UN an effective tool on behalf of our values,” the US envoy to the UN said.

Meanwhile, spokeswoman for the Russian Foreign Ministry, Maria Zakharova, has become indignant at the Haley’s words and noted that every time after the next action of the “US conscience” Russia has to “derive the world out of pique.”

“Now, it is clear what is happening on the planet: after the next action of the American CONSCIENCE, Russia each time has to strain the brain and derive the world out of pique,” Zakharova wrote on her Facebook page, commenting on the Hayley’s statements.

The spokeswoman for the Russian Foreign Ministry also noted that the UN is a chance, given to the humanity to prevent new world wars, but not a tool to promote American or somebody else’s values. “And the worst thing is that the US representative to the UN believes that the conscience is a role,” Zakharova concluded.

In addition, she added that if to analyze results of the recent US foreign policy, it can be assumed that Washington is more suited for the role of another world body.

Nikki Haley needs to be placed in a mental institution, and fast

Like any large organization , the left hand does one thing , while the right hand does the opposite . In Syria the CIA funds and arms jihadists , while the US military fights them ( ISIS ) .

A classic case of mental illness .

First America must become consistent about what its “values” are .

What ‘Values’. They have none.

If you allow a slight correction: US Military DOES NOT fight the ISIS, it’s providing air support for ISIS ground ofensives. And that is a fact! They NEVER bombed a single conwoy of ISIS oil going to Turkey, they actually protected their corridor. They NEVER bombed a single ISIS military base, the ”mistakenly” bomb the positions of Syrian Army, and after their ”mistakes” ISIS regularly makes advances on the ground.

Which “American Values”??? Give a damn on international law, rob other nations, kill indiscriminately, spy on everybody, spread propaganda – and all because the US has the stronger military? Satanic values indeed!

1. Support Saudi Arabia’s starvation blockade of Yemen, check. 2. Support rebels against Syria, a member state of the U.N., check. 3. Destroy the standing govt of Libya, check. 4. Support the KSA’s suppression of the popular will in Bahrain, check. (short list) She and Samantha Power are deranged.

You missed about 40 or 50 others, but that about sums it up. Trying to figure out the exact nature of evil in Haley and Powers. Are they really psychopaths themselves, or just delusional cult-like followers of the church of neocon and it’s psychopathic leaders? I would suspect the latter because they seem more like parrots than prophets. Probably just as dangerous.

American values? As in “There’s a sucker born every minute”

MORE LIKE THERES AN AMERICAN SUCKER BORN EVERY NANO SECOND. WITH A DERANGED CLOWN RUNNING OUR PATHETIC NATION, THE REST OF THE WORLD MUST THING AMERICA HAS BECOME CERTIFIABLE. WE HAVE BECOME A NATION OF SUB-SPECIES…

Who the heck are Mohammad and Neda?

Nikki Haley is a Foreign Agent

Key words are “…making the UN an effective tool…”

With the US track record over the last seven decades claiming to be the world conscience is truly chutzpah. It also makes clear that the US is still quite unwilling to face its past.

If on my conscience I had a millionth of the things the US did only since the W Bush administration I’d put a pistol to my head from the guilt.

This Nikki Haley is brain-damaged, brain-washed, mentally deranged, delusional and a hypocritical talking head. American “moral conscience” is reflected in American society which is a very violent, crime-infested, mentally and physically sick jungle. US foreign policy is a reflection of US society.

ACTUALLY NIKKI WAS LIKE THE NEIGHBORHOOD PUNCH BOARD WITH HER MANY LOVE AFFAIRS. NO WONDER THE DONALD TAPPED HER FOR HER CURRENT POSITION, THERE ARE MANY THIS PISS ANT CAN HIT ON…

WHAT A LAUGH A MILLION LAUGHS,I AM AMMUSED FOR YEARS TO COME,THIS LAUGH IS BETTER THAN A MILLION TOM AND JERRYS ELMER FUDDS SYLVESTER CAT WODDY PECKER BUGS BUNNY ALL PUT TOGETHER AND MORE,YOU CANNOT DROWN YOUR MURDEROUS DEEDS IN YOUR HISTORY FROM NATIVE INDIANS JAPANESE CIVILIANS VIET NAM IRAQ SYRIA AND OTHERS,REMEMBER HISTORY BABYLON PERSIA GREECE ROME OTTOMAN BRITISH AND YOUR IS Coming MMING FOR SURE SURE SURE

I think im going to puke

It only confirms one thing why USA is represented by women in the UN. They’re better LIARS than men and their secret is they believe in their own lies. Look at Hillary Clinton, Albright, Samantha Power and so on.

with a moral conscience like that who needs enimies?

USA Zionists are fools, sorry to come down to their level, but Killing so many in so many wars, Indigenous Of Americas, Africans, Hiroshima Nagasaki, Yemen, Iraq, Afghanistan, Syria, Palestine thru USA little brother Israhell zionist. South America deaths and what not. The Planet should rid itself of the USA for good. The world will be a better place for sure and then the UK should leave with France and NATO then this planet will be safe and will heal.

Americans are full of “exceptionalism.” It kills and maims: Iraq, Syria, Afghanistan,Libya,Somalia, Serbia,Argentina……….

If – or rather, when – the diplomatic schtick doesn’t work out for the boorish Ms. Haley, she should really consider a career as a failed comic as her next endeavor.

Scientific polling names the USA as the greatest threat to world peace on the planet.