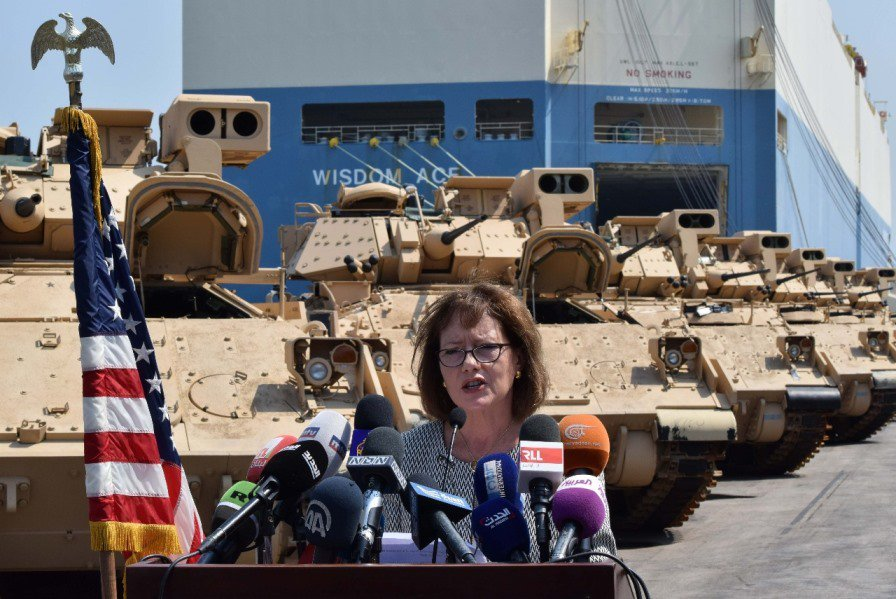 On Monday, the Lebanese Armed Forces received 8 M2A2 Bradley Infantry Fighting Vehicles (IFV) from the US, according to an official statement by the US embassy in Beirut.

The M2A2 model is also equipped with a 600 horsepower (447 kW) engine and an improved passive armor with the ability to mount explosive reactive armor. However the ERA boxes were removed from the ones delivered to the Lebanese Armed Forces.

“We are here at the Port of Beirut to mark the delivery of eight M2A2 Bradley Fighting Vehicles. These are the very first of a total shipment of 32 Bradleys that will be delivered in the coming months,” US Ambassador to Lebanon Elizabeth Richard saidduring the handover ceremony. “This contribution to the Lebanese Armed Forces represents an investment of over 100 million dollars. It will provide the Lebanese Armed Forces with new capabilities to protect Lebanon, to protect its borders, and to fight terrorists.”

According to Richard, Lebanese soldiers will be trained to operate and to maintain the vehicles by the US. Richard also reveled a list of weapons supplied to the Lebanese Armed Forces by the US in the last 12month. The list includes:

What is US upto? I fear for Lebanon. When US tries to become too sweet to a country and wins their trust then they backstab them and that country generally ends up like Libya, Syria, etc

You are absolutely right! God bless you!

Poor Lebanon.It should learn never to accept such poisonous gifts from the Americans.

Yet Russia makes better weapons at much lower costs! Lebanon can still buy them from Russia if they wanted to, with or without US weapons.

In fact Lebanon, Egypt, and India should hand them over to Russia for evaluation and possibly for “maskirovka” military deception at some point.

How is it “leverage”? If the weapons are given as aid, the only “leverage” is that the continued supply could be halted, at which point Lebanon could seek other suppliers.

Don’t you think that there is something about to be angry about ??

Or maybe, you get weapons by taking a picture ???

USA has given israel 36 billions of modern weapons and they give arabs this shit and these stupids buy it. No excuse. Stupid people will be wiped out. No excuse.

israel will have dozens of F-35, paid by American goyim and damn Lebanon will have an armed cessna paid by Lebanese stupid people. XD.

They’ll fall apart in the air when used in any real conflict. F-35s are more of a curse than a blessing for any country, so rejoice that Israel is receiving them. The only real danger is their ability to evade detection by high frequency radars (X-band). Russia should lease the 91N6E “Big Bird” panoramic radar (used with the S-400 system) over to Syria at 0-1 % interest for improve the SAA’s detection of aerial threats.

LOL! I did get a chuckle at the “armed Cessna” item!

Iraqis have bought these “armed cessna”. Very effective as you can see. XD.

Then why Israel not demand for that from US its a mater of thinking. Because that is not capable of modern war.

israel want F-35 to bomb Palestinians and SAA soldiers. israel is nothing without USA.

I don’t know why the iraqis and lebanese are buying this shit. Like I said so many times, they are just stupid. You didn’t know that a British or an American sold to iraqis fake bomb detectors. These detectors were ball golf detectors. And the iraqis was using them to detect bomb even if it was usless. Of course, surely many iraqis have dioed because of that.

Like I said so many times to people “stop being stupid”. But most people can’t.

No good will come of any of this.

How much does anybody want to bet that part of the “package deal” is that the Lebanon gov’t will declare Hezbolla a “terrorist organization?”

Not possible because Hezbollah is part of the government. The other part are just loosers and stupids and traitors (called garbage)

I am sure the US can turn these weapons to dead weight remotely..you know in case of Israeli invasion of Lebanon

Not really, because most of the weapons on the list are low tech (mortars, rifles, etc). I find the most interesting part to be “secure communication radios”, and that their “security” will be crucial.

All I can say is that Hezbollah must rely on Assad and Iran. Nobody will help Hezbollah otherwise and surely not sunnis and christians lebanese.

Isn’t that funny. The stupid lebanese army bought useless weapons from their US ennemy at the end of the war and blame Assad whereas without Assad and Hezbollah, ISIS will have reached Lebanon coast and destroy all their homes. And this “general” will have flee to USA. XD.

Beyond stupidity. Once you reached the stupidity frontier, talking means nothing.

This “aid package” is not worth the paper it’s printed on even if someone uses it to wipe his behind with. It’s Neocons trying to pit Sunni against Shia – again – in Lebanon – again. Remember general Clark’s list of nations to be destroyed by US/Zio war machine. Lebanon is right there, just after Syria. That grease haired buffoon Hariri is just the worm for the job. An “honorary” Lebanese born and raised in Riyadh, Saudi Arabia with most of his property outside Lebanon. Once he restarts the shitshow he’d be able to run back to his Saudi owners – letting poor people in Lebanon to be bombed by everybody and his cousin – again. And having Saudi citizenship he is technically owned by the Al Sauds – how convenient…

Come on. Hariri is sunni and Geagea is christian. Geagea is a genocider. Sunnis and christians are worthless.

very insightful , you rightly pinpointed and evidenced the main (and unofficial) motivation in the light of US globalist (zionist) politics.

US/UN political leverage against Hezbollah. …with Lebanon and Army forced to oppose Hezbollah. One Avenue this may occur is the airspace and roads…which Lebanon Gov/Military can monitor . Hezbollah is trapped…if laws about moving of weapons are enforced. Eventually Hezbollah and Lebanon Army fight….it becomes a legal violation which US and Saudi can use to more directly support Lebanons Government. Hezbollah would be forced to defend some annex in South Lebanon, Which suddenly becomes illegal. …as Lebanons Sovereignty suddenly matters to Uncle Shlomo.

Now, I understand Hezbollah. When you are surrender by such stupid people, you can only make your own way !!

As usual the US makes the same mistake, thinking that if you supply an army with ‘modern’ equipment and advisors it will magically become a good army. They’ve tried it with every Arab army, Egypt, Iraq, Saudi Arabia. They even tried it with Georgia, Ukraine, and of course their pet FSA groups. And then they wonder why when push comes to shove those armies still suck. Good kit and trainers do not overcome centuries of a culture full of corruption and nepotism.

Maybe they should talk to the Iranians, as they seem to have been the only ones who managed to turn an Arab army into a fighting force capable of fighting a conventional war with Hezbollah. Even the Russians had some success turning elements of the Syrian army from utter shit into moderately decent. Hell, even the coalition between Islamist fanatics and former Saddam military and intelligence personnel that created ISIS managed to create a decent Arab army.

Maybe the key seems to be to actually understand and be intimately familiar with Arab culture?

I don’t think that the goal is to create a good army, but rather to get rid of some equipment and spend money on buying some more.

Whether that will work remains to be seen. See my original post for that.

Well modern meaning old used surplus equipment which generally it supplies , they used to sell all their old equipment to allied nations and they got tired of unserviceable equipment which the US was famous for getting rid. Why the Licenses were sold to their Firearms since they no longer sold them internationally.

Since when USA want allies ? XD. They give them (rather they sell them) these useless weapons to make political gains. USA doesn’t give a shit about Arabs. They have killed so many of them.

Hezbollah must be very pleased to get arms from any which way? Hehehe; Even if, it comes from Israel’s friend and, from a country like terrorist supporting , which turns around and calls them” terrorists??