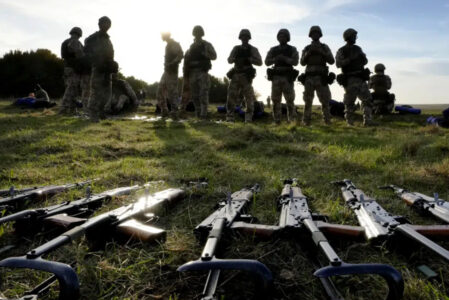 Gen. Milley says the US plans to train 500 Ukrainians over the next 6-8 weeks

Chairman of the Joint Chiefs of Staff Gen. Mark Milley told reporters on Sunday that the US has begun its expanded training program of Ukrainian soldiers in Germany, representing Washington’s ever-growing involvement in the war.

On Monday, Milley visited Ukrainian troops being trained by Americans in Grafenwoehr, Germany, sending a message of how important the training program is to Washington.

Up to this point, US training of Ukrainians has focused on specific weapons systems, but the new program is being called “combined arms” training. The Ukrainians will be taught how to coordinate battalion-sized forces using combined artillery, armored units, and ground troops. Ukrainian forces have been undergoing similar training in Britain.

Milley said the initial goal is to train a battalion of about 500 troops and get them back on the battlefield in about six to eight weeks. He also said that the US hopes to deliver new weapons and equipment to Ukraine in time for them to use it “sometime before the spring rains show up. That would be ideal.”

Milley said the US was doing a similar type of training for Ukrainian forces inside Ukraine before Russia’s invasion. The US withdrew troops that were in Ukraine before the invasion, although the Pentagon said in October that US military personnel based at the US embassy in Kyiv began “onsite” weapons inspections in the country.

The Intercept reported in October that US special operations forces and CIA operatives are on the ground in Ukraine, but the Pentagon hasn’t confirmed the covert presence.

The Pentagon is also set to begin training Ukrainian troops on the Patriot air defense missile systems, which is set to take place inside the US at a base in Oklahoma. Since Russia invaded, the only known US training of Ukrainian forces on specific weapons systems has taken place in Germany and elsewhere in Europe.

Russia just needs to kill them faster than they can train them.

Ostensibly, Russia is, Ukraine lost 70% of 4000 some troops as they were retreating from Bakhmut area supposedly, if 4k troops cannot do it, then 500 is meaningless. 6-8 weeks for a group big enough to require a mass grave? at some point Kiev needs to stop sending these men to their deaths.

500 troops, combined arms training, seriously. More cannon fodder to be ground up, all that training will be a waste since those conscripts probably won’t even last a month.

Yes, perhaps the slow SMO is brilliant, Russia is learning how to counter NATO as the weapons slowly get heavier but in numbers that won’t make a defences. Perfect for training purposes

The tragedy is that whatever the casualties are now the real killing times start as the army collapses. The Russians stymied the superior German army from 1941 to 1943 and once they gained the upper hand the German army really suffered and the KIAs and MIAs skyrocketed. I’m fearful that the tipping point is coming soon to Ukraine and thousands will die needlessly regardless of NATO weapons and training.

It’s not needless. They need to die as long as they support the US proxy war against Russia.

DenaZification was always the goal. That Russia failed “to mention” that the process of such denaZification meant defanging naZis all the way to BrUSsels, Berlin and the Washing town sewer is moot.

Hohol the Hater
Reply to  Martillo

Yes indeed because we see Russia drawing 300.000 conscripts – and then we see the US training 500 UKR troops to counter the Russian military build-up. Guess who’s gonna win this war ?

So here withz this again we all can see it very clearly that this whole war is just fake, it’s a set-up, a pre-decided great hoax, a show in which lots of innocent christian young men are sacrificed for the benefits of their enslaved, jew-controlled countries. They (these young christian men , may they be russian or ukrainian), are sent into the arena same as the gladiators back in old rome, to stupidly slaughter each other.

It’s only the jews, who benefit from this bloodbath. Selling weapons to both sides, laundering and stealing tax-payers money from both sides etc. etc. Moreover, with this war they want to initialize WW3, their Chabad Lubavich messianic Armaggedon, and btw. they want to hide their jewish orchestered poison-genocide, resp. the mountains-high number of mRNA-so-called “vaccine”injection related deaths beneath the mountains of corpses of then WW3.

it tipped quite some time ago, the entire plan is to denazify the ukrainian forces militarily. This is being achieved every single day it goes on. killing as advertized.

The war colleges of Russia are going to have dramatic changes to teaching and doctrine over the next 20 years.

training 500 people in 6 weeks :) yeah those will be real PRO soldiers that can make a difference … poor people, sent to die with no chance

500 troops in two months. Out of an alleged million-“man” army of the failed Ukrainian CIA project. Klown World prevails.

yes, what ever happened to that “Million man army”? sure did fizzle out quickly…

Training them in the Ukraine didn’t work out so well. Hey I got an idea! Let’s train them in Germany that’ll be a whole lot better. Less noisy bombs going off as a distraction, easier to concentrate and learn more……. BRILLIANT!

It might be a better place to train because of those flavorful spicy meat and rice dishes brought in by those Turkish and middle eastern immigrants. Not to mention the pita bread.

Jens Holm would agree with that. He thinks this multi cultural western Europe is just great. Putin is just lucky they didn’t train them in Denmark. They’d learn everything and then some in that place.

Last edited 20 days ago by The Crunge
10
Reply

More than one million Iraqi citizens died based upon the massive lies of the Uk and the Western countries. Perhaps since more than just their feelings were hurt, the entire “alliance” of military aggressors (that’s what it’s called when someone invades based upon lies) can submit worldwide apologies, and maybe a small sum of hslf a million dollars per Iraqi dead, on a daily basis. As a form of public apology of course.

Since the events of September 11 were blamed upon the Afghanis and millions of them also died from another military aggression, Harry can issue a daily apology and half a million dollars for every one of the Afghani patriots defending their homeland from foreign invaders and aggression as well. When human beings are killed by a foreign invading army (again based upon lies) and without justification, more than simple feelings are hurt. So 25 Afghani families should receive apologies and financial compensation.

If they’re being trained by the globohomo U.S. NATO military, expect to start seeing dead Ukrainian soldiers on the battlefield in a few weeks wearing androgynous body armor and LGBTQ rainbow badges.

In other news the Zelensky transgender regime is falling apart, Oleksiy Arestovych, Zelensky’s chief propagandist resigned for telling the truth about the missile that struck the residential building. Remember folks if you tell the truth in Zelensky’s regime, you’re fired.

“Gen. Milley says the US plans to train 500 Ukrainians over the next 6-8 weeks” At a killing rate of 300 a day they will last for 2 days. Nice attempt though.

All the yanks can teach the ukies is how to die for Israel.

Poor fools , they’re about to give their lives for the neocon puppet masters across the pond .

Is ‘loading body bags’ part of the course? I highly doubt Russia would care if the hardware they are destroying holds many warm soldiers from any part of NATOville. NATO’s war and they are the last to join in, OMG. That is a good sign Brussels will be surrendering the same day Russian begins its air assault on the country.

The US and NATO have been training Ukrainian troops for the past 8 years, not sure what value that has, being trained by the people who shamedly fled Afghanistan, I think it would be more appropriate for the Yukies to train the Yankees…..

The collap$€ of the North Amerikan Terror Organ, that flaccid and diseased limp dick that was supposed to rape Mother Russia, in fast evaporating rump Ukrapland, has proven beyond a doubt that Natostan and the angloZionaZi empire of transgendermutant retard filth is not long for this world. The morally, spiritually and financially bankrupt “West” is being flushed down the crud caked bowl of its disgUSting history in slow motion by the unstoppable Russian Bear. Will the Euro Peons rip off the stinking USSAN albatross before the rotten fowl takes the once sovereign nations of Urupp down the sewer with it? As long as the current filth “run” the Davos pedovore horror show expect the worst and you will not be disappointed.

500 is only enough to make a massacre out of them.

Pretty much how to die slower,either way this assures lower than average lifespan eg: vs =Z=

The Ukrainians ought to be training the US military, they fight a hell of alot better than them 🤣🤣🤣🤣🤣🤣

just issue them with Ye brand NIKE sneakers they will be able to run away from the gear u supply, faster. 10 yr old african boy soldiers have more martial capabilities than the entire ukrop “Army”

Boss of Wagner PMC has remarked than new ukrainian and EU sanctions will make it difficult for Russia to aquire ammo and spare parts for the 777 howitzers they have captured along the way.

Nice, these “Stocking stuffers” should be in rubber zip bags in less time than it took to train them to die.