The USA and Russia have started talks about cooperation in Syria. Most important point: Washington is abandoning its demands to quickly oust president Baschar Al-Assad. This is pointing towards a diplomatic solution for Syria. 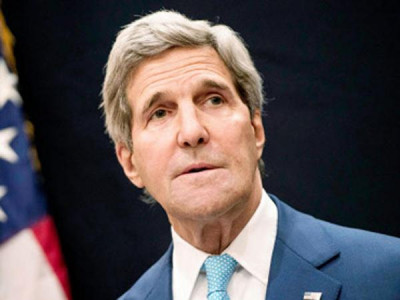 The secretaries of defense of Russia and the USA have discussed options to end the Syrian civil war. Ashton Carter and Sergey Shoigu held a 50-minute long phone call where they agreed upon measures for solving the conflict and further discussed how to fight the terrorist militia ISIS, the US department of defense told on Friday. It was the first time in over a year that the representatives of both countries directly talked to each other. The ministry of defense in Moscow declared, according to news agency RIA, that they came to an agreement in most points.

The most important point of the talks: The US-Americans are backing away from their demands of an immediate removal of president Bashar al-Assad as the central goal of the conflict. US foreign minister John Kerry put his new position like this: A solution to the conflict would only be possible if Assad would be removed from power in the long-term. US-president Barack Obama was rumored to have insisted on a cooperation with the Russians.

Russia took the initiative a few weeks ago: foreign minister Lavrov talked to several Syrian opposition leaders. The Russians do not want to cling to Assad but they oppose the removal of a democratically elected president.

Moscow already made a proposal in the year 2012 how to reach a peaceful solution through elections. The West rejected back then.

The Russians considered the following US military offensive a failure. Now it could be possible that the superpowers are striving to not only resort to a military solution but also to a civil one in the fight against ISIS in Syria. The military actions by NATO fueled the civil war and led to massive refugees flows that were driven out of the country. Kerry mentioned the refugees for the very first time on Tuesday and called it rightfully a consequence of the Syrian war. It looks like the US-Americans are realizing the huge problems the EU is facing if the refugee crisis is not ended quickly.

In recent weeks the NATO-alliance was becoming more and more fragile: Lastly even German foreign minister Steinmeier insisted that a solution would only be possible with Russia. Austria demanded an exclusive participation of Assad into the solution finding process. Only chancellor Angela Merkel did not yet express her view to the topic. It is likely that the chancellor wants to wait to see which side is getting the upper hand in Washington. Kerry is about to visit Berlin at the weekend where he will inform the chancellor about new developments.

The decision would, if it would really happen, lead to a defeat for the US-Neocons. The group around senator John McCain is rejecting any idea of cooperation with Russia.

This shows the value of Russia taking an ‘aggressive’ position. Pandering to the ZioCon American government only whets their appetite for more concessions.