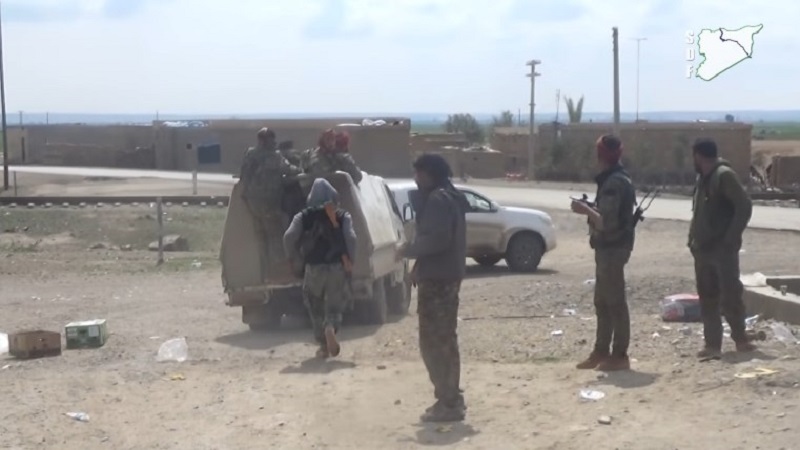 A screenshot from the SDF video

Soon after the Syrian Democratic Forces (SDF) declared the capture of Tabqa Dam (or at least a major part of it), the SDF press center published a video showing the mobilization of its fighters in the eastern countryside of Raqqa a few kilometers from the 17th Reserve Division HQ.

In another video, the SDF called Deir Ezzor residents presented in the provinces of Aleppo and Idlib, and in Turkey to enlist in the anti-ISIS coalition to liberate their city. The commander of the Deir Ezzor military council pledged to offer all needed weapons and specialized training to the recruits native to the city located at the Euphrates.

The offensive on Deir Ezzor is not expected to launch soon as the SDF currently focuses on Tabqa and Raqqa, but the statement shows that the US-led coalition has some plan of possible operation in this city.

US-led forces may attack the eastern districts of Raqqa and Tabqa simultaneously to engage the terrorist group’s force on several axes. The ISIS manpower is already depleted and overstretched. The group continues to redeploy fighters from frontlines at eastern Aleppo, Deir Ezzor, and Palmyra to defend its self-proclaimed capital of Raqqah

The SDF advance on Raqqa’s eastern suburbs will de-facto mark the start of the full-scale operation to retake the city from ISIS.

Well, SDF(YPG) are strong bcs they only fight in one front and its in ISIL held Raqqa and they have big support from USA and its SOF, even France, only big city in that area is Raqqa

They have a big glass jaw though, called Turkey. Any moment they run the risk of the Turkish army attacking them in the rear.

Within 2 weeks at most the SAA will be advancing from Palmeria and Deri Azur towards Raqqa. This announcement of an attack at Deir Azur is a US Trump plan / faint to distract ISIS so they don’t bring more reinforcements to Raqqa.. Taking Raqqa will be tough as it is the holly city of the Califate. Let the kurds and the USA sustain big losses there. The SAA can move in to help when the battle is almost over. The Kurds won’t be staying in the Raqqa or any non-kurdish area once the Turkish army launches a full scale invasion to attack them in North East Syria, which may be any day from the looks of it.

Good news in Hama as well. Now the SAA and Russia must make sure those terrorists taking part in the Hama offensive do not escape.

This Turkish dispute with Russia is just part of what I believe is a Russian / Turkey secret plan. Turkey threatens Russia etc. while at the same time giving the Zionist empire an ultimatum on the Kurds. Looks like Turkey will pull out of NATO and attack the Kurds in Eastern Syria which is good for Syria, Russia and Turkey as it defeats the Yinon plan to carve up Turkey, Syria and Lebanon for a greater Israel.

It’s no coincidence that Russia just completed its MIR payment system to connect with China’s payment system and possibly Turkey, Iran and Syria and others to replace and bypass SWIFT; as the Zionist empire will certainly cut Turkey out of swift to try to destroy the Turkish economy for leaving NATO and defying the plans of the racist supremacist master Jewish race, so turkey will need to be part of the Russian Mir payment system to avoid economic collapse and regime change.

Wow, quite interesting, if Turkey had been supporting Assad, war would be probably over and they would be in better positipn, they hate Kurds more than Assad

Turkey is a land grabbing nation they grabbed Hatay from Syria and now northern aleppo.

Turkey will get no land and will be happy to survive, though they were falsely promised it by Israel but once Erdogan realized Turkey is to be carved up as part of the Yillon plan, he made up with Russia and has been slowly reversing all polices as fast as he can, since the attempted Israeli coup and Israel’s attempted assassination of him. Erdogan wants to live and for turkey to survive and Russia and China are his only hope in this regard.

Stop whatever you are taking Turkey backs ISIS, Al qaeda, and are about as worse as the zionist, so Russia allowed this “secret plan” to kill Russian pilots really? The turkish backed ES are in Hama backing al qaeda sorry to bust that whatever fantasy you are on.

Turkey began a U turn on all its policies and in Syria and basically everything after Israel and its vassals like the USA, the EU etc. tried to kill him in their attempted coup this past summer. Before that he was doing pretty much as he was told by Israel and its Zionist global empire, but once he realized Turkey is to be carved up as part of the Yillon plan, he made up with Russia and a few days later the coup, no coincidence , where Putin saved his life from Israeli death squads. If Turkey were immune from economic attack by the empire I think Turkey would already have left NATO, totally stopped support for Al Cai Da etc. but they are smart and want to avoid economic collapse, so they need to get ready and find alternatives to SWIFT, for their oil supplies, markets, etc ASAP, but I think SWIFT was the main one which they now have with Russia’s MIR payment system.

Dustil get your facts right The same pilots who shot down the Russian plane on orders from Israel through its conquered vassal America, tried to kill Erdogan during the attempted Israeli coup last summer on orders by Israel again, through its vassal America by trying to shoot down Erdogan’s plane during the coup.

You mean the “fake coup” where Erdogan grabs more power? The only one who benefited from coup is Erdogan. So did the Zionists tell him to pick fights with Netherlands also hahaha.

I am surpised you are on this site as you seem to get all of your info from the Clinton News Network. If Erdogan did not hide out on the Russian base in Syria the coup would have succeeded. How many have to die in an attempted coup for it to be real? Erdogan did know it was coming about 14 hours before as he was warned by Putin which is why it did not succeed

John Brown it was self ochestrated coup well plan by Erdogan to have more power by implementing amendments to the constitution to have more power.It was a fake coup just as 911.All the Gullen supporters in the army didn’t know up to know what happened that fake coup night.Just after the fake coup Syrian invasion started.Russian intelligence were trick to believe it was coup.Real coup could have cause serious blood flow there is no way how you can stop a army in defence or army in overthrow of a government.

Sorry, but this pilot did not try to shoot down Erdogan’s plane at all !! All the facts point into the direction that Erdogan made a self coup to get rid of his opponents.

Blah Blah Blah no one believes your Zionist empire propaganda any more just like no one believed soviet propaganda any more and it collapsed. I di not say they fired missiles. They were sent to intercept Erdogan’s plane but he was not on it, he was at the Russian air base. Just as they keep saying living standards are increasing in what was once the West now conquered vassals of Israel as the standard of living plunges and Jewish theft and corruption explodes as corruption exploded in the Soviet Union at its end. I was the Turkish air force from the Incirlik NATO base that led the coup because they were closet to Israel and the racist supremacist Zionist empire.

I have got tears in my eyes.

Not knowing whether from laughing or crying about this folly.

I agree with the people that say a assault on Deir ez would be the best strategy for elemanating the full control Isis has over territory in Iraq n Syria.I think it is in fact more important then Raqqa.Also politacaly it well help the Kurds to work with Damasacus n Russia for the day after Isis n help with a better future Syria

Deir Azzor is the key stone in the Shia Cresent , if the US , (using the Kurds ) take it , like they did the dam near Raqqa , they (and Israel) have cut Iran and Iraq off from Syria and Lebanon . Deir Azzor and Raqqa together manifest their “Sunnistan” or as the Rand Co. call it an “International Administration Zone” .

Russia , Syria and Iran could lose half of Syria and eventually the whole war if they do not respond to this threat .

Why you got to throw Israel into it ? They never threaten to destroy anyone.Like they have been since their birth.But yeah D E Z is so important.I would attack DEZ and work with Russia n Assad to clear Isis from the area. It could be a foundation for Ass ad m Kurds working together post Isis.I just don’t want Americans there after Isis.We need to bring our people home and eat BBQ n such and enjoy life.Just don’t cut the head off our brothers n we be cool

Israel appears to fear Iran , both have slandered each other . The Kurds backed by the US , just become an American proxy army . The US wants Dier Azzor , not the Kurds , as it is well south of their traditional territory . But once the Kurds have taken

Dier Azzor , the US will not leave , it has the Syrian oil fields .