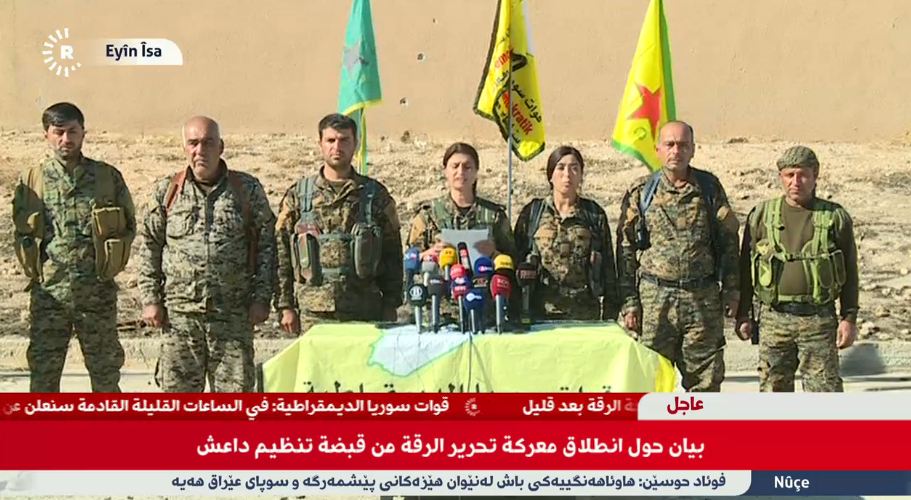 ‘SDF’ commanders during a press conference

The so-called Syrian Democratic Forces (SDN) have announced a military operation, called Angry Euphrates, to take control of the city of Raqqa, the self-proclaimed capital of ISIS in Syria. The operation is supported by the US’ air force and speicla forces. The SDF says that some 30,000 fighters are deployed for the operation.

The SDF mainly consists of the Kurdish People’s Protection Units (YPG) that is an armed wing of the so-called “Democratic Union Party”. The Democratic Union Party is a left-wing Kurdish political party that seized control of some territory in northern Syria. The brand SDF had been created by the US mainstream media in order to hide the Kurdish nature of the group. A key US ally in the region, Turkey, has significant tensions with the YPG.

The Angry Euphrates was announced by SDF on November 6 in a press conference in the Syrian town of Ain Issa, some 60 km northwest of Raqqa. The SDF commanders said the goal of the operation is to liberate the Syrian city of Raqqa from ISIS and a command center to coordinate with the US-led coalition had already been set up. According to reports, the first step of the operation will be to isolate Raqqa.

The YPG launched the advance from the town of Ain Issa and already seized the villages of Wahid, Umm Safa, Wasita, Haran, and Jurah on the way to Raqqa.

SDF = US puppets. And Daesh is a CIA creation. “Daesh” takes Syria from Assad and US puppets take Syria from “Daesh”.

it is impossible to take raqqa with only ypg and the US, unless the US has more troops in northen syria as they have claimed.

so what is the purpose of this operation? with the recent developement, we could even say that every party in the syrian war are now allied against the turks. and yet, turks don’t seem to be much worried. everyone is now playing cool, but i think this is the most dangerous situation, everybody is playing with fire.

IS was the buffer party in this war. without IS, the conflict won’t have that buffer party anymore. that will open the next phase of this war. how will this develope..?……

Good questions. The US must know that taking Raqqa with the Kurds will anger Ankara to no end, Erdogan wants to cut chunks out of Syria and Iraq for himself, but the US seems to be acting against his interests.

But Erdogan may not be on Russia’s side either, they are very close to Aleppo. At some point the Turks are going to have to clash with either Russia or the US-YPG.

Just my opinion, Syria’s people are really messed up… How a city of 220,000 like Raqqa gets rolled by few ISIS, Then they let their Christian and Shia neighbours buy it..or watch them flee. Yes…some rebellion,…..yet ISIS takes Raqqa easy.

If your Russia. …are you willing to cost up as in Chechnya for Syria? Especially when Empire is raging in anger…

Or do you consider the down the road future where powerful Eurasia and Silk Road, Surround this messed up Syrian hinterland….which is going to economically be what?

Empire of course can print money out of thin air and send mercs forever to have their way. It’s probable a war will break out. Ukraine and Baltic are more important than cost of rescue the messed up Syria hinterland.

We find out soon how bad Empire wants the Sunni kookistan,…which Kurds will govern?

it was the nusra who gave the city to IS. remember IS appeared later in the war and at the begining nusra and IS were allies.

They probably want to increase their importance in the reshuffling of regional influences facilitated by the euphrates shield. perhaps it was also a nudge by the US (i mean, US servicemen are taking part) to balance out Erdogan’s invasion. perhaps US promised them something. but if it comes to that, i’d put my money on russian promises. one hopes the kurds would learn what trusting USA leads to by now… digging in against turkish army and negotiating russian support for peace talks w syrian govenrment about their new status within syria and subsequent cooperation with Russians and syrian gov. against ISIS would seem much more promising than just bleeding out against ISIS.