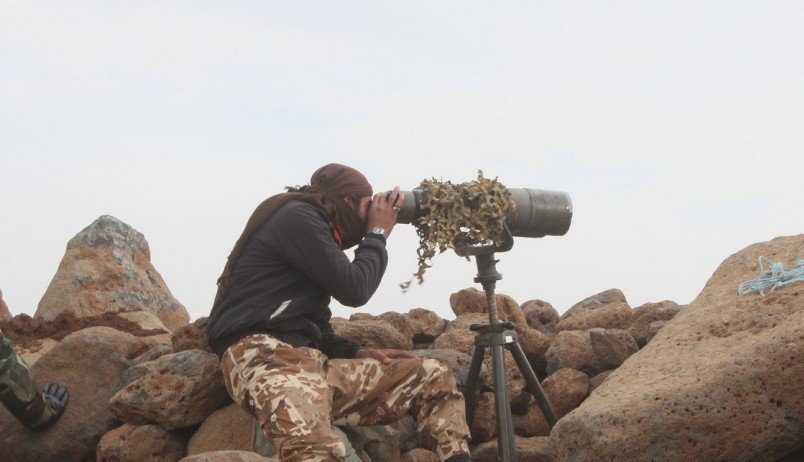 The two sides didn’t announce the ceasefire officially or reveal any of its details. However, it is clear that the agreement is aimed at countering the ongoing military operation of the Syrian Arab Army (SAA) and its allies in the southern governorates of Daraa and al-Quneitra.

Since the beginning of this year, the Khalid ibn al-Walid Army has launched many attacks against the FSA and has killed dozens of US-backed fighters in Daraa. From its side, the FSA coordinated with Israel against the ISIS-affiliated group and launched two failed attacks on its positions.

The agreement will likely fail, as the SAA and its allies appear to be only days away from capturing the entire eastern Daraa countryside. Once the battle starts in the western countryside, ISIS will likely take advantage of the chaos and expand in the remaining positions of the FSA, as it did in the northeastern Hama countryside before.

ISIS group might wait till FSA lines are thinned out, and then strike from the rear. This would be interesting. :)

What would be the point though? As Idlib and Yarmouk have proven, once the SAA finishes off the bigger FSA/Al Nusra fish, the smaller ISIS fish will be next. Whatever FSA remains ISIS will manage to gobble up, it will get smashed in the end. Basically their only chance is band together with the FSA and Al Nusra. Either they hang together or they will hang separately. But I guess (and hope) there is no honor among thieves. Or in this case murderous Jihadi scum.

“What would be the point though”?

Dear Barba_Papa, I have great respect for you but I think you fully understand the mindset of this particular headchopper group ISIS. They don’t think “strategically” or what would make sense. Whether it’s “moderate” Islamist headchoppers, Taliban, fellow Nusra fighters, or Americans, Iranians, Russians or Syrians, or anyone else for that matter, weak or strong, that opposes them and has control of any adjacent territory. They only care about slaughtering and subjugating anyone and everyone who doesn’t tow 100% to their tyrannical ideology. If they end up dying in the process or benefiting the greater of 2 “evils” (from their point of view), it literally doesn’t matter. They are a suicidal fanatical cult of brainwashed maniacs who wish to live, and force the world to live EXACTLY as they think people lived in 7th century Arabia (and I say as they “think” because the historical record from that time is very scant and dubious to begin with).

If these people actually cared about reality and realistically “winning” anything at all in the geopolitical conflict arena, they might’ve thought of and taken into account the stuff you said here. But they don’t think this way. They believe with 100% conviction that they are going to pull off some prophetic end-times victory, and that’s the ONLY thing that matters. That reality might be strongly suggesting that their “belief” is actually wrong is completely over their head. These people literally don’t know how to think logically or strategically. Their perverse, butchered version of Islamist ideology does all the thinking for them.

You are correct about what happened in Hama, where both they and HTS got fucked up by the SAA after interrebel fighting. But then again, you need to understand that this is just natural selection at work. :)

Asking “what is the point” is like asking a delusional moron who is convinced he can fly what the “point” of jumping off a skyscraper without a parachute or safety equipment is. These people are literally convinced that they will fly.

Need to realize all these groups are no different from one another and under 2254 are all subjected as terrorists under that heading and not worthy of any consideration otherwise. This has been as much admitted years ago they are one and the same.

SAA has no excuse now to leave any of the scum standing.

I’m surprised that those ISIS wannabe’s are still still around. They started off holding a few villages down by the river then managed to get a toe-hold on higher ground by moving into demolished villages that were abandoned by al-Nusra and the FSA. Then they fought with both of them and gained more abandoned demolished villages. They seemed to be stuck in their ruins for the longest time until al-Nusra ran into problems with the FSA so began to cooperate with those fellow extremists. Then the HTS was formed and started doing battle against them for awhile. I believe they haven’t been eliminated because the territory that bunch holds is worthless strategically and economically.

These guys are so close that when it rains on one, the other sees a rainbow.

This is more like feuding brothers patching up a bickering fight than a ceasefire in the military sense.

They each half of the same whole no different other than name like left side right side. Birds of a feather always flock together as they say.

I smell a rat here, and this is basically to have both of these forces “unite” to fight against the advancing SAA…..

Dear South Front: Please call the FSA the FSA and not “US-backed forces” because these particular militias only ever received small scale support and calling it US backed implies that the US could/would come to their aid and/or change their decisions. The motive for the cease fire is obvious, because ISIS is to small to survive under the full weight of any army and the FSA is busy fighting the SAA. Pro-Russian sources are no doubt milking this for all the propaganda value it’s worth…

In worst case scenario, and by that I mean even IF that’s a total lie, it’s just like “Iran backed Houthis” which I doubt if you have any objection against, despite no presence of Iran in Yemen and no weapons, funds and reinforcement supplied by Iran to the Houthis/Yemen Army, no airdrops, no airlift of “commanders and no training.

At the least we know that the FSA is the bastard of the US-Turkey love affair which Saudis helped to deliver and is maintained by the US and co. support.

The word Reble is to grand a term, it covers many groups that also fight each other. There are parts of the FSA that are Turkish proxies fighting the Kurds, there are Kurdish units south of Afrin that are now taking orders from Assad. But many Rebel groups have radical ideas and for obviously reasons anyone remotely connected with al-Qaeda is not getting US help under any circumstances. . So don’t try to generalize, Syria is a huge mess of interconnected wars.

ISIS-that-never-attacks Israel making a deal with FSA-that-never-attacks Israel. Nothing to see here. Funnily enough, if I were Israel I’d be cuddling up to the moderate arab neighbours. Israel got this completely wrong, and has effectively raised an army against itself. Assad should’ve been their ally, not their enemy – but a house divided against itself cannot stand eh.

Yep, lol. The Israelis get most things wrong and can only stand because of massive support from United Zionists of America. Nuttanyahoo is one of the stupidest leaders in this world. A complete disaster. It is a wonder they get anything done.

They get nothing done. They’re parasites in nature.

Stupid propaganda all the same over and over. Tell me one reason to attack Israel and waste lives of our soldiers? They not started all this, it is product of bloody colonialism since end of 19th century of Gregorian calendar. Our enemies are those who disbelieve not people of the book (Christians, Jews) until they help the enemy plot against us. That is your stupid shiite propaganda to “fight” Israel and kill Sunni Muslims instead. Israel is nothing, and if they keep ignoring us we will keep ignoring them it is simple. And there were deals with them, they have their Jewish state and we want our Islamic state both based on monotheism.

People who disbelieve? You do know that Israeli government is secular, and many atheists there woo, probablu much more than Syria.

And talking about colonialism, Israel is the pinnacle of colonialism, a huge military base serving as the spearhead for globalist neoliberal and socialist materialist interests right in the heart of the middle east in the holy land, yet you say they are not the enemy, but those who disbelieve?!

You are a liar, just a heretic mercenary fighting for dirty money and spreading lying propaganda.

You and the ones like you piss in all holy books. You say you made a deal… we know the type of deal you made.

All Southern Front militant factions are under express contractual rules that they must not attack Israel or their wages will be cut off – whether their paymasters are US/Saudi/Qatari/Israeli – the militants are foreign proxies doing their foreign owners bidding – the latter’s objective was always to manufacture violent chaos and overthrow the current sovereign Syrian republic that has open relations with Iran.

‘…we want our Islamic state both based on monotheism.’

You want to live in a Sunni theocratic state? Pack up and move to Saudi Arabia already.

as
Reply to  ابوعبدالله العراقي

Lol you just exposed yourself shill.

US backed forces and Israel backed forces have been fighting it out. They are both backed by the international bankers who specialise in supplying both sides to prolong any conflict. They’ve now been told to make friends because they can fight SAA. Poor tools. They’ll be wiped out.

FSA : Let’s stop beheading each other and join forces to behead those other guys. ISIS : OK , cool. FSA : This truce will only be temporary. ISIS : Of course.