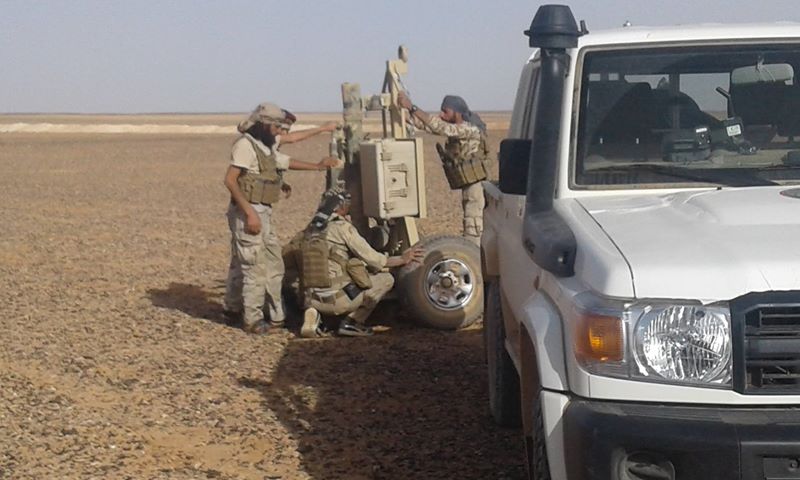 The Damascus government and the US-backed al-Qaryatayn Martyrs Brigade have reached an evacuation agreement, under which the group’s fighters and around 5,000 civilians will be allowed to withdraw from the Rukban refugee camp, south of the border area of al-Tanaf, to the Euphrates Shield-held area in the northern Aleppo countryside, the Syrian Observatory for Human Rights (SOHR) reported on September 16.

According to the UK-based monitoring group, the agreement, which will be supervised by Russia, was reached after the mediation of a former commander of the Free Syrian Army (FSA) in the region of Eastern Qalamun. The evacuation process is expected to begin in the upcoming few days.

The al-Qaryatayn Martyrs Brigade, which was trained and equipped by the U.S., participated in major attack on the Syrian Arab Army (SAA) in the Damascus desert last year. However, the group failed to make any gains or even to stop the SAA advance. After that, the U.S. suspended its support and left the group in the al-Rukban camp with no resources what so ever.

In the last year, many individuals left the 55km de-escalation zone around al-Tanaf under agreements with the Syrian intelligence. However, this is the first time an entire FSA group and thousands of civilians accept an evacuation agreement. This will likely increase the pressure on the US-led coalition, which is determined to keep the border area under its control.

It seems that al-Qaryatayn Martyrs refuse to get martyred…

Russia warned days ago that was ready to launch precise airstrike vs AQM….

Anyway this is a great news for Syrian nation. It seems that one day all FSA group will join SAA.

i doubt USA or Israel will let this bubble go! It literally blocks the Damascus – Bagdad highway!

What excuse can Yanki/Zionist Garbage put forward to stay in Al Tanf when their headchopping proxies ride off through the desert in green buses?

Perhaps they saw how poor the US troops in Al Tanaf are in their mega exercise with about 250 soldiers :)

The U.S. tried very hard to demonstrate their capabilities in al tanf. Now their terrorist ally decides they’re sick of living in east Jordan and want to live with Turkish allies. Apparently the demonstration failed to impress someone.

But I thought these were freedom loving Syrian patriots at Al Tanf?!? ;0

Al-Tanf is just for safety, everybody knows that it’s a card only, not a threat, after all ISIS cells gone in the area, and it has been encircled. (so no ISIS cells can hide further – nowadays it can come from anywhere, as it’s a desert) Syria and Iraq needs to build up a radar system at the border. (anybody enters at least they know – it’s easy in the desert, but really difficult to hold the country in one piece without it)

to me it seems they are dividing syria to three pieces.

We ought to be dividing their human forms into three pieces!

For what the Western demonic possessed “elites” have wrought upon Syria, I think it ought to be considered to bring back some forms of Medieval punishment, ie drawing and quartering (or thirds will work also!)

so you suggesting to become like them. Medieval punishments have been created by the same ones we fight today. No a single bullet is enough and let them sort it out with the asshole who created them.

….trying to divide Syria in three pieces. It’s not over yet.

time will tell which one of us is right my friend. I known to be wrong in the past about details but never of the out come of a conflict. You never allow an enemy and a dangerous one at that to ever have the initiative as well the upper hand unless, the game is fix and agreed between rivals.

So either russia is not what they claim they are and stand for, or is been compromised in high levels. Like this one for example. So what is your explanation?

Russian President Vladimir Putin and Turkish President Recep Tayyip Erdogan announced that Russia and Turkey have agreed to establish a demilitarised zone in Idlib by 15 October, along the contact line of the armed opposition and the Syrian army, during a joint press statement following a meeting in Sochi on Monday.

Relax. I wish Syria was cleared from invaders. I wish Erdogan was a man of dignity. I wish Putin did not discuss anything with him but ordered him back home, chopped off the land stolen from you and from us, give authonomy to kurds, so that they don’t stir more troubles for Syria and Irak. but…. as you see it did not happen. I guess it has something to do with the election in the usa in November. I guess there is a deal between Trump and Putin. I guess we are not told all that happens behind closed doors. It might be a blessing in disguise. One good point: Putin and Erdo make a joint statement ! 2. Syria is ok with that. 3. Iran is ok with that. 4.It’s a show of good will, you don’t see americans participating. They will have no grounds to shell Syria again.

Well you might think you are wise, but I will take the teachings of Sun Tzu before your barbarian outlook

Syria is merely a skirmish, you cannot see the forest for the trees.

To Russia, that is of no consequence, as long as they can stop the US building its pipeline, the US will never recover the money it has spent in Syria. Try and broaden your view.

All wars are about money

All wars are about material, and power over that material.

The confusing thing about saying ‘money’ is that most people think federal reserve note, dollar, lira, peso, etc… and this paper is not what wars are about.

Yes you are right, people do think that currencies are money, when really they are just IOU’s. I think of money as, a bag of wheat, a barrel of oil, an ounce of gold, not pieces of paper with a number written on it.

kid I am not going to discuss with you your obsession about money and why things are happening in global scale. Grown up and smell the roses and wars are not about money is about resources and controlling power.

By the way what have you failed to understand that money, (FIAT) is just a tool of controlling the slaves,(YOU) and does not apply to them?

I will explain it to you, fiat currencies are not money, they are IOU’s gold is money. Gold is money, everything else is credit(JP Morgan)

Try first to comprehend what you reading trying to educate yourself, then proceed to advice others and learn also to respond to what others answer to you and not play smart ass.

You are not that intelligent or educated as you like to think and attempt to present yourself. The only reason I am responding to you is because your heart even based on very wrong conclusions, still reach the right path.

Are you intentionally this ignorant, or you think you speak to someone who need you, to explain him about currencies and IOUs?

“According to the UK-based monitoring group”? “MI6 front organisation”, if you please.

They will move to Allepo governorate and what then…in the end, lay weapons down…much better, do it right now, war is almost over…

HA!!! US always drops losers like a web diaper.. They still hold Al Qeuda and ISIS or Maghawir al-Thurah terrorists to protect their illegally occupied base.

No more human shields for the US troops. The US has already and illegally built an airport there. That can only mean one thing. They are not listening or working for the interests of Syria. With most of their patsy’s gone, it’s going to be pretty quiet, until Syrian and Russian forces get there and flatten it.