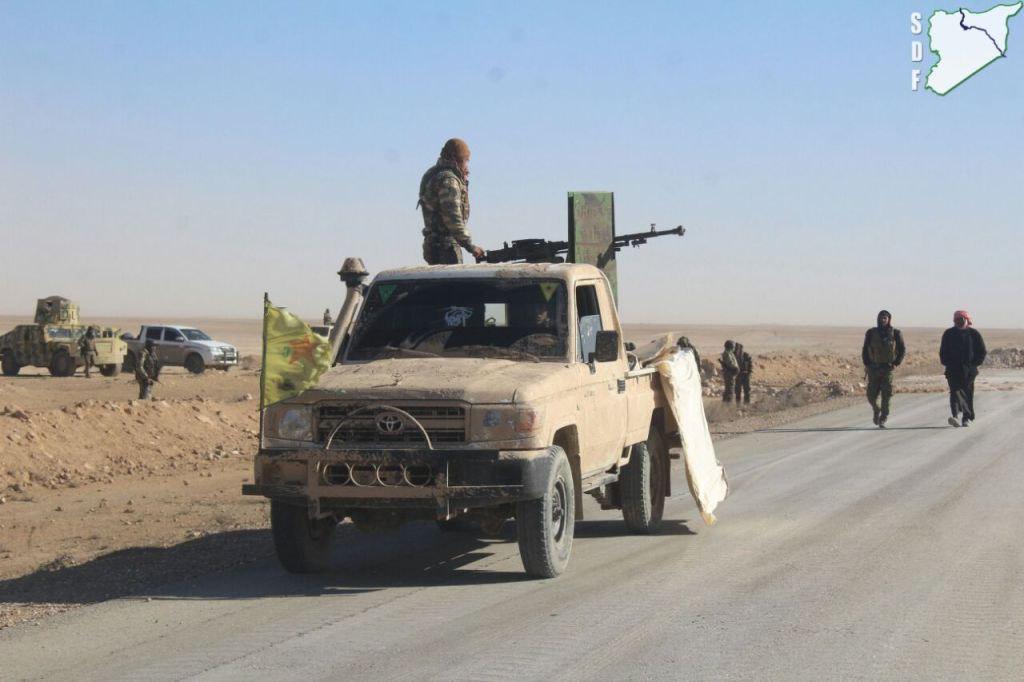 The US-backed Syrian Democratic Forces (SDF) has captured villages of Mushayrfah al-Shahnat and al-Ghassaniyah in the eastern countryside of Raqqa. Al-Ghashaniyah is located in 27 km from the city of Raqqa. The seizure of Al-Ghashaniyah has reduced the distance between Abu al-Khashab and Beer al-Haba’a to about 5 km.

This advance has been made after a successful airborne operation carried out by US Special Forces and special SDF units near the ISIS stronghold of Tabqa. 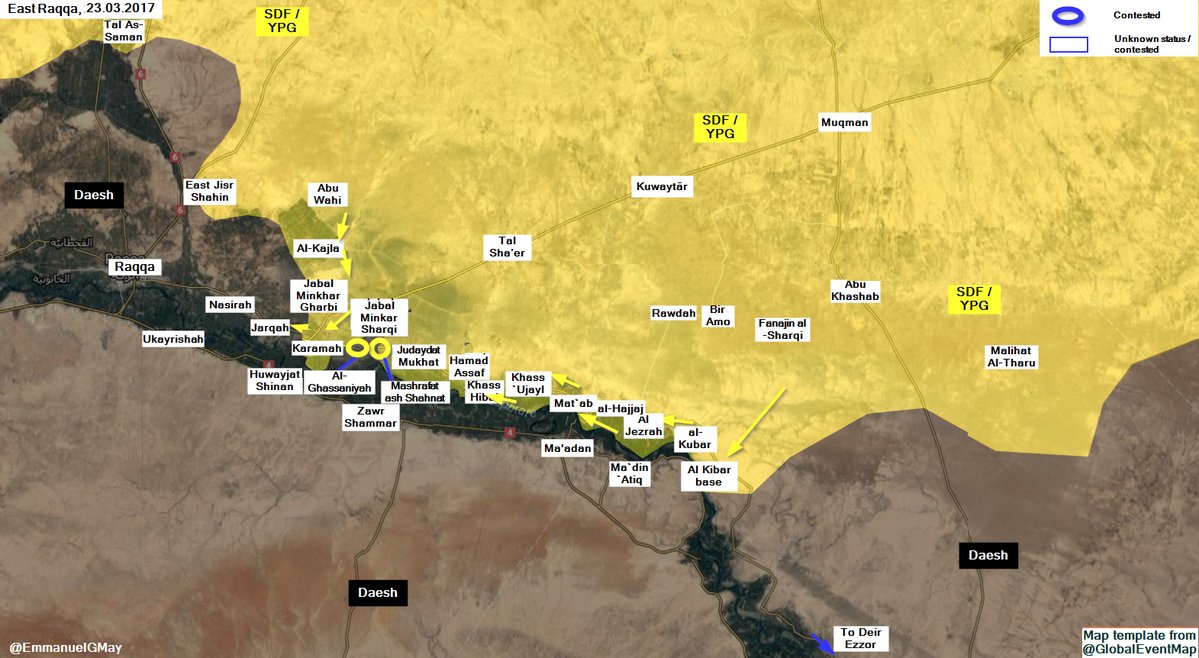 Op Euphrates Wrath spokesperson Jihan Sheikh Ahmad stated that this operation proved the large capabilities the SDF possessed and its increasingly-effective coordination with the anti-ISIS Coalition forces on the ground. 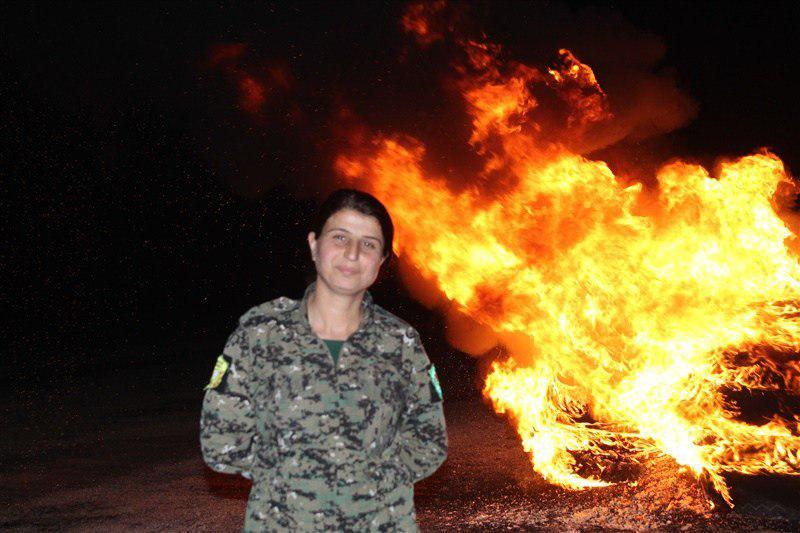 The SDF is expected to continue its swift advance in Raqqa and Tabqa’s countrysides. Though the city assault isn’t expected in the nearest future. The SDF suffers lack of man power and needs to regroup before starting of such a daunting task. The United States continues to transport military equipment and Kurdish fighters from its bases in Iraq to SDF areas in Syria.

I’m proud to hear this. America militar is still the best in the world overall!All I hear is negitive shit about America on south front.Just damn don’t fight a ground war against Russia or any war for that matter against a major power. With the integration of the world economy there will be no true winner. The one exception is Iran.They are America num 1 enemy next to terrorism.

Those Iranians.. sending their aircraft carriers to patrol around the US, sending those nasty Houthi’s across to attack the US, fighting those good US proxies, ISIS and AQ in Syria, sanctioning the US. Terrible people. Judging by what’s going on in yankland at the moment, those nasty Iranians have even got the empire trying to tear its own guts out.

I have met plenty of Persians in US happy to get out of their Islamic Persian hellhole. Biggest obstacle working deal with Iranians is Israel and radicals in Iran. Far as I am concerned both are poison.

you are the greatest terrorists in the world. will come day D, when on the streets will be killed americans al al deuterte method. in the whole world.

It appears that the Europens will die first from this Jihadist invasion. LOL

no way. uncle adolf showed the way out

So you support Jihadist and ISUS attacks against all civilians? You must be a supporter?

no, i support the killing of jihadists.

Ummm, lest we forget, how many Russians your good comrade Stalin killed. More than US you fucking idiot. How about peace between both counties.

it would be glad. and FYI, i do not like pogroms and mr. lynch. i never would partiipate on such bestialities. but i know the people, and i know, if the intensity of hate reaches the critical point, it detonates. look at french revolution. and the americans can easily and simkilarly in the world. i konow lot of americans, most of them are normal people. but the amrican policy, to conserve hegemony, this makes only new and new enemies.

U are so deluded and misinformed its not even funny

The Syrians don’t want the U.S. or their equipment in their country at all, and the Syrian Kurds don’t want the U.S.-trained Iraqi mercenary supposedly-Kurd thugs in Syrian Kurdistan (or whatever they’re calling it today). The worst possible way to fight ISIS is to send military forces into ground they hold.

I wish I could be as proud of America as John Williams, but I’ll shake my head in sadness and shame until the day (which I’ll never see) when the U.S. does the one thing that actually WILL stop ISIS everywhere: Nuke their masters in Riyadh and Doha. I can only hope our ‘enemy’ Iran does us the favor first.

I do not understand your point. You are upset that ISUS can be taken? Daesh will be destroyed, and there is nothing you can do about it !

No I think he’s upset that the US isn’t attacking the countries that are financing and supporting daesh and that’s what makes him not proud and I gotta say I feel the same way. If US really wanted to stop ISIS they would have been helping SAA directly and asked Assad permission firstly and not bombing schools and mosques

“…You are upset that ISUS can be taken? Daesh will be destroyed, and there is nothing you can do about it !…”

I’m more upset that YOU seem to believe ‘taking ISIS’ will actually accomplish anything. You seem intelligent, PZIVJ. Do you really believe that taking out the foot soldiers of an international criminal mafia will suddenly make that criminal mafia’s leaders cower in fear and disappear from the Middle East forever? ISIS is a contrivance of the west, Israel and their GCC cronies. It cannot be ‘taken out’ the same way as the Taliban and al Qaeda cannot and never will be ‘taken out’. Their paymasters simply rename the survivors, give them different uniforms and move them elsewhere. A bunch of their hapless dupe foot soldiers are slaughtered (no love lost there) but that doesn’t destroy their creators and enablers. ISIS is simply the specific version of western-created terrorists that is fighting in Syria and Iraq today. I will be glad when ISIS is eradicated from Syria and Iraq, but that isn’t going to stop another western/GCC/Israeli scheme to destabilize the area. Their goal is a ruined and dysfunctional Syria and Iraq. ISIS/al Qaeda will be back there (or just revived) in a few years under a different flag.

“…But then again you wish for WWIII…”

I expect WW III because there are psychopaths driving the bus – I do not wish for it, THEY do. Recognizing that fact does not mean I endorse it.

“…Have you served, there is a great difference between shame and pride…”

Do you mean fake pride? I served (or so I thought at the time) the Constitution of the U.S. and all that it embodies, not a high school football team. My sense of pride or shame is not linked to artificial military valor concocted by the MSM and regurgitated by the U.S. public, nor is it linked to the uniform I wore nor my military occupation. It IS intimately linked with the behavior of the U.S. as a nation and its effect on everyone else on earth. I am responsible for ALL of the consequences of that behavior on every last person in any other nation. There were plenty of things the U.S. did that give me a sense of pride, but the last few decades of acts so unconstitutional, self-serving, inhumane and exploitative that I’m quite ashamed of the U.S.

Whether anyone ever wore a U.S. military uniform or not has NOTHING to do with their rightful observation that the U.S. today is an international asshole serving masters and causes that have absolutely nothing to do with the U.S. Constitution or the benefit of the ‘little people’ in the U.S.

…”but the last few decades of acts so unconstitutional, self-serving, inhumane and exploitative”…

Truth and decent treatment of it own citizens disappear, end result is slow decay into ruin. MSM is not the only enemy, the people within deep state shadow government & certain three letter agencies are worse. Pave Way IV ,as an outside observer I could not agree with you more

SDF is more like 100.000. YPG, incl YPJ, is now 70k+. Do not forget that they have two separate forces as there is no link between Afrin canton on the one side and Kobane and Jazira canton at the other side. The forces of SDF remain dispersed as they need to be prepared against attacks by Turkey and IS, so many units around the cities. This is why the HXP, the conscript army, is being expanded rapidly as they are taking over garrison duties and thereby freeing up many SDF units. Expect the SDF to be more mobile within say half a year.

The SDF doesn’t have a problem with recruitment either from the general population of the regions they’ve been liberating. They expect to have over 100,000 trained fighters by the end of the year.

yeah what the heck is OP going on about, they have tons of fighters. And even though most is YPG, lots of arabs turkmen and christians too.

I expect the SDF will now cross the river at two locations to force ISIS traffic to use the desert highways and roads where their movements can’t be concealed.