On May 20, the US-backed Syrian Democratic Forces (SDF) launched a large-scale attack on ISIS positions in the town of Hajin along the eastern bank of the Euphrates River in the southeastern Deir Ezzor countryside, according to the Syrian pro-opposition news outlet Enab Baladi.

Enab Baladi said that warplanes of the US-led coalition as well as French special forces are currently supporting the SDF attack on Hajin. However, the US-backed force havs not managed to capture any position yet.

Hajin is considered the last stronghold of ISIS in the Euphrates River valley. Over 1,500 fighters of ISIS are believed to be hiding in the town and several villages north and south of it.

The SDF successfully isolated the remaining fighters of ISIS in Hajin and the areas around it from the Syrian-Iraqi border on May 14 after capturing the key village of al-Baghuz, 30km south of Hajin.

Local observers believe that the SDF will not be able to capture Hajin soon as ISIS fighters there are well-experienced and heavily armed. Earlier this year, ISIS repelled two large attacks by the SDF on Hajin despite the heavy bombardment of the US-led coalition.

There they go play acting again.
Maybe they are trying to win the White Helmets Oscar.

That’s shoa business for you Jerry. The best crap Hollywood can provide.

I am awaiting the “Victory” speech by Bump – along the same lines as George w. did after Iraq disaster. 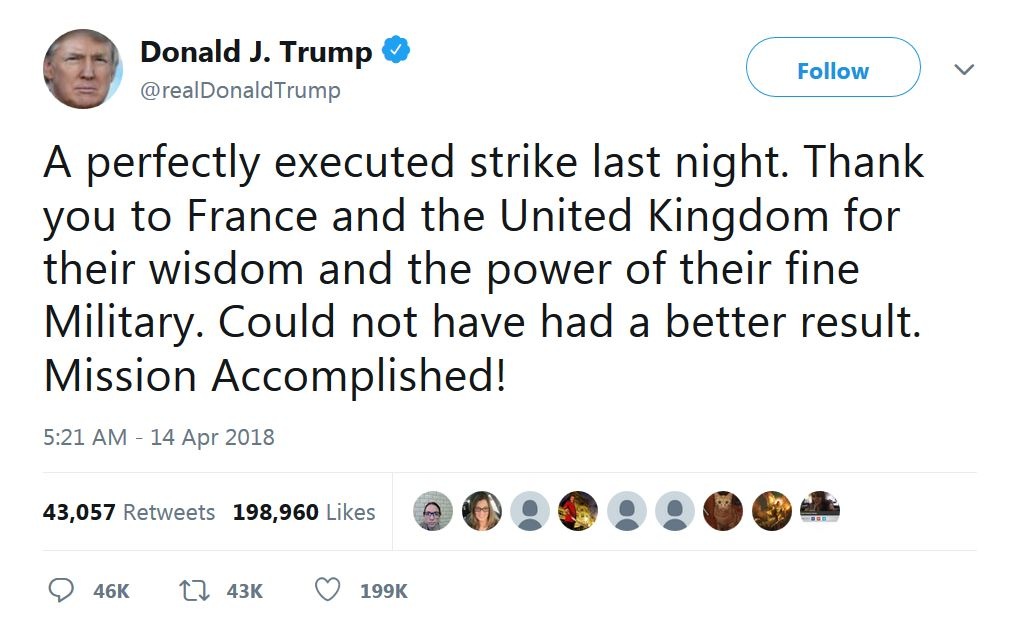 Hahahaha – I missed that, thanks.

Music’s kinda shitty. SAA videos have much better tracks than this dribble.

People are welcoming the liberators, GO OUT RUSSIANS, GO OUT AMERICANS THERE IS NO EXCUSE FOR YOU TO STAY.
https://youtu.be/wx2RPDGiW5g?t=23s

There’s no excuse for savage rats like you to even exist. You’re not “liberating” anything, you’re just going to get ground up and become irrelevant.

The Prophet said, “Whoever believes in Allah and His Apostle, offer prayer perfectly and fasts the month of Ramadan, will rightfully be granted Paradise by Allah, no matter whether he fights in Allah’s Cause or remains in the land where he is born.” The people said, “O Allah’s Apostle! Shall we acquaint the people with the is good news?” He said, “Paradise has one-hundred grades which Allah has reserved for the Mujahidin who fight in His Cause, and the distance between each of two grades is like the distance between the Heaven and the Earth. So, when you ask Allah (for something), ask for Al-firdaus which is the best and highest part of Paradise.” The Prophet also said, ‘Above it (i.e. Al-Firdaus) is the Throne of Beneficent (i.e. Allah), and from it originate the rivers of Paradise.

Religion (Christian, Judean, Muslim, whatever) is the excuse uses by some human being to kill is brother (because all came from the same family of hominids). All religions must be erase from the world. God is not a religion.

I replied to you politely in Arabic and SouthFront deleted it.

They banned Arabic language i tried to respond to her too but both commends are flagged as spam.

Thanks for letting me know. I was getting annoyed with SF.

Most of the Brits here support you. Not the West or Occupied Palestine.
Do you really want to attack us?

STORMING ISIS TO RESCUE OR KILL THEM

Rescue the willing and kill the disenchanted I would think.

hamster
Reply to  MADE MAKER

Probably to kill or imprison.

The USA has put ISIS there. Then pretend to fight them…going on for years.

You see nothing, you hear nothing, it’s not logical but believe the US of A !!!

My crack is better than Collin Powell’s one.

How much you pay?

I may chock you but it’s free !!! But, Collin Powell is paying his dope.

The world has became very strange.

Most of us here do not believe what the US says about most things, but sadly many of the sheep still fail to think about the absurdity of what the US does say.

Humans are very strange. “god” did a very bad job by “creating” these stupid creatures.

It is not from God. It is the System.

I came to the conclusion that “god” could not have created such pathetic creatures.

I came to the conclusion that animals created Satan who created humans who then created God to try and make themselves feel better about their own pathetic and wicked existence.

It makes no sense.

That’s because you’re too stupid to understand. It makes perfect sense unlike what you said.

You are too stupid to even think. Poor you. How can a cat create Satan ?? XD.

Animals created Satan by creating conflict, conflict is evil, so when conflict was created, Satan was created. Mankind was created in Satan’s image, but due to shame of its own evils decided to create god, so that humans could lie to themselves and pretend they are good and are “gods chosen people”. Makes perfect fucking sense.

What kind of a degenerate retard comes up with shit like that. XD

I don’t need to “think” too much to even respond to you. You bullshit is self evident, no thinking needed. Go take a hike, crackhead.

First, if there is satan, he came before animals. Don’t undertsand how a cat can create Satan.
Second, don’t understand why do you distinguish humans and animals.

“Satan create animals + humans, God create light, water, trees…” It’s not what I believe but it is a very theory if you like this god-related things.

Even when people think about paradise, they think about light, a little river and a tree !!!! Spot on.

Humans are an error and they will be annhilated. And as the dots are connected, humans can’t escape, they can’t go faster than the speed of …. light and can’t live without light and water and trees which will make them impossible to escape.

Fair enough. Have you ever thought about the System and its impact on humanity?

Who created the System ?

The treacherous, greedy dirty jews. It stems from a guy called rothschild.

So, humans do create this system. So, not surprising as they are been created by Satan.

If you equate the jews and satan then yes, they created the System.

Doesn’t help when the US general public elects presidents who have shit for brains.

That is also down to intentionally poor education, especially in historical and current world affairs from all perspectives that would result in more empathy for other nations opinions.

Flag waving is for sheep . Trumps position would indicate some sort of brain. We can reasonably describe Trump as ‘unfit for purpose and lacking in conventional education and manners.

He is cunning though ,with the morals of a snake.

The probelm with third world people is that they think that the west want to help them. XD. But, they are too stupid to understand that they want to colonize them. Try to tell them. They will never ever understand.

1,500 fighters. The question is how many weapons, bullets, and food they have. As usual US air support will prove decisive.

But, it’s so easy to rip off and screw third world people !!!

“brain hacking”? My goodness youre a degenerate…

I’m right. You can brain hack third world people but not the elite !! The funny part is that, surely, you have zero benefit supporting the globalists !!! You are a stupid volunteer. You are like the one you participate to a bank roberry but don’t share the money !!! XD.

The NATO countries involved also coerce the Arab leaders they have suborned to buy very expensive weapons as part of the protection racket to keep the Arab despots in power.

I talked about that in the category of “money stealing”.

I think I described your thoughts well then Serious :)

Big deal. The USSR and now Russia does the same thing.

With whom Bill.
Details please.

What happen where you think that satan is your god and that god is satan ???

A good theory can be that satan have created animals (and so the humans) and god have created nature (light, water and plants). So, is that surprising that abrahamic religion came from a place where there is no water and no trees ????

1. Send your ISIS to locations you want to occupy.

2. Storm the locations where your ISIS were sent.

3. Seize the locations in the name of Freedom and Democracy and occupy them illegally.

Between the article and these comments I bet not 10% of this is true. Maybe less. Painful to read so won’t. In the military and probably they are all the same, the most important thing is how soon do you go home. I hope all the non local combatants can go home soon. Fighting for rich people to make money and gain power burdens the soul.

The tone of the article (Storming…launched a large-scale attack on ISIS positions… etc.) is inaccurate and I’m not sure why.

What is not mentioned is that due to an earlier agreement between the US and Turkey, the SDF/Kurds do not have any heavy arms and as such can’t really fight anyone with serious equipment. It’s why the French have taken over for the US military in providing artillery support, and at the end of the article state:

“Local observers believe that the SDF will not be able to capture Hajin soon as ISIS fighters there are well-experienced and heavily armed.”

This article is mostly propaganda.

ISIS is experiencing what every “Ally” of ours (US) has ever had, we sell them out. The sdf will learn that too some day. That’s the way we roll.

maybe you should join ISIS and help them out!

Ok.. We have US forces attacking US forces?
Does anyone else see the problem here?

NON evidences at all of this strong and incredible storming. However, north american people with the help of CNN, CBS, can FOX can believe whatever foolish thing USA says.