On May 1, the US-backed Syrian Democratic Forces (SDF) annouced the resumption of their anti-ISIS operation in Syria.

“We hereby declare these remaining ISIS areas will be liberated and ISIS terrorists will be purged from our land. We have rearranged our ranks according to the requirements of the battle and announce to the public that our forces with the participation of the international coalition forces have begun the final phase of the Jazeera storm campaign. Over the coming weeks, our heroic forces will liberate these areas, secure the Iraq-Syria border, and end the presence of ISIS in eastern Syria once and for all. We welcome the support of the Iraqi forces across the border and our partners in the international alliance.

These operations will be conducted with a view to the longer term objective of building a new and democratic Syria, free of terrorists, with its territorial integrity intact, and the participation of all Syrian components including the Arabs, Kurds, Syriac Christians, Turkmen heroes of the SDF – in the political process as outlined in UNSCR 2254,” the statement reads.

According to some experts, the resumed anti-ISIS operation in eastern Syria is an attempt by the US to explain to the American audience why the US military has to stay in the war-torn country.

The administration of US President Donald Trump has repeatedly promised to withdraw US troops from Syria. However, so far, these promises have been far away from the reality. In turn, Syria is slowly turning into a new Afghanistan for the US.

“all Syrian components including the Arabs, Kurds, Syriac Christians, Turkmen” of the PKK.

So wanting to blow up the Dome of the Rock is what makes these zionist kurds happy.

If the SDF was serious about removing ISIS, they wouldn’t have stopped the operation that was started last year.

This goes to show the US benefits off of the destruction that ISIS creates.

Turks and kurds are enemies. Assad told the kurds to hand over Afrin to Syria and made multiple peace proposals. All rejected, the kurds would have rather lose the territory to the Turks than Syria because the PKK/YPG is run by Washington.

I don’t believe the SDF really wants to fight ISIS, they need it, but don’t want. However, SAA stopped its operations against ISIS in eastern Syria before the SDF, a big mistake. Therefore, your comment doesn’t make sense to me. 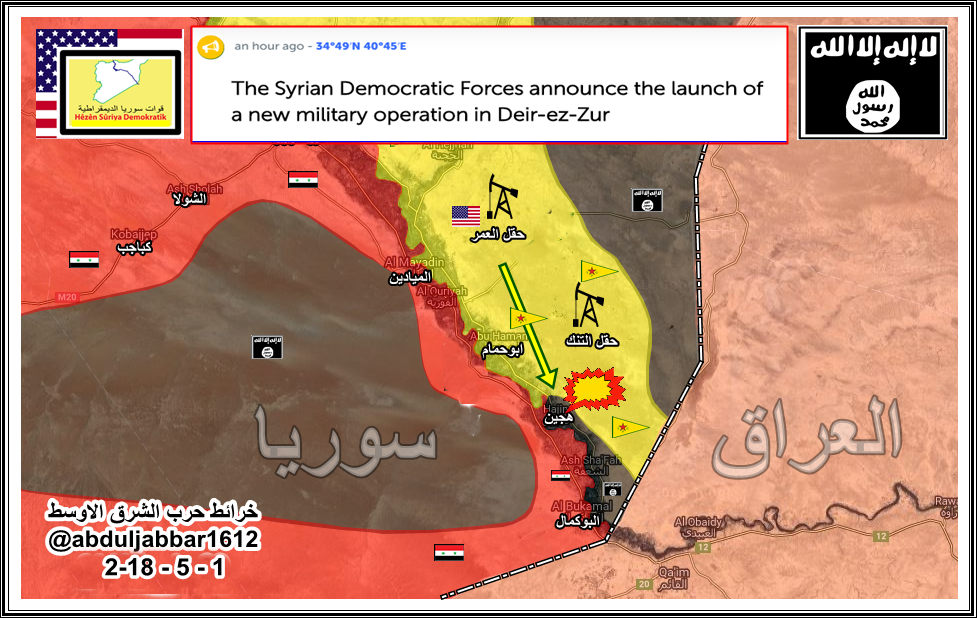 Again? Last week also did this.

Hey, that guy behind the mic with the bandana was wearing a beard last week….

Good point, this is an almost beardless group photo..!

long live the kurds and their struggles

They’re not Democratic nor even Syrian. Wipe them out.

US-backed alliance launches ‘final’ battle against IS in Syria. “Our forces with the forces of the international coalition have started the last stage” says Syrian Democratic Forces. Is this US led coalition operation legitimate without the permission of Syrian government? Absolutely no because the US led coalition is the coalition of perverted leaders…..

Whatever. Those guys remind me of an organ grinder’s monkey. And essentially bibi and co are the organ grinder. Perhaps that’s an unfortunate choice of figure of speech.

The US can do nothing right in some peoples eyes. The whole reason we went into Syria in the first place was because of ISIS, dipsticks! No ulterior motives necessary to explain the evidence.

Read too much Western MSM .
We are all kids, right

Anyone here believe this story?