The US-backed Syrian Democratic Forces (SDF) and its security forces, commonly known as Asayish, launched a large-scale security operation in southeastern Deir Ezzor on May 15.

The operation targeted the remaining ISIS cells in the Middle Euphrates River Valley, especially in the town of al-Shheell, which witnessed a wave of protests against US-backed forces in the last few weeks.

“20 ISIS terrorists and a large quantity of armament were captured and two tunnels were found in the security operation by our forces in village of al-Shheell in the Middle Euphrates River Valley,” Mustafa Bali, a spokesman for the SDF, announced on Twitter.

The Kurdish Hawar News Agency (ANHA) reported that four of the arrested terrorists were participating in al-Shheell protests. Light weapons and signs, with anti-SDF slogans, were found in the terrorists’ hideouts, according to the agency.

“These signs indicate that these mercenaries are were trying to politicize the demonstrations … which were aimed at improving services in the region,” ANHA claimed in its report.

Last week, the SDF and the US-led coalition killed six civilians during a failed security operation in Shheell. The crime provoked a new wave of protests in the town, which was met with a violent response from Asayish.

The recent developments in southeastern Deir Ezzor highlight the military and political failure of the SDF. The Kurdish-dominated group is still incapable of securing the area or bonding with the locals there. kurdish scum of the earth…….

Smaug
Reply to  klove and light

You mustn’t be so hard on yourself

Fuckin fascist racist i will report you.

no his sentiment is accurate, kurds betrayed syria by become usa vassals.

any real irani would know that.

the same kurds that are in MEK actually.

if that makes me fascist, to dislike traitors, call me adolf then.

Assads betrayed Syria as a country since Hafez.

Kurds chose there own destiny by going to bed with usa, Hafez was long dead in the ground before that!

No please tell me more Syria “facts”. try to go at least 3 words without a conditionnal, see how fsr you make it.

Mike, aren’t the Kurds, are the Occalan boys, or prostitutes.

Kurds are being used right now, how many times until they learn dont trust the west.

First when you say “Kurds” means a whole nation if you refer “YPG&PYD” that is something else only in politics but i know you dont have healthy brain to know difference.
Second first of all hafez betrayed kurds by massacring innocents. Then his heyna faced bastard son Assad by deleting syrian kurds identity certificate for 3 million syrian kurds!
Third where was assad and Syrian regime when sare kani & hasaka & afrin &u Kobani was under ISIS & Turkish invasion? Even russia was just watching! When a lesser devil gives you weapon to defend your “FAMILY” against a bigger devil you simply take it you fool!
This was long after assad massacring kurds in stadium kurds because of qamishlo team winning and clashes started! Yea of course you are a Devil killer criminal supporter so you yourself are and yes iranian people and a persian like me know how good and decent our Kurdish brothers and sisters are in iran or syria you fascist scum!

Go see if outside is raining, Mossad/CIA’s rat. And migrate, wonder crusader, because Israel it’s only the Golan Heights 2.

Thts no excuse for behaving like animals Yourself – Unless You are.

jorge
Reply to  klove and light

The scum on earth has no nation, as we can see on Syria, for example.

If they would be now assad would be fucked and turkey be nailed in the ass you mindwashed fool!

It could be one of several versions as well.

Was you that put fire on the saudi ships, crazy zio?

Fuck off madar jende (persian bad insult) we iranians know our beloved kurdish kurdish brothers and sisters they were/are part of Greater Iran since 3000 year old before you insects even come to region we had CIVILIZATION! if now islamic regime of iran is fucking its people and doesnt care about iran things at all doesnt make that iranian irople too hate kurds knly rqcist fascist morons like you hate mations and people and ehnics. When a lesser evil gives you gun against a bigger devil you simply TAKE IT to “DEFEND YOUR FAMILY” this doesnt make them zionist or servants tell that to babykiller assad and traitor russia just stood and watched how kurdish civilians being killed by ISIS & Turkey dogs before even USA had a foot in the region! If you dont have honor to defend your own family at all costs well kurds have a full history of that you fascist.

Didnt you have better things do or say? So what if i join discussions in my 2020 (i just read posts before), What difference does it make?

Now you speak about the Kurds, are you the Kurd’s voice? By the way, you are the voice of what?

What the hell? Improvised explosive sausages? 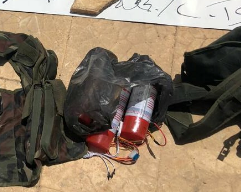 And that thing on the right? Improvised… explosive… oh, my! Well, nevermind. 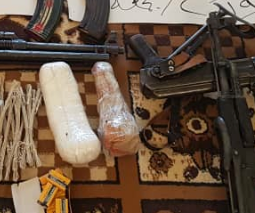 Those are bombs ISIS plants in public toilets.

SDF did not fail military, and only because of Turkish subversive manipulations the impression is created that failed political. But face it in that region are practical no religios tensions only the tribes are making problems because they want more money. If you compare that part of Syria with the rest and certainly the invaded parts, Idlib, Afrin, al Bab etc it isa place of peace with a future.

The Occalan boys future it’s, without any doubt, also your only future, so enjoy the cake. And stop speaking on the name of the Kurds.

What place of peace? Isn’t Idlib and Afrin full of mercenaries now?

Soon will be free.

Wow your not very smart.

Reconcile or surrender to SAA or die.

Syria’s fate has been decided by the Syrian people, they remain loyal to their elected gov and to the SAA.

Not a damn thing you non syrian cheerleaders proclaim will change that fact.

if you think bankrupt america is helping kurds and not using them to toss them away like a used condom, well get some glasses Magoo!

enjoy being a drone!

I keep it also simple:1) what you call legale is very disputable, if not for the Russians and Western interventions 2014/15 there was no Syria anymore only a new Turkish province 2) legale for now? , any real election will oust Assad because he is no beter as Erdogan: dictators and torturer. All Syrians will have their say allso the Kurds. Assad is kept because no reasonable nation want to create a power vacuum, it would only suit gangsters like Erdogan, iran and al-sham. 3) your reaction is no where a contradiction to my observation that the only peacefull region in Syria is The so called Kurdstan. 4) the Kurds are the only reliable initiale fighters : if not for Kobane their would be an Islamistic State because the SAA whas running where the Kurds stood pall. America, the west and Russia maybe far from rich anymore but ( besides other qualities) at least they stick together when it maters and they stand their ground, the middle east only agrees on one thing: that they disagree. The so called Ummah is a joke because since 1400 years you people kill and you exceed in killing each other. 5) I think that will be the result of the ones +500 Syrian who fought and fight each other in this wat it will never end you will stay killing your neighbor, the unbeliever.

It’s not worth passing knowledge to someone that doesn’t grasp centuries of history in the region.

Your reaction is wind, it has no arguments what so ever contradicting the facts, in fact you agree saying that the reason is complex. The reason is: 1) that your ideologie is allowing you to kill people you think are non believers, and non believers are judged by the subjective interpretation of illiterates and is subject to interpretation even among muslims. 2) you fighters are all highly inflammable smart-pants without real education. 3) you Hate it when others are beter off because their is told that you (personaly and as a groupe ) are the chosen and leaders. And you are the opposite. 4) you have not one bit selfreflection, you do not know what ironyh is because you neet it for selfrefection and to clear your mind and vieuw. You do mis ratio because you are told that everything is due to one thong and it isn’t. 5) if it maters and you are not in the majority you flee saying: it was Allahs wich. And this my friend is the reason and all so the reason why you 500.000.000 muslims surrounding 10.000.000 Israeli are whining the last 70 years about Israel and stay living in the middle ages 630, killing each other and looking afraid at that minority because whatever they may lack the got balls.

Regardless,SDF are standing in the way of a peacful settlement. The Syrian state could not have survived without popular support, saying otherwise would be a blatant lie! Syria is a multi.ethnic multi cultural land and it will be kept that way, wether you little fascists like it or not!

LMFAO! Salty little shill aren’t you. Try some yodeling it may clear bs out of your mind.

1) Religion plays no part from our prospective.
2) Use autocorrect, half of what you spew makes 0 sense.
3) Your anger is blatantly transparent through your projection.
4) Drop the ego, it fogs up your ability to have a proper discusion. (But of
course you can’t, your false pride won’t allow it ).
5) Get your facts right. There are 7 million israelis of which 5.5 million are jews…so on and so forth, etc etc etc

You are correct about the autocorrect.
The rest are only apologises why it is like it is and unfounded calling names.
Even your “correction” about the number of jews make piont 5) more correct: 500.000.000 muslims whining about 5.500.000 jews during the last 70 years.

i dont need knowledge like that thanks, id rather be dumb.

My reply was to the shill, Johan, not you.
We’re on the same page.

you projecting peice of shit!

the only safe area is the sdf controlled area, funny thats what the opposite said.

also we aint stupid we know you and your friends support al nusra terrorists.

remember who flooded the euphrates over and over in 2017 deir ez zor battle? in full support of ISIS, it was your HOLY SDF.

SAA killed more isis in Deir Ez zor city dans all your sdf ever did. All SDF Ccan do is call marine artillery to flatten raqqah.

Ah yes Raqqah, how is it going there? a nice arab city with SDF overlords. Thats going to work well if we follow your “text”.

So you can take that Kobane propaganda Bs and set it aside. You and your friends are using and abusing kurds for ISRAELI BENEFITS!! USA supports isis and SDF.

When your head is in the sand your ass is in the air.

Aren’t the Kurds, are the yankie mercenaries, pi, period. All that buy that sh*t are as yankee stupid mercenaries as those stupids believing Occalan is not a Turk.

More like an occupation than salvation. Thought that the idea was to fight terrorists not civilians.

Bolton, this war is won, return to your farm, man, or get a trip to heaven, https://www.youtube.com/watch?v=xbhCPt6PZIU&fbclid=IwAR2gavS-Rbl5dnSfhIeEfQKS3M75qrBMid9TjwaTOcPFJ4DRhWcnHxU_wvU

Bolton is a puppet like the others, surely it would.be great to kill him, sadly there are 1000 bolton’s waiting to step in.

how much ammunition do you have?? hahaha