On Wednesday, the Syrian Democratic Forces (SDF), backed up by US-led coalition warplanes and artillery units advanced against ISIS terroirsts in the southern part of the city of Raqqah and allegely seized some buildings in the neighobrhoods of Shahada and Hisham Abdulmalik.

According to pro-Kurdish sources, the SDF destroyed at least 2 vehicles belonging to the terrorist group and wounded up to 10 ISIS members. Pro-ISIS sources argue that the terrorist group repelled the attacks. In other words, the fighting is ongoing in the area.

It looks like the SDF shifted the goal of its operations in Raqqah after the US-backed force had failed to retake the Old Raqqah area from ISIS. Could anyone confirmed this:

Nice if it was true.

The map is done by one who has been more accurate in following the battle than most , have noticed everyone updates theirs after this one eventually.

Could be. The SDF includes former FSA factions within the MMC (Manbij Military Council) and they still, sometimes, use the FSA flag. Think JAT and the like. Idem for the Elite Forces. MMC is operating south of the Euphrates.

No SAA there, sorry to disappoint you. 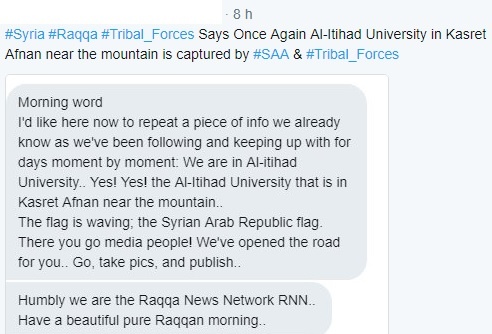 I find this also 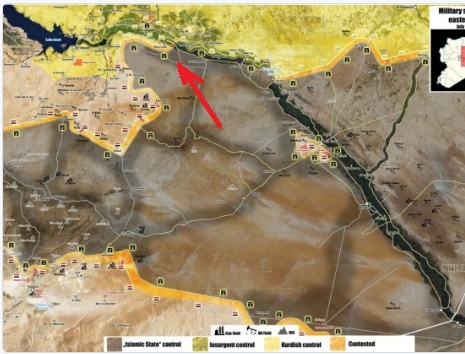 Updates a day later show nothing, no reports from anybody. So, it was fake news.

The only ones really actually fighting ISIS are the SAA and its allies.

Then we wait and see, will we? Fake news abounds here.

Just checking information …I hope it is red flag …

The map you show makes it unlikely, but as I said, it will become clear.

Be careful with that kind of “news”… maybe you´ll wake up and your bed is wet… Unbelivable what find of fanboys posts such kind of fan news… What´s the use of such a kind off lunatics?

This is not my news. First read all of post and then put a comment. And BTW why should i be careful??!! Please calm down and carry on !!

It is typical of the reporting on this site that the language used is often denigrating towards the SDF. This is also being done by denying claims that were never made by SDF.

SDF has entered the quarter east of Yarmouk and there is fighting there. SDF destroyed and seized some armoured vehicles from IS. SDF is advancing within Abdul Malik but never claimed to have taken it. SDF however did report some 32 IS killed, not only ten wounded.

A Zionist Euro for the American-Zionist SDF. Hands off Syria, you dirty SDF Zionists.

Sorry mate. As SDF is not jewish, as far as I know, no zionists there. My priest would also object to him being called jewish instead of catholic. So no zionist there either.

Namecalling and insults only prove you have no arguments, which makes you rather stupid.

U stupid cow, Zionism is an political ideaology but NOT a religion.
Obviously ur uneducated being.

I´m sure ur NOT dutch but huch

Wow! We are all very impressed about you elloquenz, walk on. YAWA! ;-)

Wow! Here we have a disambiguation by an arrogant person .

Why are you so arrogant , Kurds are Khazars also , Levants are the Jews of the old testament not so much modern day ones. Those are converts not of the old blood of the land they try to mix with the old blood, but it is just not that present among the converted people.

FYI khazars were a turkic people and their descendants live in present day kazakhstan/Uzbekistan or were absorbed by the slavic peoples that live in the ukraine/russia and yes, some, mostly of the nobility, converted to Jewry like some others converted to Islam.

The notion of Kurds being Khazars is ludicrous as the Kurds are way older then the Khazars and are of a completely different group of languages (turkic vs iranian). Close relations to the Khazars were the seldjuks (later turks) the turkic Bulgars and the Khazaks.

I do not really care for your nonsense about where people originally came from. Talking like you, all the turks should go to the northern steppes around Mongolia, the Arabs should go back to their Peninsula, the Iranians towards the pontic steppes etc etc.

Phantasy is nice, but we live in the present and cannot ignore that.

Then the Jewish converts should return to Turkey , why aren’t you there yet.

Christians can be Zionists thus the term Christian Zionism.

All u do is complain!
CONSTANTLY!
When we celebrate good news u are always doing the opposite!
I can easily call u a Pessimist which means u are doing to south front what u do to us!
Just bitching all the time!
Just come out and say who u support! Be honest! Stop fucking around on this forum like a child!
I see its the same people always commenting on all pages so one gets to know others well!
I KNOW that u are a bitch! I seen all the crap u write!
Always negative and always skeptical!
This is either trolling or its a part of ur personality!
I believe its the latter!
Therefore please do us a favour, find something else to do, cheer up, admit who u REALLY SUPPORT or just try being a little more positive!
Who gives a fuck if it’s more ISIS fighters dead than whats being said!
I have seen u say that SouthFront OVER STATES SAA kills! So u are fast to call an overstated statistic against the SAA and fast to call out an under estimated stat when its involving the SDF!

Dude, just say it…. say that u back the US forces and the SDF!
Say that u are against the SAA and Russia!
Just do it and stop bitching!

“Just come out and say who u support! Be honest! Stop fucking around on this forum like a child!”

i asked u 3 times to say who u really support!
But u avoided it with “Aint life a bitch”!

What are u scared of?
Why are u trying to hide?
Just say it dude! Im ok if u support USA, Israel and SDF!
Just seems funny that u wont admit it!
Man up!

stupid stupid stupid – what have gone wrong in your childhood? Do all off you realy belive the stuff that you are posting here? Or did you just get paid well to do so? The last thing I would also condamn, but at least it would be a resonable reason…

Dear friend, we kindly recommend you to read articles more carefully. In other case, your comments look like a bad joke. There is a big difference between “seized some buildings in the neighobrhoods of Shahada and Hisham Abdulmalik”, as the original text says, and your allegations about reporting false facts.

In my comment I did not mention false facts at all. I made a comment on the language used. I refer to “alledged” when referring to statements made by SDF, thereby doubting what was said and not doing that where pro IS groups made differing statements on the same subject.

In other articles one can sometimes notice this same trend, reason why I mentioned it.

I see you point.
The article above “VIDEO PKK” appears to be pure anti Kurdish bull shit.