On February 10, the Syrian Democratic Forces (SDF) advanced deep inside the ISIS-held positions in the middle Euphrates River Valley and liberated 2km2 from the terrorist group.

“US-led coalition warplanes carried out 32 airstrikes on positions and fortifications of ISIS, as a result 4 supply roads, 19 positions, a motorcycle, a mortar cannon and an ammo depot were destroyed,” the US-backed group’s press center said in its daily release.

The press center added that the coalition airstrikes and the clashes on the ground killed 37 fighters and commanders of terrorist group in the last 24 hours. A day earlier, the SDF announced that it had launched its final attack on the ISIS-held pocket in the Euphrates Valley. However, several local sources said that the US-led coalition and the terrorist group have reached a secret evacuation agreement.

The situation in the Euphrates Valley will likely become clearer in the upcoming few hours as all reports indicate that the remaining ISIS fighters are now besieged within a very small pocket north of the town of al-Baghuz al-Fawqani.

Instead of saying Sdf=isis and USA are in deep discussions over future terrosm and payments,plus incitement in Venezuela.
What hole superpowers plus best advanced weapons taking years in a Small country.

The Daesh pocket is now so small that you can almost count the houses. The terrorists must be running short of food. Perhaps not necessary to shoot them anymore, just wait for them to faint or drop dead from hunger or come out with their hands up.

i think some agriculture is going on over there. I think looking at the map, it will take a day to overrun. (there isn’t that much suburban area) if they are not negotiating Monday / Tuesday will be the end.

I’m guessing the terms for turning over the remaining US/western hostages held by ISIS are not weakening as the naive U.S. ‘negotiators’ undoubtedly expected. “Hey, they seem willing to die along with the hostages if we don’t guarantee their safe escape and a few sacks of shekels. It’s almost like they want to be martyrs! Who would have thought?”

This is a small area less than a mile wide. The SDF has fire control over the entire zone. All open areas are within sniper range. 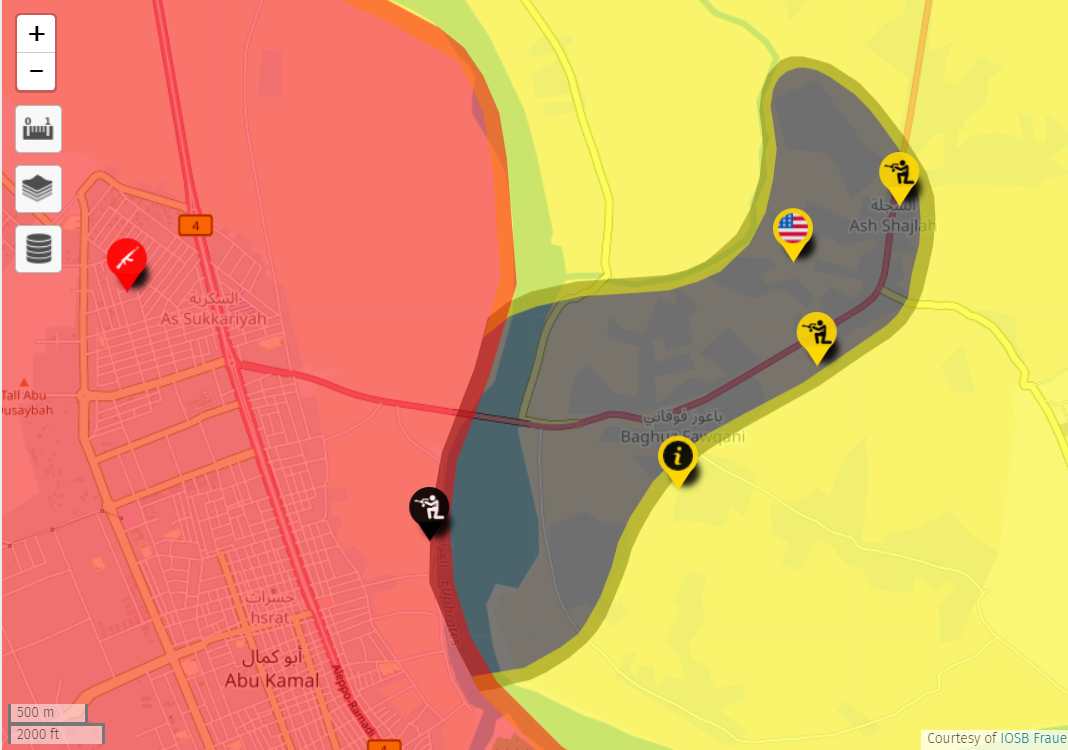 It’s not even very built up. There aren’t a lot of places to hide. Other than bunkers and tunnels. Which is probably where a lot of the terrorists are.

It’s not often you see enemy held territory that is penis shaped. This confirms that ISIS consists of dicks!

Very obvious ISIS =SDF did not agreed yet on new redeployment to Kazakstan border and Venezuela .